All the things I seem to be posting are firsts!  I guess that's part of being a beginner :)  So here we have my first knit top, and my first Sewaholic pattern!  Oh, and my first "wearable muslin".

On the envelope I was size 2 for bust and hips, and size 4 for waist.  I just made a straight size 2, since I'm a crazy rebel, plus I like a fitted waist.

The pattern is for "stable knits", but the man at the fabric recommended a knit with spandex in it.  I think this knit has slightly more stretch, but apparently spandex knits have better recovery.  Or something.

I've heard lots of bloggers say how easy it is, but never mind- I managed to find plenty of challenges for myself.   I didn't even know what the right side was at first (it's the one with the vertical ribs btw, lol), and I got all freaked out about cutting it out!

Then, after reading Lauren's advice about cutting off more of the neckband since my fabric was a bit extra stretchy, I haphazardly hacked off an inch and a half  (3.8cm), and then realised the markings I was supposed to match up weren't right anymore... Hmm.  So I decided I'd just wing it, stretching it to fit and it'd magically work out.  It didn't...

Then I tried doing maths, which is always annoying.  In the end I sort of figured it out.  It still ended up a teeny bit puckered in places.  But you know what?  After I did the zig zag on top it seemed to fix itself!  So that was nice!  After all that though, I don't even know if I needed to hack any off.
I figured out the original pattern's neckband is 12% shorter, so it IS a bit shorter already.  But then again, if Lauren queen of knits says so, it must be so!  But then again, other bloggers have made nice Renfrews without this rigamarole!  So basically, what I'm trying to say is.... I overthink things.  A lot :)

Here are some thoughts on the project:
-I found the internet recommended to use a stitch length of 3 and a width of 0.5.  I always heard you use a zig zag to sew knits but it's so narrow, you can barely tell it is one!  It works though!

-I used a stitch length of 2 and a width of 2 for the zig zag topstitching.

-Not having to finish the seams was weird!  Yet liberating :)  I still wonder if maybe I should have done something to them though?  (I don't have an overlocker).  I trimmed them but I don't even think I needed to do that, for most of them.

-Some of the bits were a bit bulky due to lots of layers.

-Ooh, the fiddly little cuffs were hard to put in!  Having to stretch them while you sew, and they don't even fit around the machine's arm!

-I was expecting the pattern to be really in-depth because of Tasia's really awesome sewalongs (I was disappointed when she said she wasn't doing one for Renfrew), but the pattern instructions were quite simple.  I guess if I succeeded then they were enough!

Overall I'm pretty happy with how this turned out!  Once I got on track, it was satisfyingly fast!  And my husband said it "blew his mind" cos it looked like a shirt you could buy!  Heh heh :)  There are a few fitting issues I'll try to work on before my next one, but that's a post for another day.

I got lots of awkward pictures taken by my husband.  I'm very shy about posing in front of a camera, so most of them turned out pretty bad!  I had to put this one on because it made me laugh.  I was trying to run away from the camera! 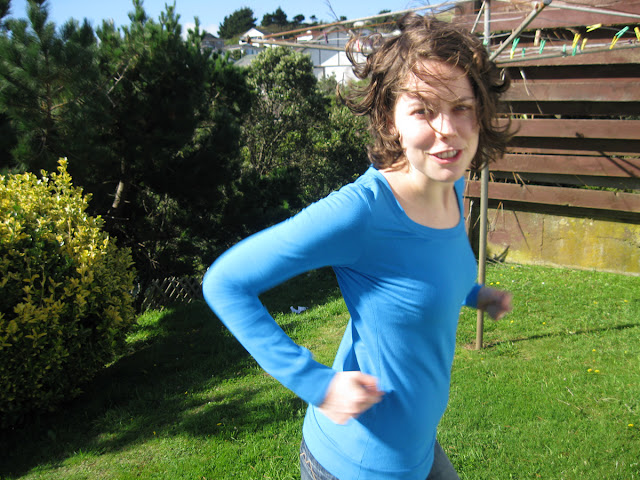