Well, it's been quite a while since I've done a post on fitting.
As usual, the disclaimer is that I have no idea what I'm doing, so take anything I say with a bag of salt :D

I did three toiles for Simplicity 3831, and ended up satisfied with the fit.  I think the floral pattern helped cover up anything dodgy, which is a bonus!  But most of all, it was comfortable to wear which was so great!  (Casting an evil-eyed glance at Vogue 8469)...

This pattern was interesting... I'd never done a small bust adjustment on a pattern without an armscye.  So after fruitless googling, I just went, "Ya know what?  I'm going to make it up.  You're not the boss of me!!"  And I did.  And my next toile didn't explode.  In fact, it looked better.

Anyway, here's a bad photo of my pattern piece: 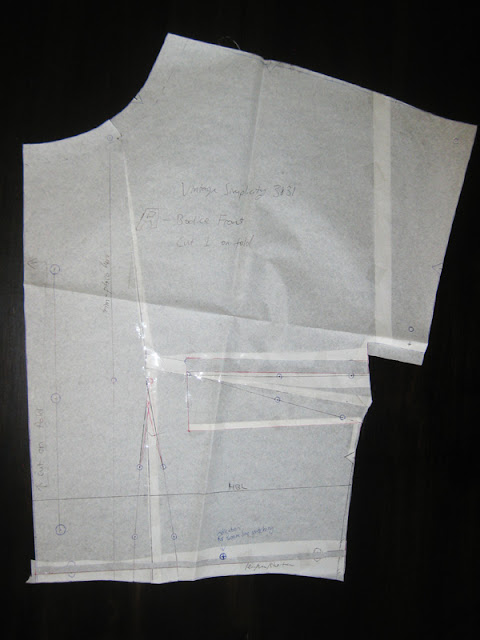 I cut through both darts as usual, but instead of cutting to the armscye, I created a pivot point at the neckine.  I overlapped at the bust point tapering to nothing at the neckline, while adjusting the darts too.  This took out volume from both the darts and the bust point.  It didn't take any horizontal width out like a normal SBA does, but it didn't seem to need it.
This is a confusing pic because I lowered the bust dart later, so it's alteration on alteration!  (That's what that cut out box is!)

I also did something on the back bodice.  I noticed while wearing my toile that my shoulders felt restricted.  I finally noticed strain points at my upper shoulder blades (which seem to cause issues for every fitting).  Aha!  And then I made more stuff up.  lol!
Look at the before and after- I created shoulder darts!

Here is how I did it:  I put it on my body double and noted where the strain was pointing to.  I marked it.  Then I slashed horizontally at that point and noted how the fabric dropped to alleviate the strain.  It opened up and created more length.  How to transfer this to the pattern?  Just make it up, dude.  A slash here and there.... 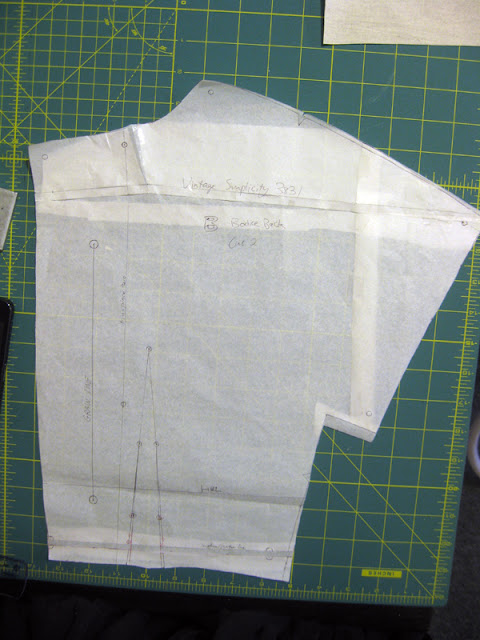 Update:  I found a reference to this alteration in Perfect Fitting by Sarah Veblen, and it's pretty much the same, except you don't pivot at centre back, you just leave the full vertical slash open there, i.e the length added at CB is the same as what you added at the dart.  Am I making this clearer or more confusing?  lol!

Okay, at the best of times my fitting posts leave me feeling like a rambling madman.  This one even more so!
So, do you guys ever just make stuff up when altering your patterns?  Does anyone know why what I did was wrong or right?  I'd love to hear it!
Posted by Johanna at 17:12