Well, after my first attempt at a Renfrew mod turned out a bit underwhelming, I was inspired to try another. I'm really pleased with the result! This was made from remnants from my previous Renfrew so I can consider it a freebee. Yay! 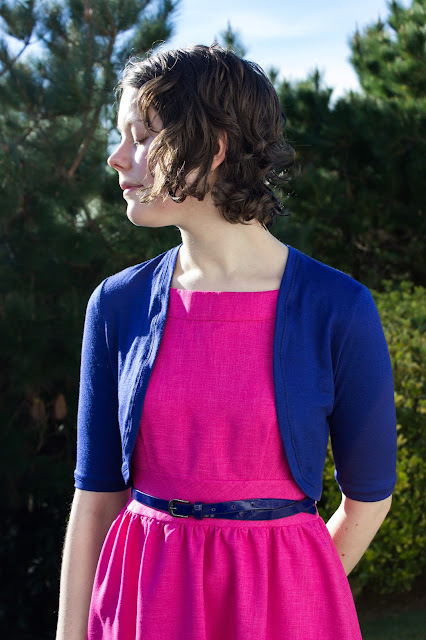 I had an event I was going to and I wanted to wear this dress, but I had nothing to wear on top. Time to invent something! I'm still quite shocked at how well it turned out. I just kinda eyeballed it and drew new lines on the pattern.
Tip: If you're going to be hacking something up as experiment, err on the side of bigger and longer- you can always cut more off, but you can't add it in if it's too small!

I pulled the neckline inwards so it hugged the neck more, and I raised it at the back of the neck too. To figure out where I wanted the lines of the bolero to go, I put on my other Renfrew and tried to gauge where I wanted them... it was very unscientific.
Then when I tried on the cut out bolero, I marked it with pins and hacked off some more.

The hardest part was definitely the band treatment I decided to do around the whole thing, just like the Renfrew top's neckline. However, I wasn't smart enough to realise that while you stretched the band to fit on a neckline, you don't have to at other places!
I mean think about it, the reason you stretch the band is so it hugs towards your body. You don't need that on the hem! Therefore, it puckered inwards and looked silly around the bottom.

The next attempt, I totally overcompensated and had the opposite problem- the band was loose and floppy!! Whoops, cue more annoyance and unpicking. It really didn't help that I'd confidently top-stitched with a zig zag. It took forever to unpick!

The good news is I finally got it right! Yay for perseverance!
So for anyone who wants to have a go at this, here is what I found:
-Stretch firmly at the shoulder seams and back of the neck.
-Don't stretch the band at the front.
-At the curved hem of the front, stretch the band only very slightly.
-Stretch it moderately along the back hem.

Well, that's what seemed to work for me, anyhow. You can see it still looks a skosh wavy at the back hem, so maybe I should have stretched a teeny bit more.
Or maybe it needs it could use a centre back seam tapering inwards at the waist? It's acceptable right now, anyhow.
Oh yeah, and the dress I'm wearing it with is this one I made, and I totally want to make a floofy petticoat for it. And the belt is the first time I've worn a skinny belt! I really like it, so clearly I need more! One in every colour of the rainbow, please. And more floofy skirts with defined waists. 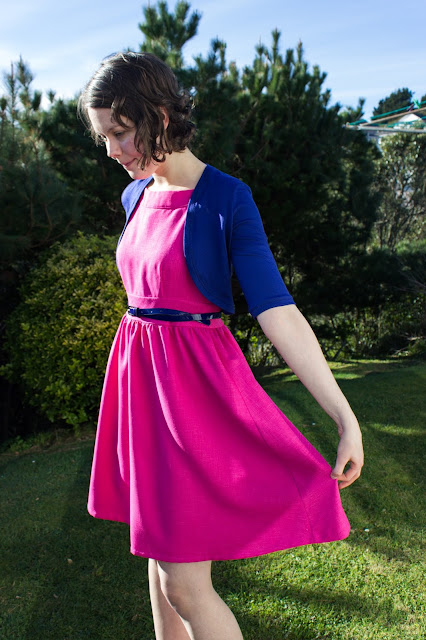 I only had a tiny bit of fabric leftover from last time, so that determined the sleeve length. It felt good squeezing every last drop out of my yardage, haha.

I'll have to resist making boleros from every remnant, I'm already dangerously obsessed with them. I can't stop knitting cropped cardigans, and now I'm sewing them too, eep! 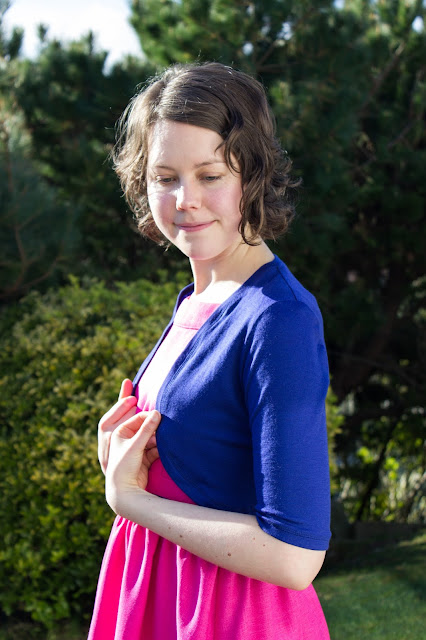