What? An Unselfish Project??

Well, I think this is proof I'm a good wife.

I knitted socks for my husband!
They're not the most impressive thing to look at but I've been intending to make them forever. Poor man wanders around the house in threadbare socks- no wonder he's cold! But no longer!
It's the same pattern I made my first socks from, nothing too fancy. 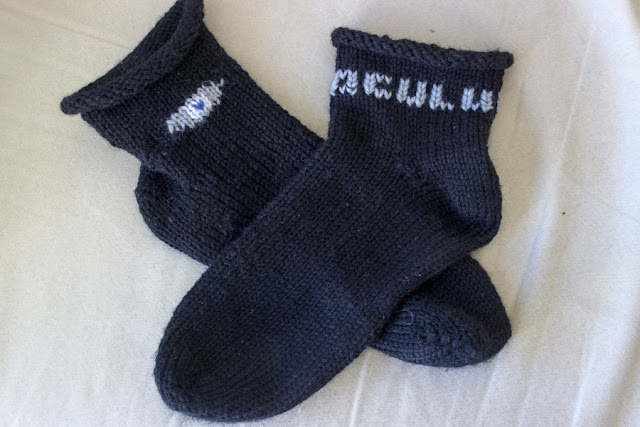 Oh yeah, and the reason there's a creepy eye on them is because I tried to make them themed... You see there's a new virtual reality technology that my husband is pretty obsessed with, called Oculus Rift. So naturally, I wanted to make him Soculus Rifts (I know, cringe-worthy pun. You're welcome!!) So the logo is on one, and Soculus is written on the other. Haha.

I thought I'd try out some new techniques, like teaching myself intarsia knitting, which I've long been curious about. Guess what? Trying to learn a new technique, on double pointed needles, within a tiny circumference is a TERRIBLE idea! It took me forever... what a chore! Heh, that is the reason the motif isn't repeated on the second sock.
Basically you have a bobbin for each blob of colour- can you imagine the chaotic mess?? It was a nightmare. I'd like to try out intarsia again in a less horrible situation, haha!


For the second one I tried out duplicate stitch which is pretty dang easy. I found it's better to do it from the bottom up though. There seems to be less interference from other duplicate stitches that way.

I decided to omit the ribbing so there would be space for the other features to fit. I got this idea when I saw someone else do it on Ravelry! The whole thing is just stocking stitch, which curls over at the top. According to techknitter (an awesome blog which turns knitting into science!), it's one of the sturdiest edges you can get! Too bad I just think it's ugly for most applications. Haha. For this it works great.

And now, I'll be back to selfish crafting. It just feels so right.
Posted by Johanna at 10:38