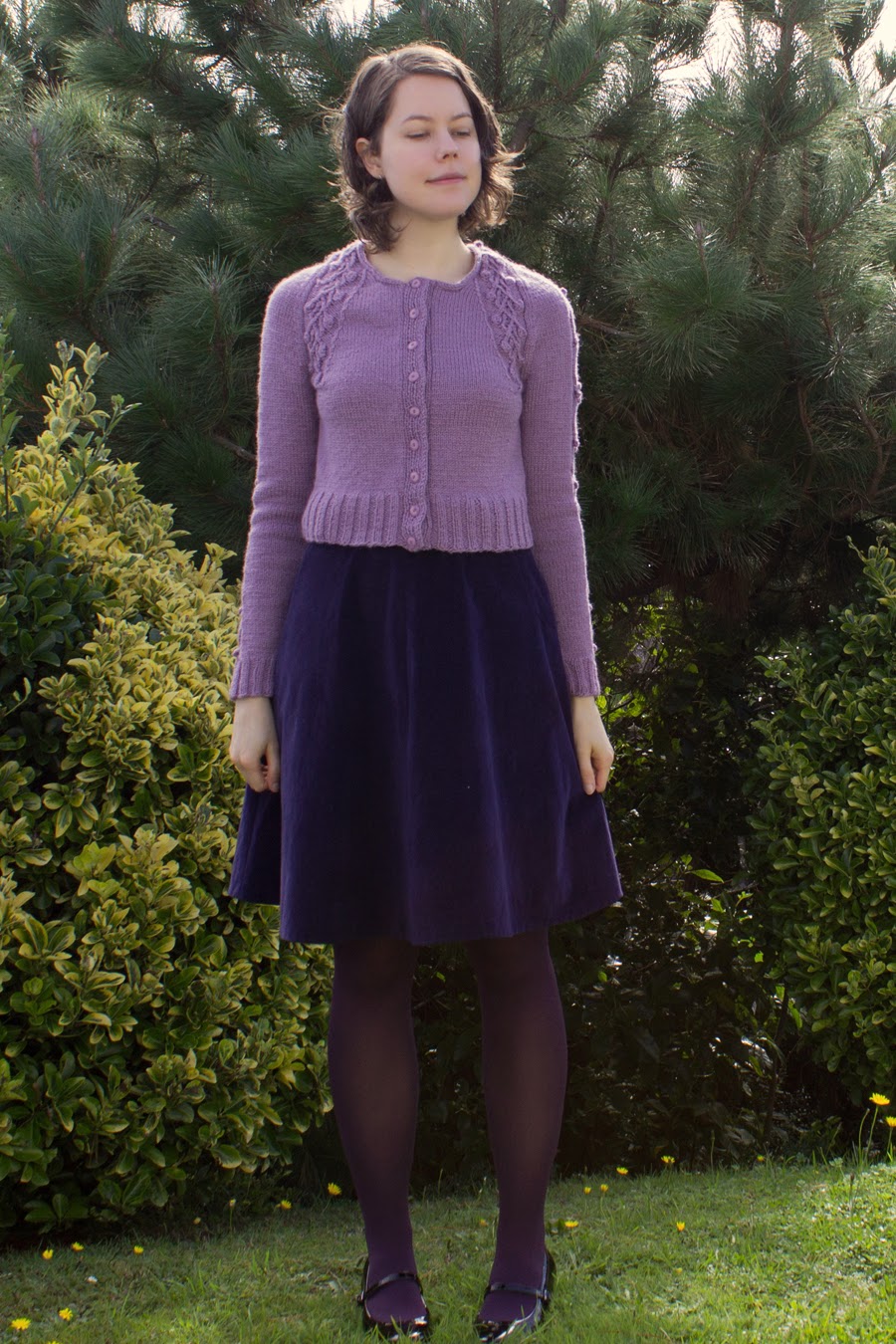 Pretty cardigan, right? Well it was a pain in the butt, I'll have you know.

This was not a particularly enjoyable knit at times! I actually put it down for a few months; yes, it was my first knitting UFO.
I made some mistakes, and those were:

- Going down needles sizes to get gauge, when the yarn was slightly too thick. That means I found the knitting to be slightly tight, which I felt slowed me down and made my tension a bit dodgy. (Then I made the same mistake again with another project, UGH!)
I did use an 8ply, just as the pattern called for, but this 8ply must be a bit closer to 10ply I think.

-Poor pattern choice, and modding without knowing what I was getting into!


Let me tell you the saga…
When I got this book, I fell in love with the lovely cable patterns in this cardigan and was determined to knit it, even though I discovered it didn't have a schematic (those are alarm bells you hear!).
I noted that it had no waist shaping and was designed for positive ease. Well, I'll add waist shaping, and make it negative ease! Easy right?

Well, not so easy, because my gauge was slightly too big, even after going down in needle size, and I couldn't just knit a smaller size as the smallest size still would have been too big.

The complications basically came in the form of the construction (bottom-up, seamed raglan sleeves, which I'd never done before) and lack of schematic. I basically drew my own schematic in the end. I have learned from this experience to keep NEAT notes though, as I could hardly figure out what I'd written when I revisited them!
I discovered as I studied the pattern that the sleeves had 15cm (5.9") of positive ease in them. Ummmm, that's NUTS, I thought. And it confirmed my suspicion that there was something fishy going on with the model. It is quite well disguised, but there is definitely a lot of bagginess in the sleeve.


Anyway, I went positively mad trying to figure out how I could fix the pattern with all the modifications I wanted to make. I ended up making a lot of mad calculations, and winging it.
I honestly think I'm lucky this turned out wearable!
Actually, I probably could have just learned to draft my own and stolen the charts from this pattern, and it would have been simpler.

I paired it with my corduroy Sewaholic Hollyburn (note to self: need more Hollyburns).


Pattern blather:
Since I'd decreased the circumference at the bust, I thought I'd decrease the raglans less steeply, so they were about about the same length as the pattern, but I would have enough stitches across the upper chest and shoulders.

For the sleeves (and I agonised a LOT over these), I eventually decided to decrease their circumference dramatically, as well as lengthen them to full length. However all those raglan decreases meant I would run out of stitches before I reached the neckline! So I decided to stop decreasing when I got down to the cable pattern (the last 15 stitches), and keep going straight until it was as long as I needed. I believe this is a saddle shoulder construction, again, something I've never tried before and was just making up as I went…

I pinned my pieces together at this point and decided how long to make the shoulder. Eyeballing all the way, baby! I also plotted some extra shaping to make the front and back shoulders fit in with the new sleeve shape.

Soooo yeah. It was a very think-y knit, and I caution anyone who would attempt it! In fact, later Joy pointed out to me that Roobeedoo had made it and had found the sleeves to be as dodgy as I had suspected! Sweet vindication! However her version is still very lovely and pushed me to keep on going.

Oh yeah, and to bang on about it a bit more, I changed the button bands and also the neckline just cos. Also I had to re-knit the bands a few times. AND they're seamed on too. UGH. I wanted to try something new as I'd always done picked-up-and-knit ribbing with horizontal rib, but I am not convinced on the merits of these seamed, vertical rib ones. So much work! But they give a nice look I suppose.

After all that, do I like it? Hmm, I guess so, but I don't love it. I think the seamed raglan sleeves (oh btw, SO MUCH SEAMING in this pattern. Boo!!), give it extra structure in the upper chest, and the cabling adds bulk too. So it feels almost like a jacket, which is weird. AND, my dodgy "Make up shaping as you go" approach didn't work perfectly, so there's a bit of extra room around the neckline which sticks out away from the body (probably the i-cord I added instead of ribbing makes it worse, as it has a little bulk of its own!). 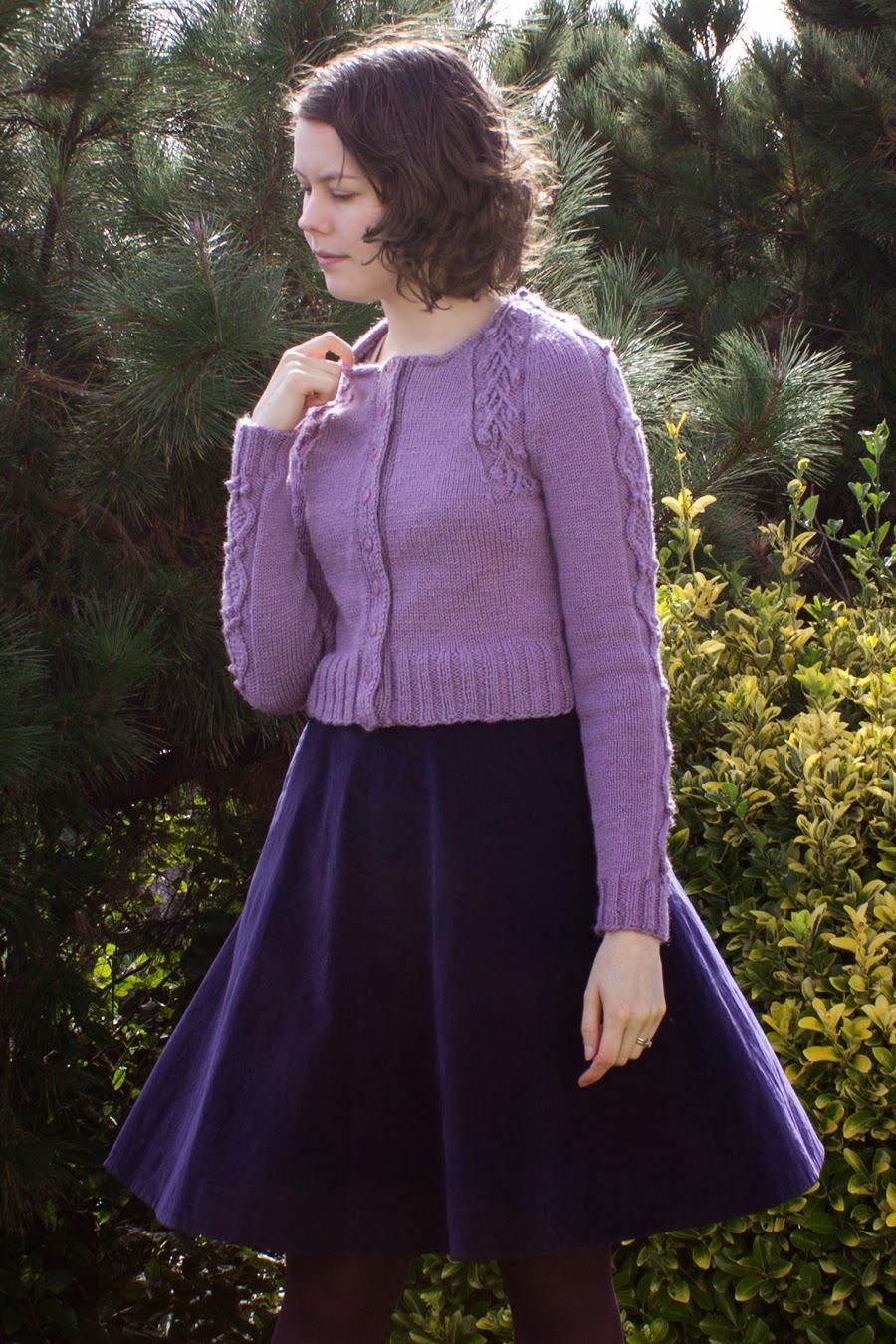 So to sum up my irks with this pattern:
-There is no schematic- what shape are the pattern pieces please??

-There aren't enough photos (only 2), and in one of them the models' hair covers up the details! I have to wonder if the details are covered up because they wanted to hide the flaws in the pattern….

-There is no indication of how much ease the models are wearing, and though from the size chart it is indicated that the design is meant to have 1" positive ease, one of the models is clearly wearing a lot of negative ease. This is deceptive for beginners, who might assume theirs will look like the model's.

-There are no charts for the complex cables, so I made them myself using this chart generator, and then printed them out.

Well, I guess I learned more about knitting patterns and modding and such, but honestly, I probably could have knitted two cardigans for the time it took to figure this beast out! Well, that's life eh? I'm such a sucker for a challenge...


Anyway, when I was taking photos, I found that I could potentially fix the gross neckline by creating faux lapel thingies. I think it's a much cuter shape somehow, and stops the neckline sticking away from the body. I am considering sewing them down. 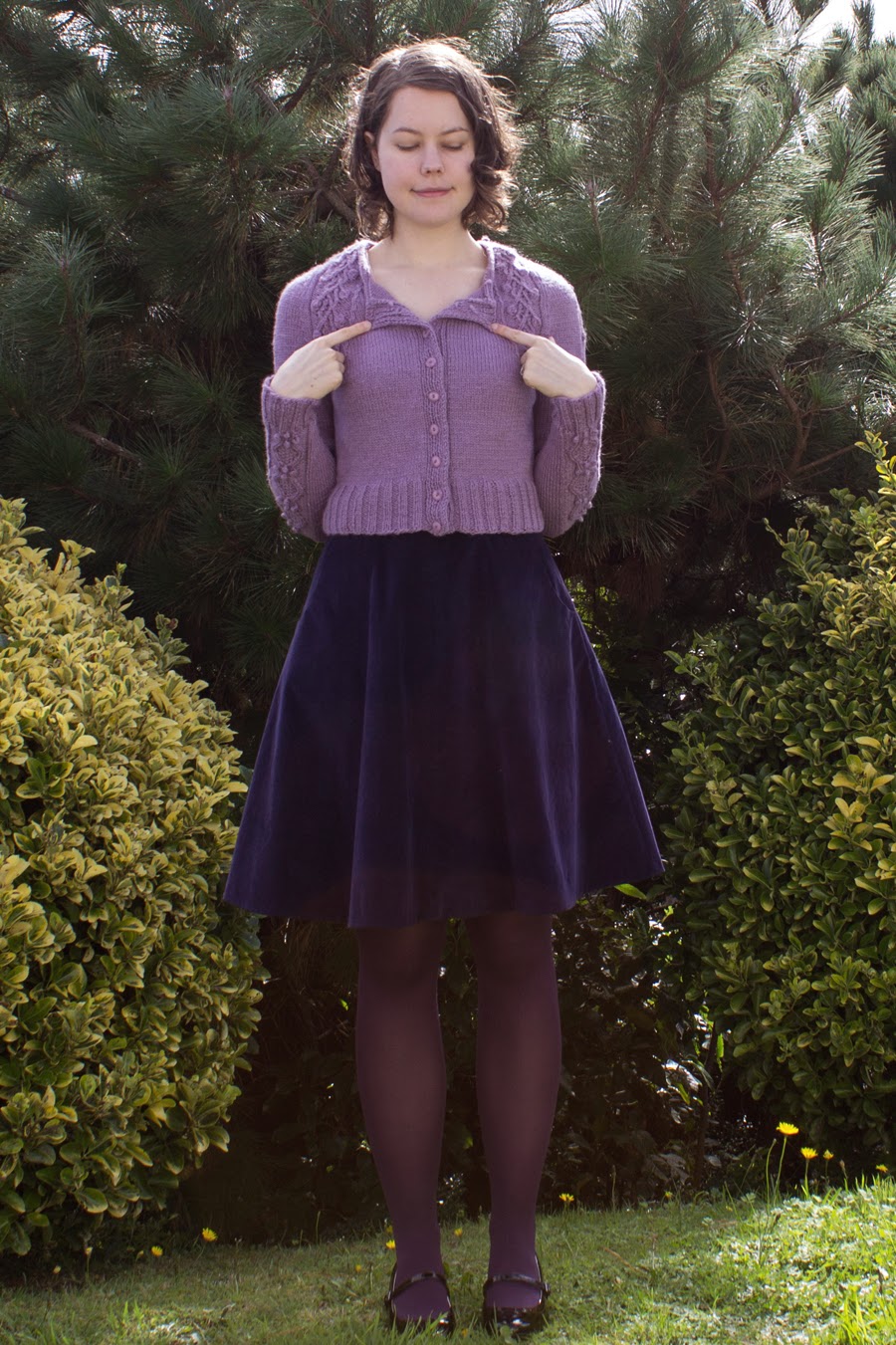 Of course, if I did that, I couldn't wear it in the other cute way which fixes the neckline by letting it droop down half unbuttoned: 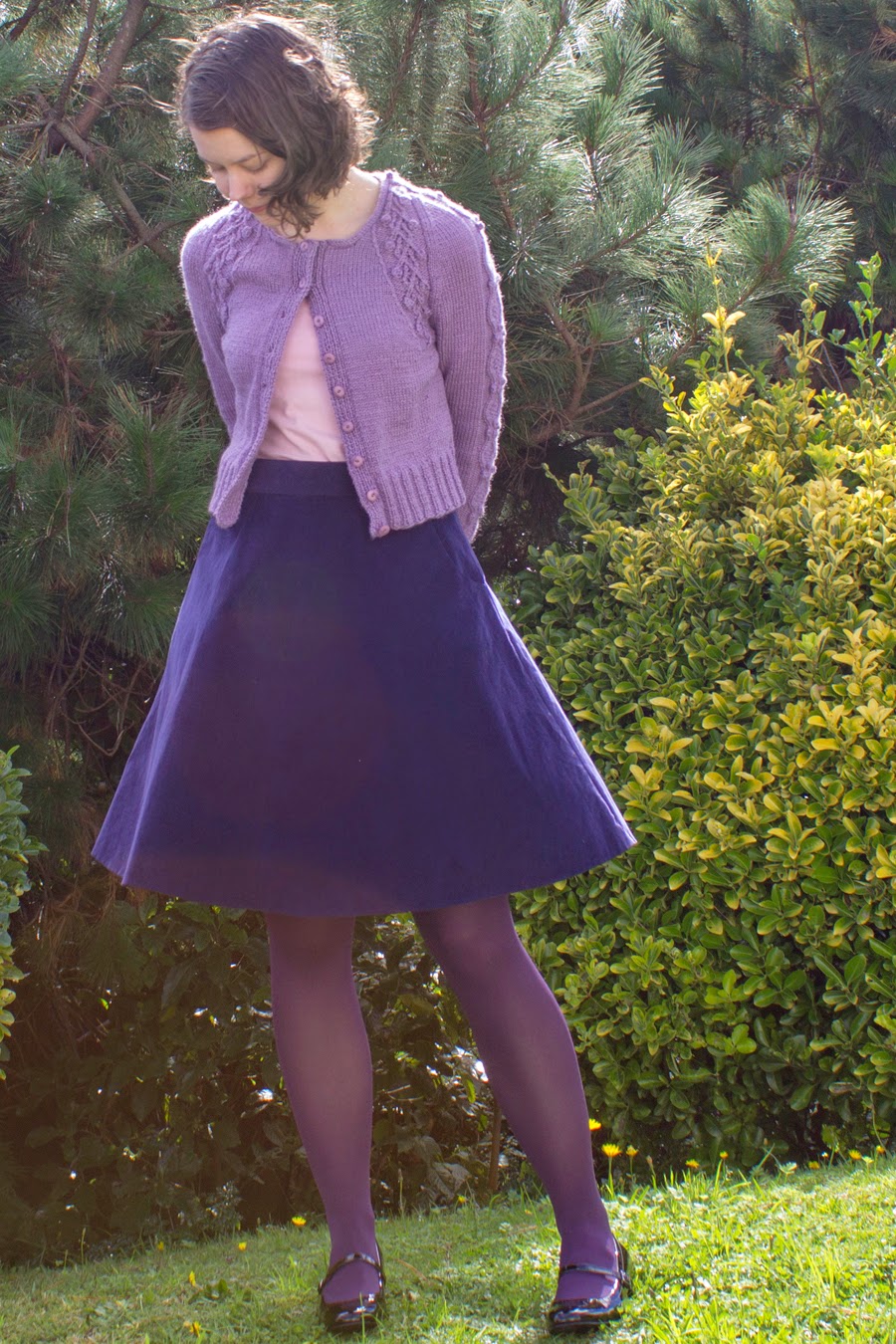 But maybe, just maybe there's room in this world for a hybrid of the two??:

So has anyone else had a pattern they totally got in over their head with? And shall I make little lapel thingies?! Gah though, I'm so relieved this project is over! :)
Posted by Johanna at 12:55