Wow, I can't believe I'm finally blogging this! This was one of those projects that got put aside a lot...This knit languished for weeks waiting for blocking, seaming, and buttons. I have to agree with the majority, it's the less enjoyable part of knitting.

Oh and apologies in advance for the terrible photos. I get bad photos when I take them myself cos I can't work a camera (and I'm too lazy to learn right now!)! :P
Anyway, this is the cabley-est thing I've made so far, which was quite a lot of work! It's the Blackberry Cardigan. It has lovely cables and also textured details on the back and arms. 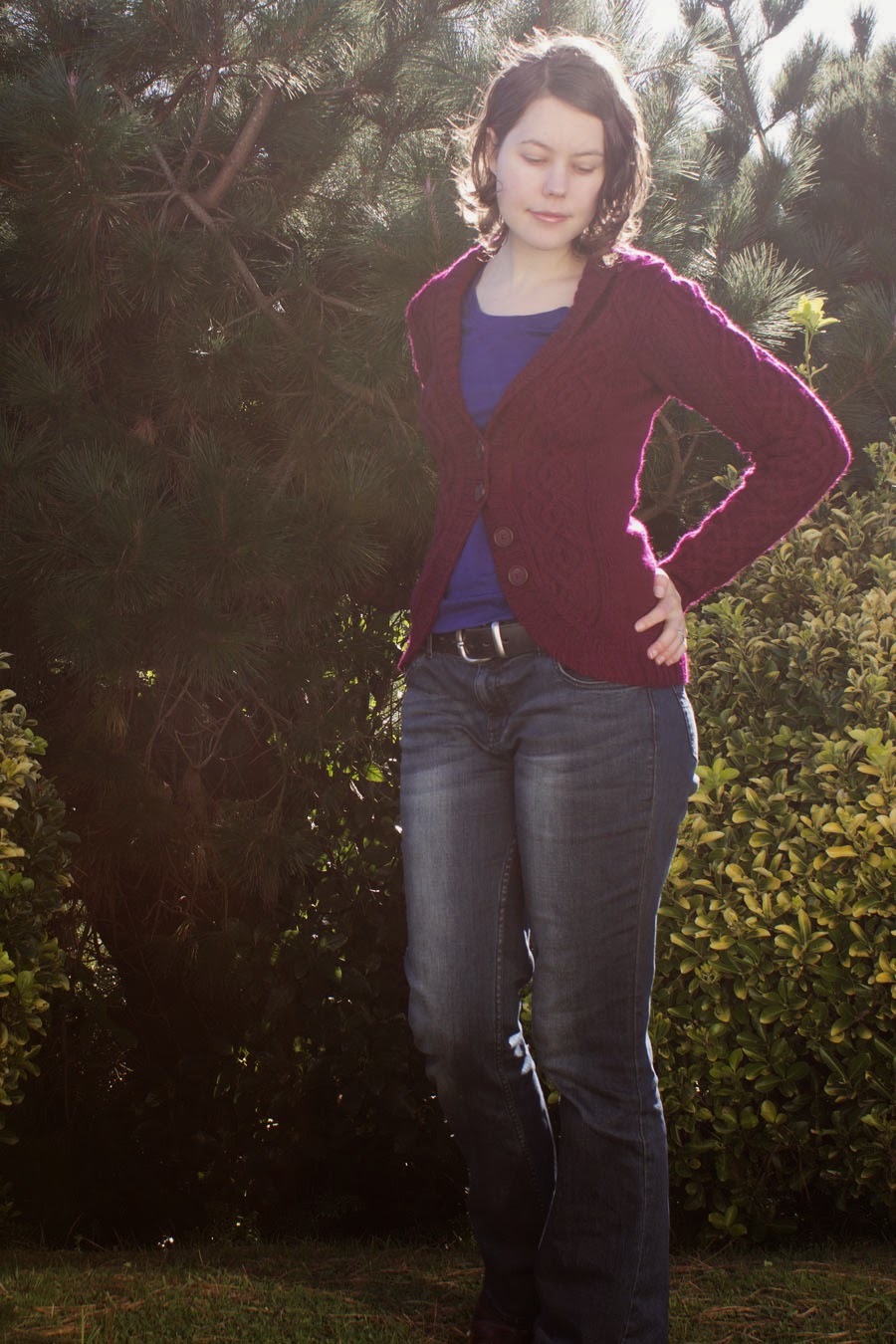 I think it would look really great over a dress but I didn't really have anything suitable (better make something!). It works well casually too, but I think it would be nice with a necklace added! I am very slack when it comes to accessories.

Of course I got up to some technical malarkey.
For one, I changed the body to be knit seamlessly.  Come on, who has time for all that seaming faff? All you need to do is figure out what order the pieces are put together, and remove the selvage stitches. Then knit for your life! I did seam the sleeves though as I didn't fancy knitting cables in a small circumference in the round.  I also added extra shaping for my pear shape, starting a size up in the hips. I moved the shaping too, from the side seams, so it could be next to the cabled motif. That way it looks more like a seamless part of the design, rather than sitting in the middle of the stocking stitch panels!

Other Ravelers had noted what a pain the blackberry bobble stitch was to knit, and upon swatching, I agreed. So I changed it to double moss stitch. I swatched that too and it was a different gauge, so I had to mod the stitch count for all those sections too!

The collar is picked up and knit in one piece with the ribbing that goes allllll the way around the body. Then it's shaped with short rows to make it longer around the neck.
I diligently hid my short row wraps on the wrong side of the fabric. ....except when I finished I realised that of course the collar folds over, making that wrong side the right side!! Ugh, hello again ugly short row wraps! Some dodgy hand-stitching and a prayer that it wouldn't look too noticeable followed.
I also tacked down the collar with invisible hand-stitching at the front so it doesn't flip up.
You can see it flipped up at the back in this picture, so I'll be tacking that down too! 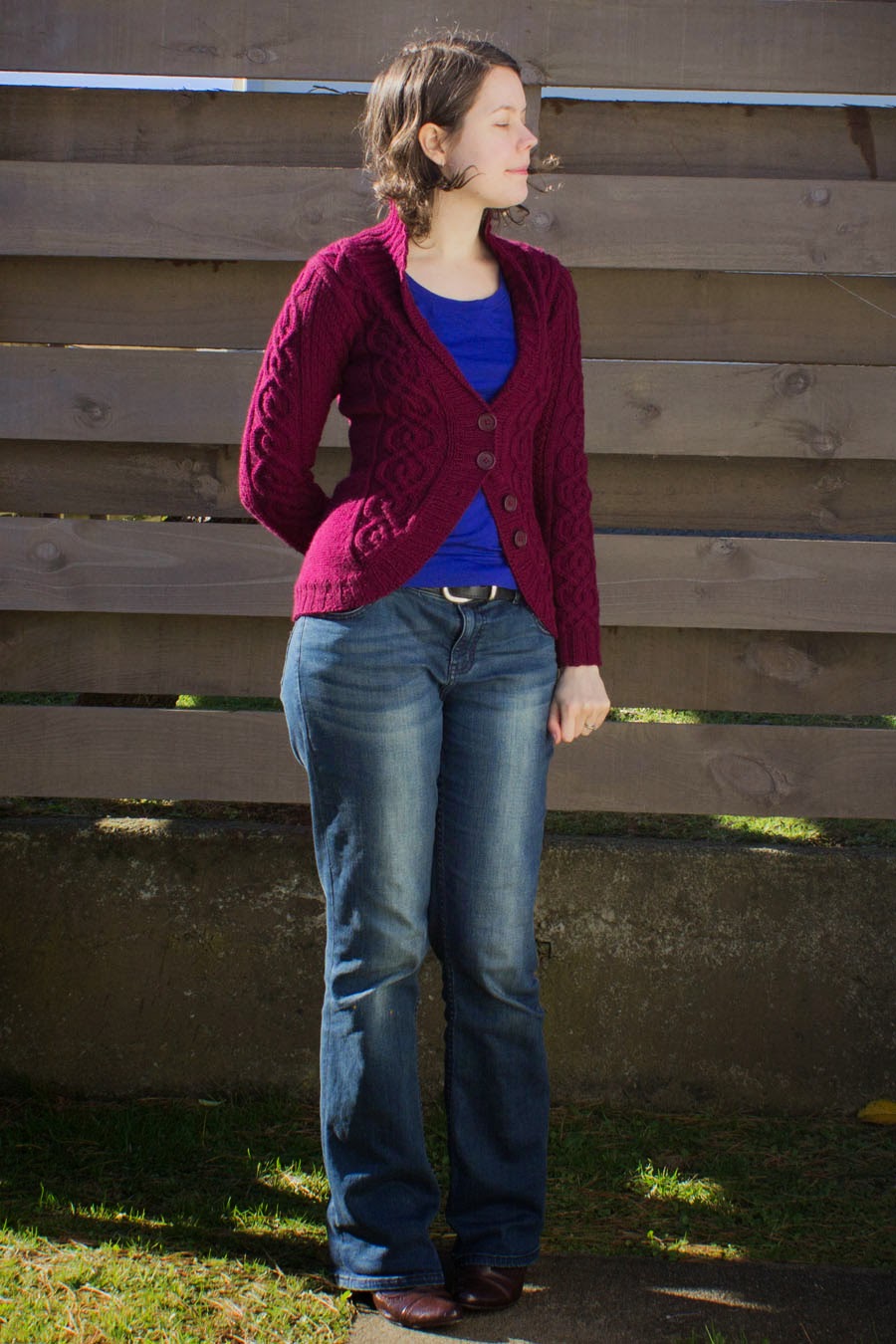 Also, look how the pattern's sample garment's collar rolls away from the body. I think it's kinda eww. 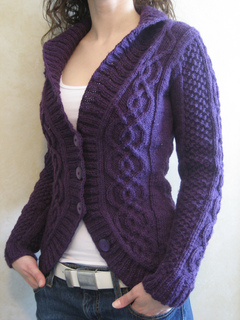 This pattern is designed for 0 to a little positive ease but I went for -3", I know, what a rebel! I was worried that would be too small, but none of my other negative ease garments have felt too small. This is the most negative ease I have put into a cardigan yet. The buttons may pull a skosh but I feel I got away with it. It doesn't bother me! I think having less buttons also puts a little more strain on them, but I really only want to button the top two. I should have gotten photos with the rest done up though, for science.

Details, details.  Just call me the mod-aholic.I enjoy putting that extra thought into my knits.

Here's a sleeve tip from me to you: When knitting a long piece to be seamed, put markers in at the start and end of the row, every few inches (in my case I used tied loops of dental floss). Then when you're seaming it up after blocking, you can match them up and it makes your seam precise and easy to match up! 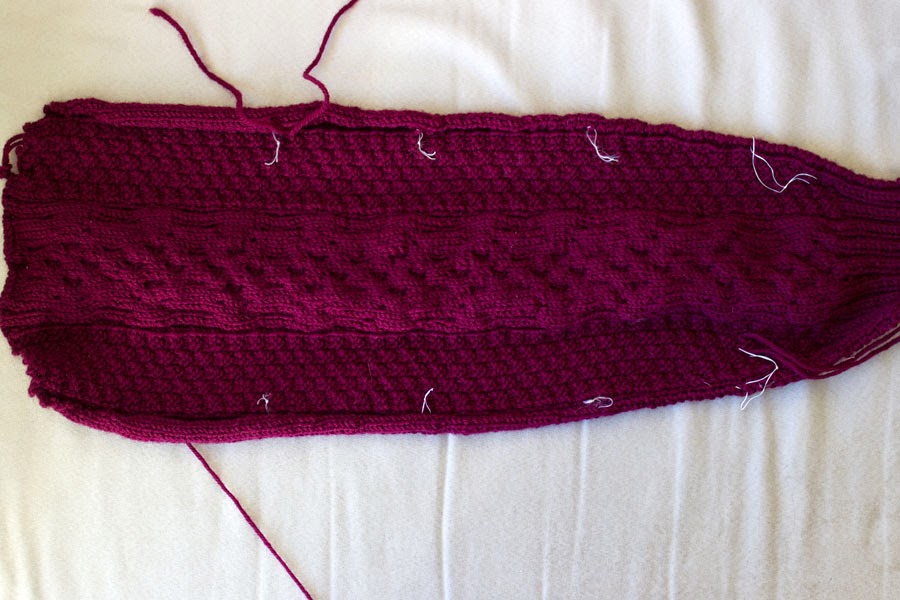 Oh! And I found the sleeve caps really weirdly drafted: look how short they are! They're designed to be 3" high, whilst others knits I've made with set-in sleeves were around 5.5" high.  So squat! They went in fine though. I think perhaps they they pull the shoulder seams towards my arm a bit, but really, what do I know about sleeves? They're complicated beasties they are. And the stretch of the knit makes it work. If you have any insights on this, let me in on them! :)

When I went to block it, the water turned pink! Eep! I drained the water and re-soaked it 2 more times until the water looked clear. Then I did a final soak with some vinegar chucked in. Thanks to Sonya from Ginger Makes for giving me advice on Twitter!  Vinegar supposedly helps to set the colour. Fingers crossed! I might wear an old white shirt under it as an experiment before wearing under anything too precious...

Are you ready for more dodgy photos?? :P

I recommend this pattern overall, but I wrote copious notes on my Ravelry as usual, as there were some points that could have been improved. I'm pretty happy with this knit, and I hope I get lots of wear out of it :)
Posted by Johanna at 09:52