This is the Washington Square Cardigan from the book Metropolitan Knits. 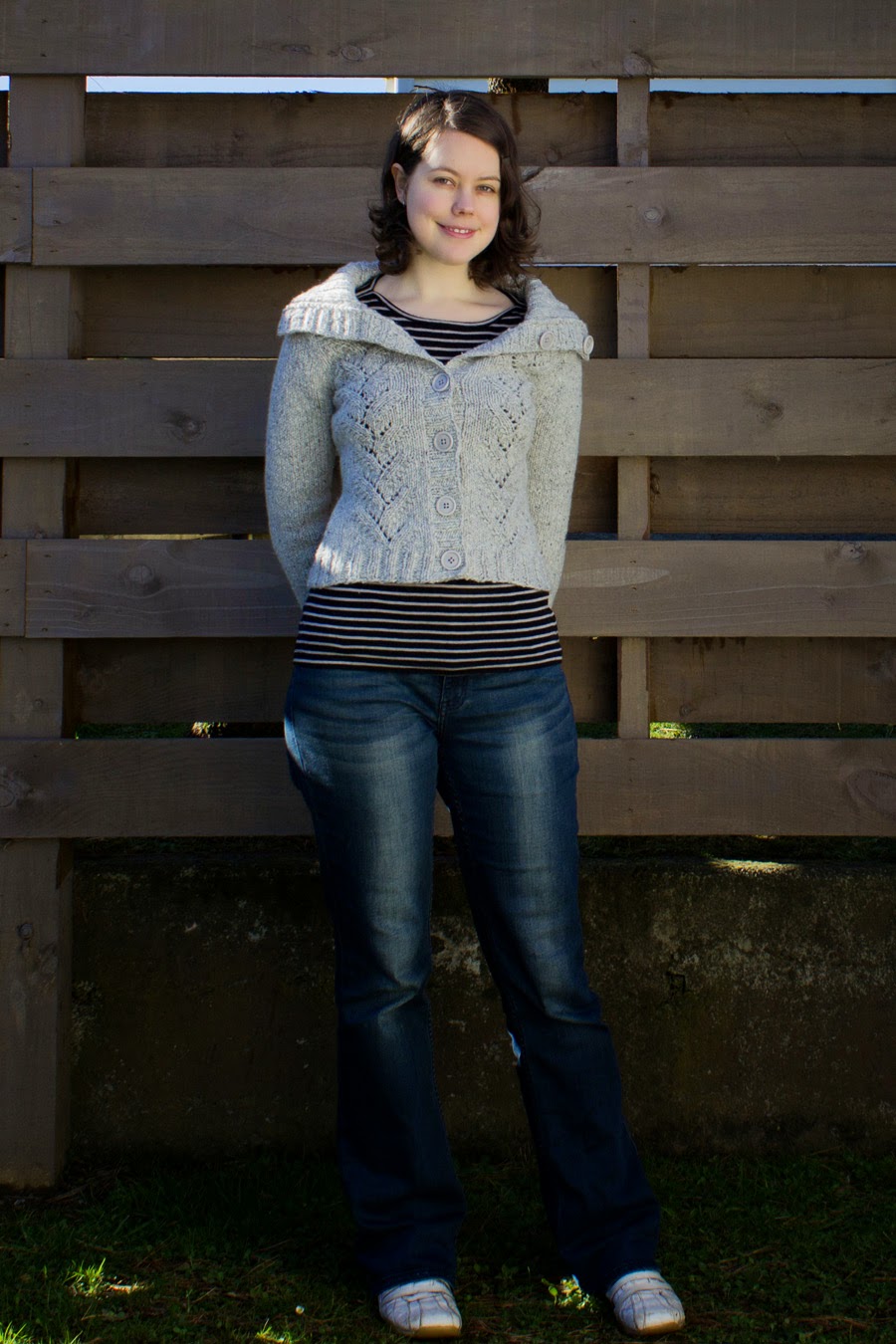 There are quite a few attractive knits in this book, if you ask me! I like the way the book one is styled with those snazzy contrasting buttons. But being Miss Matchy-Matchy, I went for same-colour buttons yet again. I can't help it! I didn't reinforce the button band with ribbon so it's not perfectly free of waviness, but it doesn't worry me. 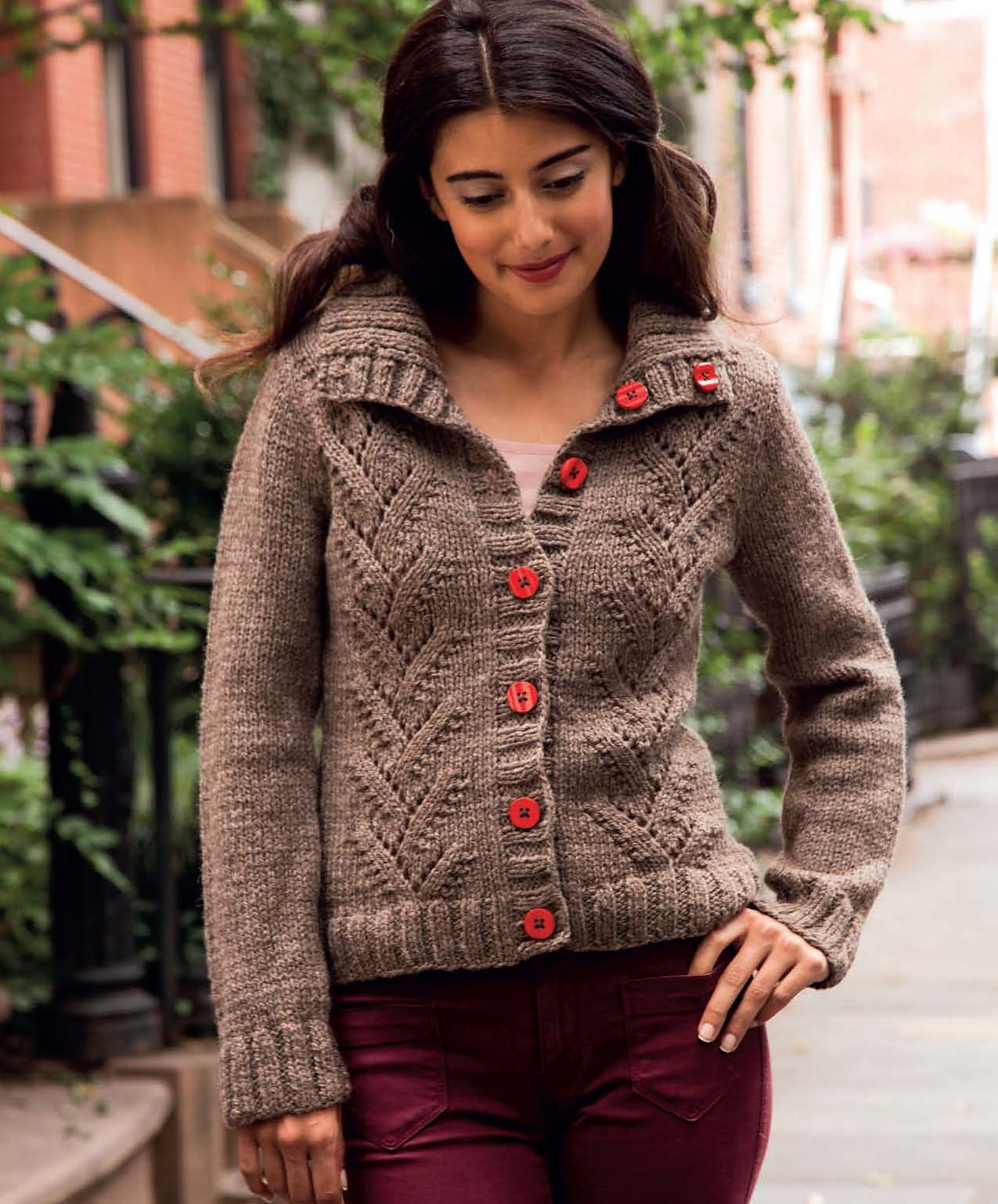 I wanted a rustic yarn for this. I ordered it online, and I definitely got rustic; it smelled like sheep! The yarn also had an ever so slightly greasy feel to it which must be lanolin. Even after washing and blocking, it smells slightly like sheep. Hopefully that goes away in future washes!

I noted the cardigan was designed for a few inches of positive ease, but as usual, I wanted negative ease (I aimed for 1"). So the smallest size was several inches too large. Getting a bit crafty, I decided to knit with 10ply and a smaller needle, instead of 12ply, for a smaller gauge. That way, I didn't have to mod the stitch counts so drastically!
I did fudge the sleeve caps a little. Sleeve cap shaping is a bit more wily than just changing the circumference on the body, and all I did was add a few extra rows to make sure they were long enough. It maaaainly worked out, but they were slightly smaller than the armscye I think, when it came to seaming. Meh, I just fudged it by easing the armhole in and you can't tell. Oops! 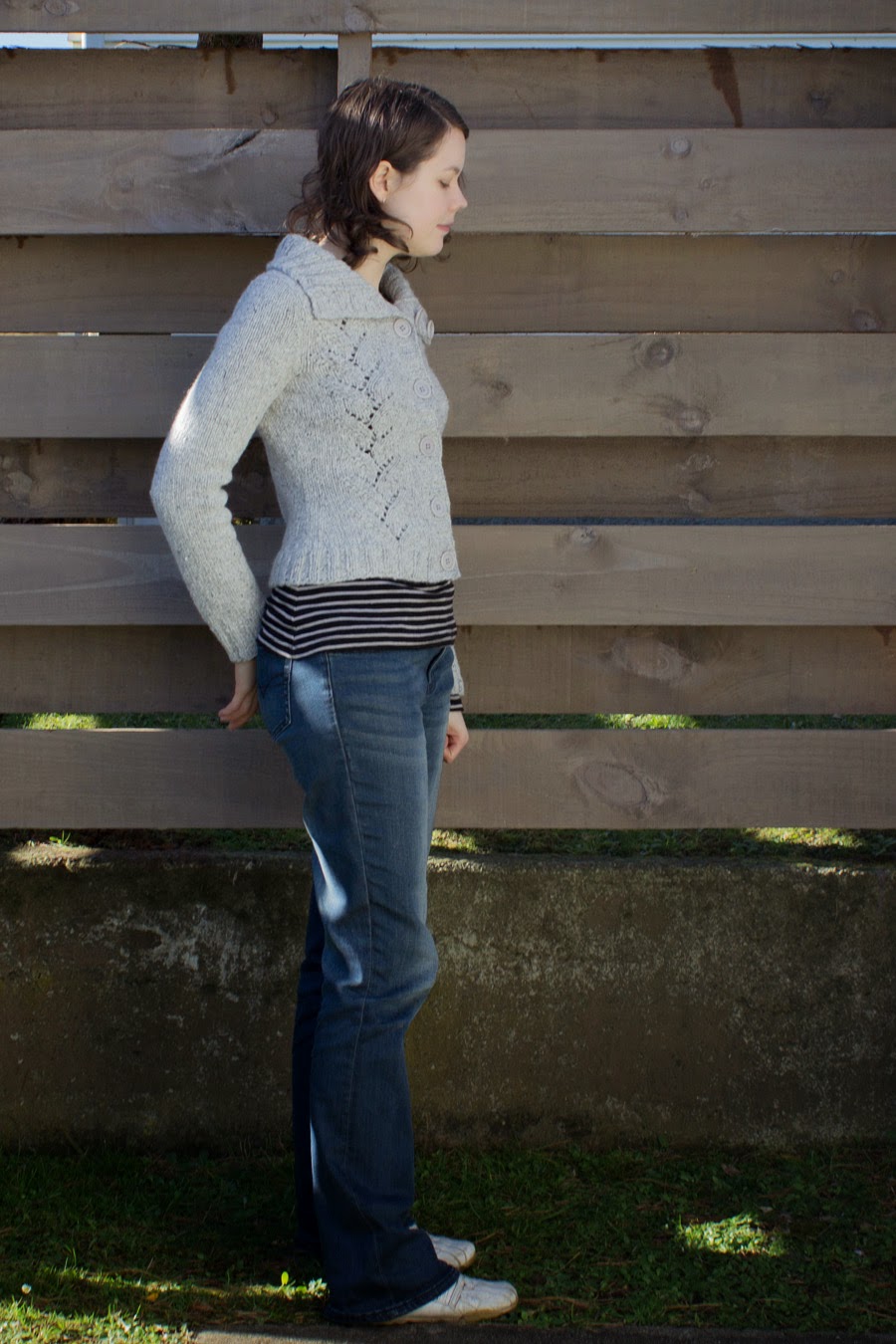 Because of using a different gauge, I didn't know exactly how much wool I'd need, so I played yardage-chicken. Not my favorite game! The wool was quite expensive so I was a bit stingy and didn't buy any extra balls for insurance.
But I did shorten it three inches and thought that would give me some breathing room. And I had a whole ball left over at the end! Phew! (Though having leftovers is also a peeve, lol!) I quite like it a bit shortened. I haven't worn it over dresses but I hope it'll work well!

Ooh this yarn, though. Rowan Tweed Aran, is quite different to what I've knitted with before! It's not really plied, it's more felted-seeming (description from someone like me who doesn't know all that much about yarn!). So it breaks apart quite easily when you pull it, which I've never had before! It also does NOT like being spit-spliced (my all-time favourite yarn-joining method!). I theorise this may be because it's already all felt-y. Totally a term... yeah. Each time I joined in yarn, it was so hard to get it to splice together! I kinda wish I'd done it a different way because I worry my joins aren't as strong as they need to be. Although ALL the yarn is kinda break-y so it is probably fine. Or the whole thing will fall apart anyway! Hah! I figure the knitted structure must give it enough strength.

So, knitting with it was fine, except for the joining moments. But seaming it up was terrible, because the yarn was so easy to break. What I ended up doing was getting some grey acrylic yarn I had (used for this amigurumi bunny I crocheted), and using that for seaming. That worked MUCH better. I did use a sewn bind-off for the collar, as the pattern instructed. Now, that was also a break-y mess, but one I couldn't avoid (because it is visible, obviously!). I had to spit splice fresh yarn in the middle of the bind-off because pulling it through the stitches with the needle repeatedly was more than it could handle! Ughhh. Glad that's over!

As usual, I added in extra shaping for my pear-shaped figure. I accomplish this by starting with more stitches at the hem, and doing closer-spaced decreases until the waist. Well, that makes it sound simple, but I do math it all out.

I also knit the body and sleeves seamlessly, rather than seamed. Seriously, who are the weirdo seaming-fans that write these patterns?

My favourite feature is the fold-over collar.  I love features that draw attention to the shoulders. I wonder if it's to do with balancing the proportions of my large hips with my small shoulders?  Or maybe I just like it. Haha.
One stupid thing I did was something I'd started doing out of habit but didn't think through. I'd read a while back that for edges that will be seamed, or where stitches will be picked up, you should do garter stitch for the selvage stitch, i.e knit every row.
It makes it easy to see where the edge of the selvage is. But it looks ugly and lumpy. No worries, it's hidden on the inside of the garment!
Except where it's not. Like when the collar folds over. Oops!

After a period of regret and annoyance, I had to conclude it's not a detail anyone will really notice. I'll know for next time though! I don't think I'll bother with the garter stitch selvage anymore. I can see where the selvage is by myself so I don't need that additional help.
I forgot to get a shot of this detail. Sorry!

It was a pretty straight forward knit (except for the usual mods I did). I love cute cardigans and dressier knits, but there's something soo nice about making a casual-style garment. My husband was particularly impressed with it because it "looks like it's from a shop". Hah! (In other words, it's not some WEIRD vintage-looking style.)

My Ravelry notes are here.
I think it'll get plenty of wear. 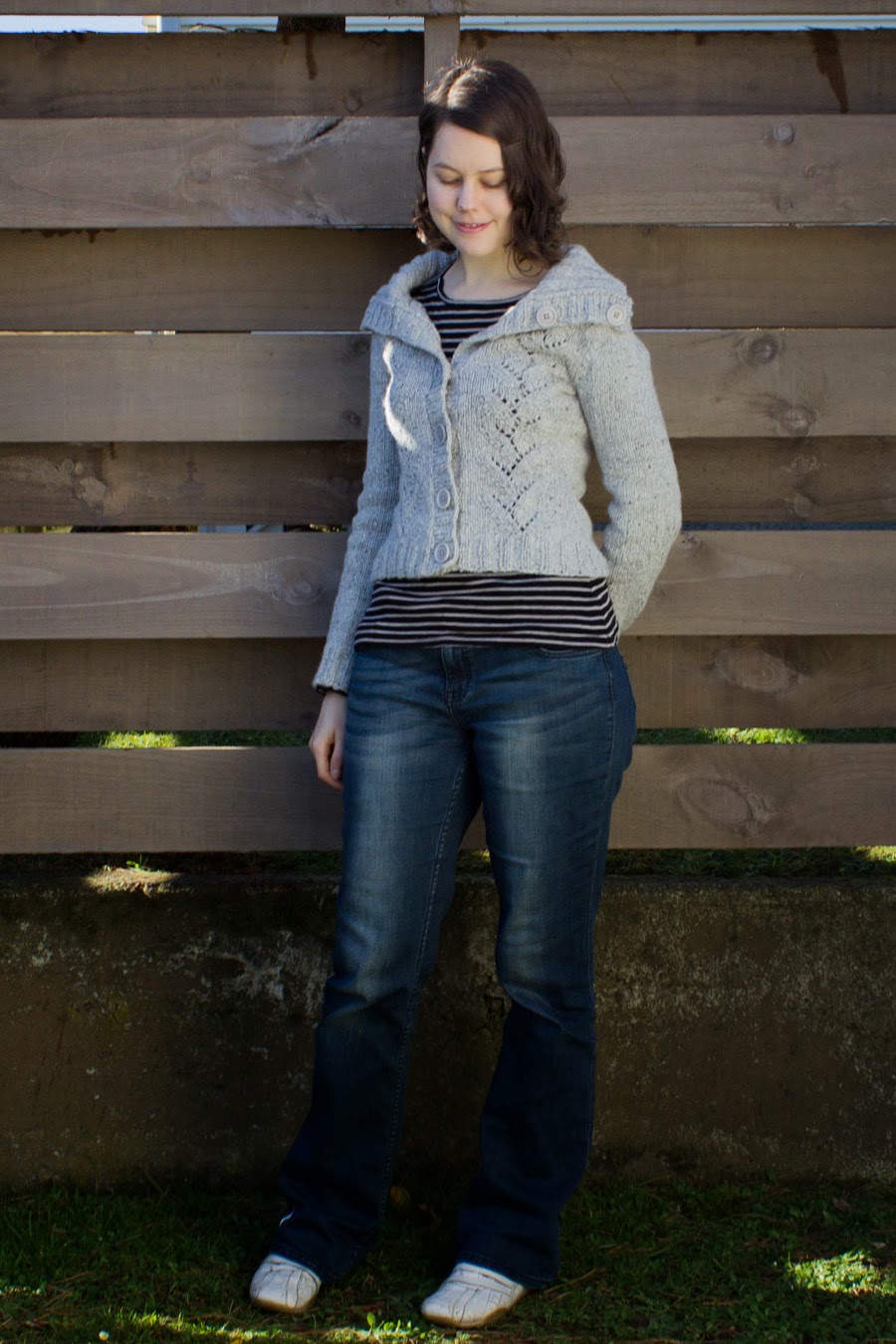