Yep, but this time, the undies are for someone else!
These are the Comox Trunks from Thread Theory, the indie pattern company that does great menswear patterns!
Trying out a new undies pattern.... you could say I've added to my... PANTSfolio?? (No apologies for that terrible pun. You loved it.)

I couldn't resist this fabric.
Space Invaders!! They're one of my husband's favourites as it was one of the first games he played, and he's hugely into games. Plus he loves those wily aliens...
I had to sneakily make myself a pair too though. Matchy! This is just the same Ohhh Lulu undies pattern I've used recently. 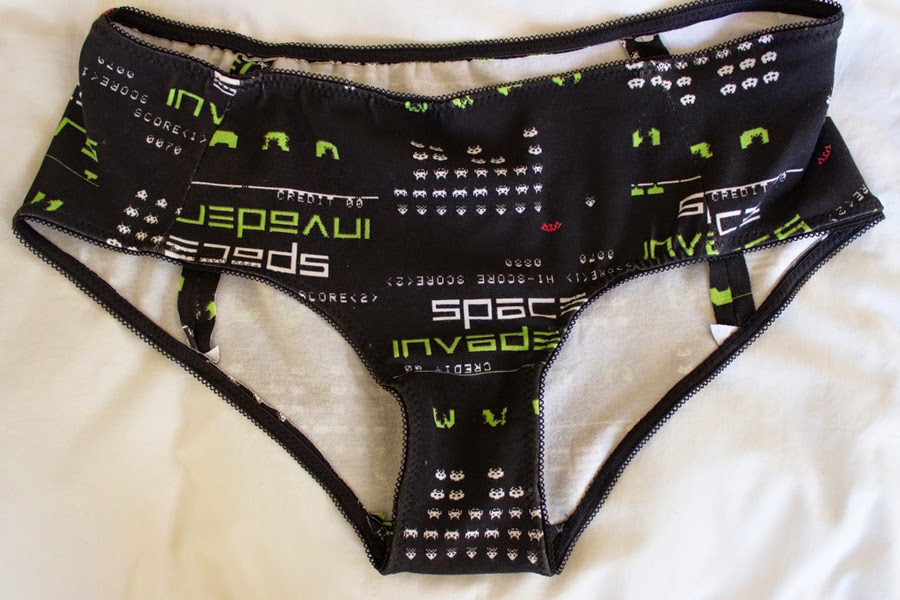 I bought the fabric from local knit fabric source, Levana. It was some limited time thing; they don't usually stock prints. Honestly, I don't think it's the best quality fabric around, so we'll see how it lasts.

I did make one mistake (that I didn't bother to fix, naughty). I only realised once I'd finished that I put the opening in the wrong side. Oops!
The other thing I could improve was sewing on the elastic. It's a bit wonky, but you know. Black on black. And the fact that they're UNDERwear. Heh. 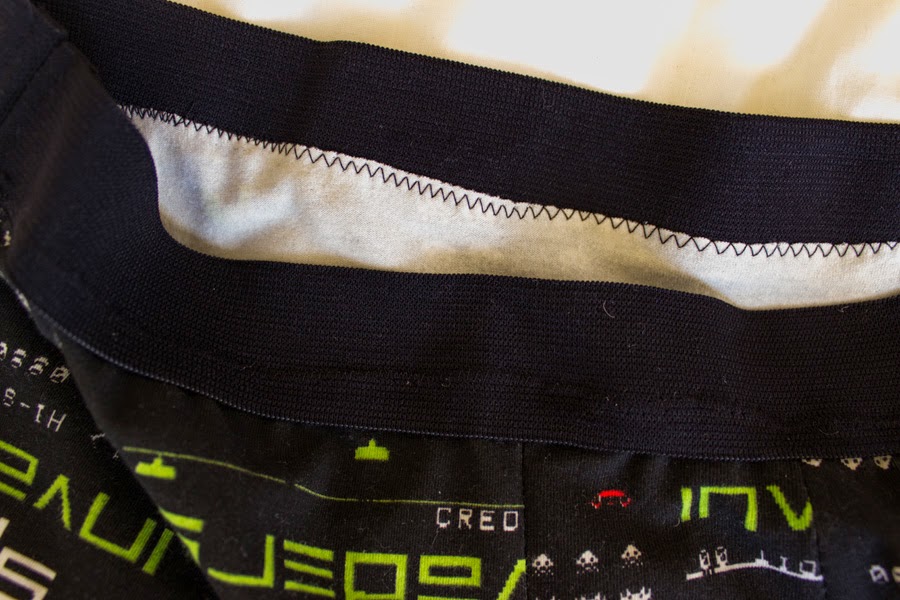 These took a LOT more time than my girl-undies took. They are more complicated, with more pieces. Plus I puzzled over the instructions a few times, though I got there in the end.
And then afterwards, I realised there was a sew-along on their blog. That would have helped I suppose! Now I don't know if I'm alone in this, but sometimes I feel sew-alongs bog me down with excessive details when I just want to get on with it! So I'm not sure if I'm a fan of them or not, really. In this instance though, it probably would have helped.

My mister is very trepidatious about me making him things as he doesn't want to look "home-made-y". Fair enough. I think as I've sewn more he's a little less scared these days, haha! These did pass the test (and he's very blunt at all times so I know he's telling the truth!). He did however said they could have been tighter in the waist.
Because his hips are on a smaller size on Thread Theory's chart than his waist, I made them in the waist size (better to size up for safety right?). But these sit more on the hip than the waist, so it really does make more sense to pick the size off the hip chart.
If I make them again I'll size down.
Would I make them again? Well, they are bit of work. And I'm not sure how unselfish I'll be feeling! If I could get a lot faster it would be a decent saving on undies (men's undies are expensive!!), but I don't sew just to save money, I sew for satisfaction!
It did give a pretty good result, which is quite satisfying. The fun fabric definitely helps too!

Of course your big question is... did I get him to model them?? Sorry to disappoint, but he wasn't too keen.  But if you feel you're missing out, Thread Theory's models have you covered. Haha!
Posted by Johanna at 08:25