A while back, I bought some velvet. I FINALLY got around to working with it!

I read up on velvet from a few sources and they all made it sound so hard. But it wasn't. So there. 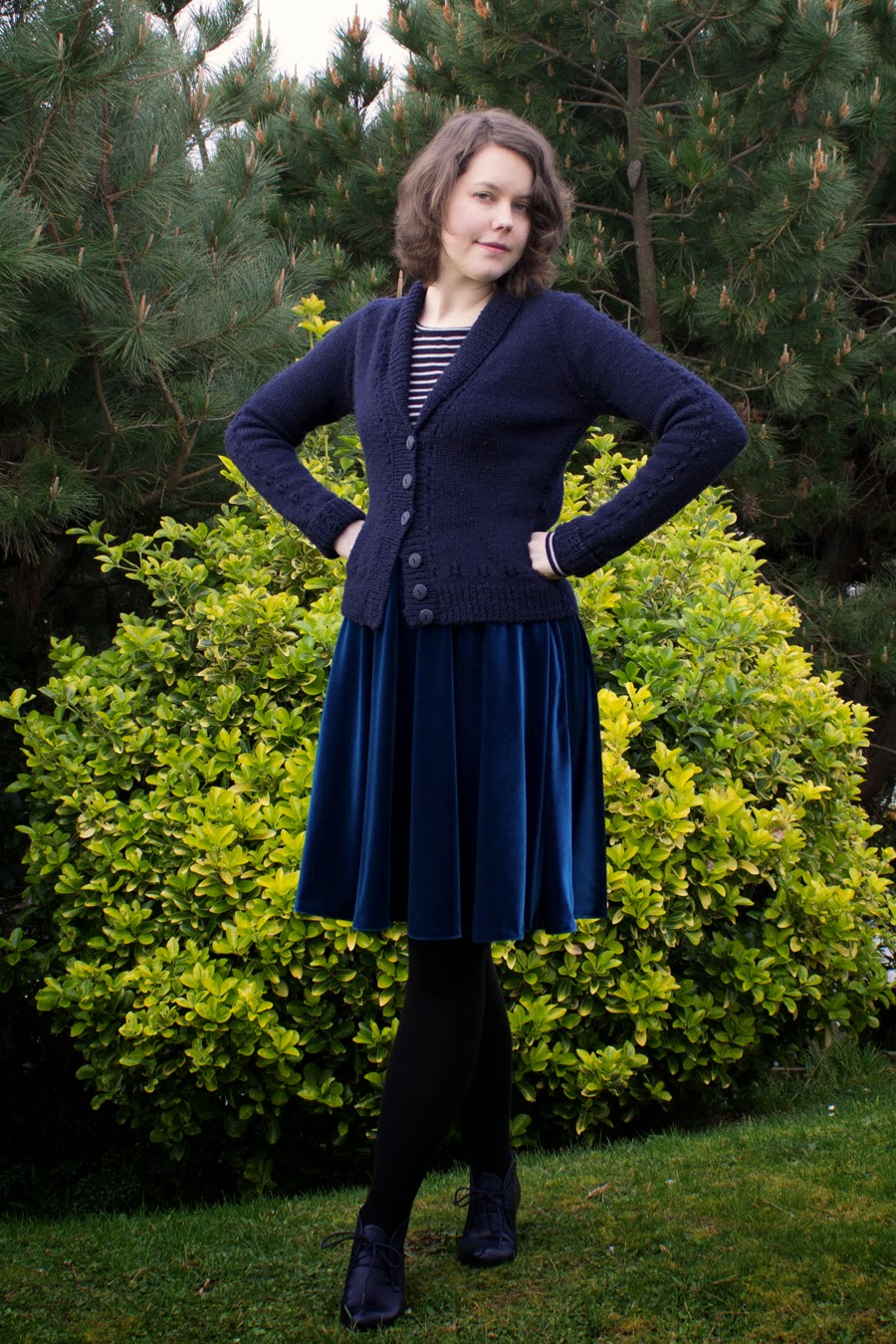 I wanted a fancy velvet pressing board, as I was very concerned about accidentally crushing the nap with pressing, and I'd read about using a special velvet pressing board. Well, Threads saved me with this genius tip! I already had a dowel lying around (weird), and I bought some adhesive velcro from Made on Marion. The adhesive didn't stick well enough so I'll have to top it up with some super glue! Anyway, I used it to press my seams on. However, out of curiosity about the concept of crushing the nap (that all the expert tips go on about), I steamed and pressed the HECK out of a scrap of velvet.
The result?

I couldn't tell the difference at all!

Sooo, either:
a) I bought some remarkably hardy velvet

c) The expert tips are from paranoid people

d) some combination of the above. lol :P

Because of my fear of pressing, I chose not to fusibly interface the waistband (though I reckon I could have!). I only interfaced the cotton facing I used. But I wonder if both sides of the waistband need interfacing and I fear it's going to be a bit of a saggy waistband. Especially with how heavy the skirt is!


Everyone also said velvet is really hard to sew, and that you'll definitely need a walking foot and hand-basting etc. I didn't do those things and it worked fine, so I guess I bought magical velvet? However, it IS a very simple garment. I guess the tricky factors come into play a lot more on more complicated garments.

I generally obsessed about the cut of this skirt forever. So much to consider! With velvet, the nap runs vertically, so unless I cut it as a gathered or pleated rectangle, the nap would run differently on the side seams. I wasn't sure how that would look (turns out it really doesn't matter much, the folds and movement obscure details like that anyway!). And I didn't want to gather it as I was worried about adding bulk around the waist (though on images of wee models it looks fine!).


(By the way, notice how short these all are? That of course is one of the reasons I turned to sewing. Everything on the racks is so flipping short!) Also, notice how they're all burgundy? It must have been a big trend for velvet skirts.

Regardless, I wanted some volume in the skirt because the play of light on the texture of velvet is so delicious, I wanted yummy folds to bring out the contrast! I'm really obsessed with texture... My forays into corduroy may have been a gateway drug!

I was definitely getting obsessive (my achilles heel!). In the end I picked a 3/4 circle skirt because
1) I've made a full circle before and it is loads of volume. I loved the idea of fullness but maybe a bit toned down.
2) I've always been curious to experiment with different fractions of circles. Just to compare!
3) My Hollyburn (these photos show its drape better) is almost a half circle and I wanted more folds than that (although this velvet is so drapey it falls completely differently to my corduroy, so it's better compared to Lauren's lovely drapey Hollyburn.)

Overthinking! It's my thing.

When cutting, I made sure to line up the pattern pieces facing the same way so the nap fell in the same direction on the front and the back. Speaking of nap, did you know that whether the nap runs up or down affects the way the velvet looks? With the nap running upwards it looks richer and less reflective. But sadly, you can't stroke down your skirt because the nap is rough that way :(
I chose the nap going up because I'm not a big fan of shininess! Maybe it's for the best, I'd probably rub the poor velvet raw from constantly petting my skirt otherwise! Haha. It's still a bit shiny though.
Here, I took photos!


I put a lapped zip in the side seam, but I used fusible stay tape on the seam allowance first as a precaution (this fabric has stretch in it!). Hand-picking it gave me more control; I'm not sure my machine would have been kind. And hand-picked just looks sooo good!
...Except in this super crummy pic that makes the fabric look super dusty... but check out the invisible stitches! 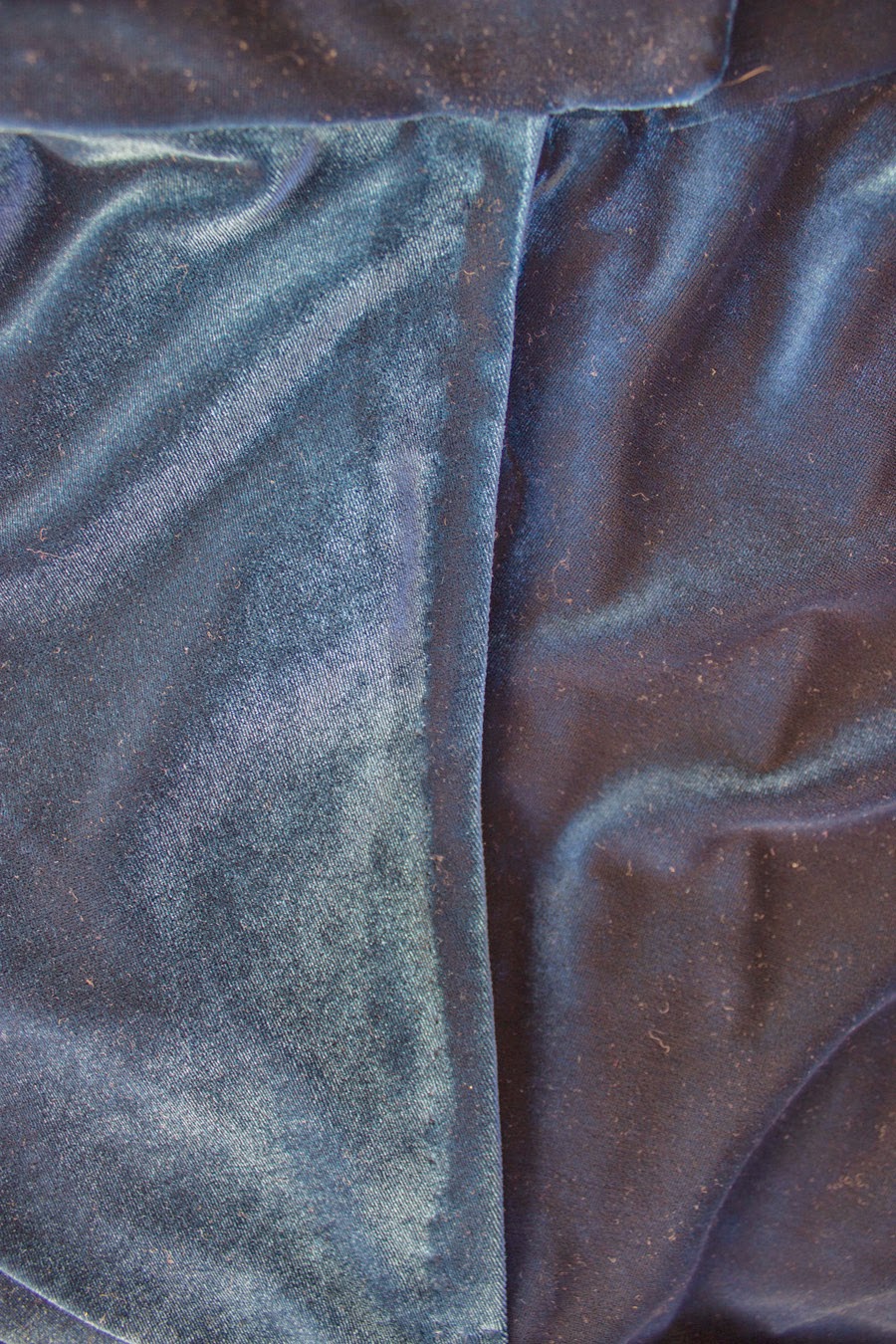 I hand-hemmed the skirt after finishing it with bias tape. Took forever.... and I also made some puckers in one place because I pulled the thread too taut! Dangit!I have to decide if I can be bothered fixing it. 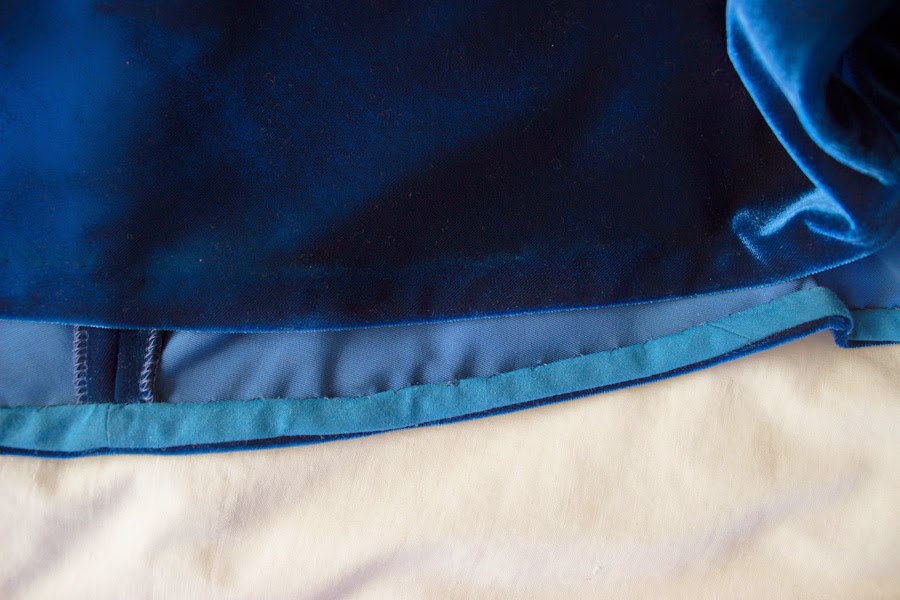 Actually, speaking of hems... I'm wondering if I should lop some off (though not to the level of the models!).

Yes, I am on the fence about this skirt. I think maybe I should have shortened it, so it's less overwhelming. I also wonder if I look like a wannabe elf or medieval maiden, not my preferred style. Haha!
The third thing is that I don't know what to wear with it.


I wasn't even sure what I was going to wear with this- velvet is pretty intense, so I didn't pair it with anything that would be overwhelming. I love the romantic styling I've seen with lace and soft fluffy knits, but I don't have any of those things. (Yet!!)

This cardigan has gotten a LOT of wear since I made it, but it's definitely not my favourite.
All together now: "More negative ease please!!"
It's casual and slouchy and I want more fitted and put-together. Another navy cardy is definitely on the cards.

See how the cardy pooches out at the back? Ick. Also, I wonder if this skirt would benefit from a petticoat to bulk it out? Or maybe it would look super outlandish. Hmm.
Ooh. Maybe if I re-hemmed it I could use a wide facing that would give the hem more oomph?

How great would a structured blazer look instead of a slouchy cardigan? It's on my "one-day" list...

SO guys! Do you have any styling tips that will save the day with this skirt?
And: Shorten or no? :)