It's another La Sylphide! I already made the dress version once, and the skirt version too! This was definitely the most challenging version yet, as it is chiffon!
I'd already handled the fitting on my previous version, so it was all about the construction.
This notorious fabric demands great care, and I did my best to do that. It was a slow construction process, which went fairly smoothly... until I accidentally chopped a gash in the hem. But let's skip that nasty detail for now! 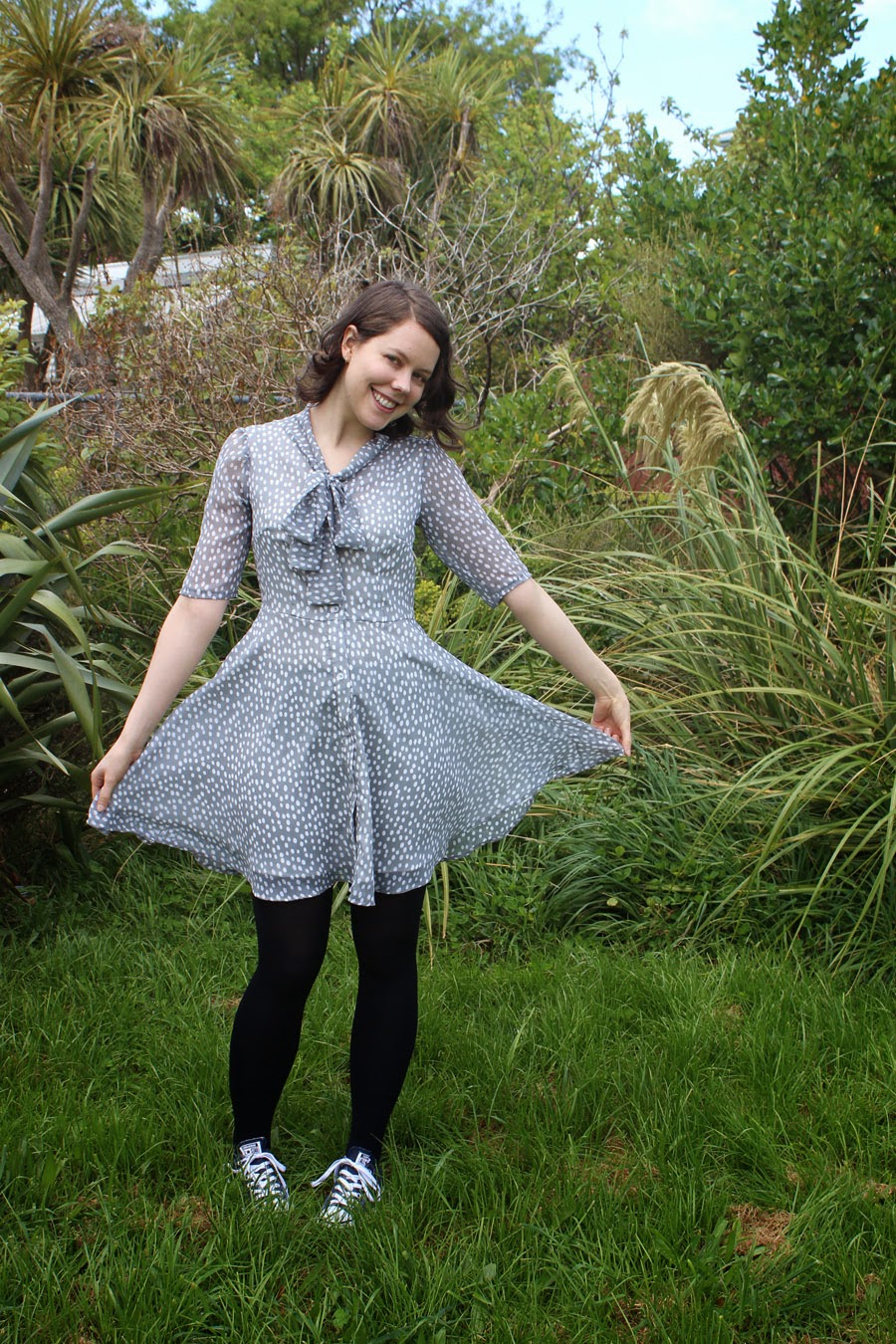 I can't believe it's getting warm enough to wear this kind of thing! I wore this at fabricabrac, a local fabric event where I met loads of the WSBN girls (you'll ALWAYS find these guys where there's good fabric to be had)!
Thanks to Kat for taking photos of me :)

While I was there I hooked up with another La Sylphide wearer (totally unplanned actually!), fellow blogger Nikki! 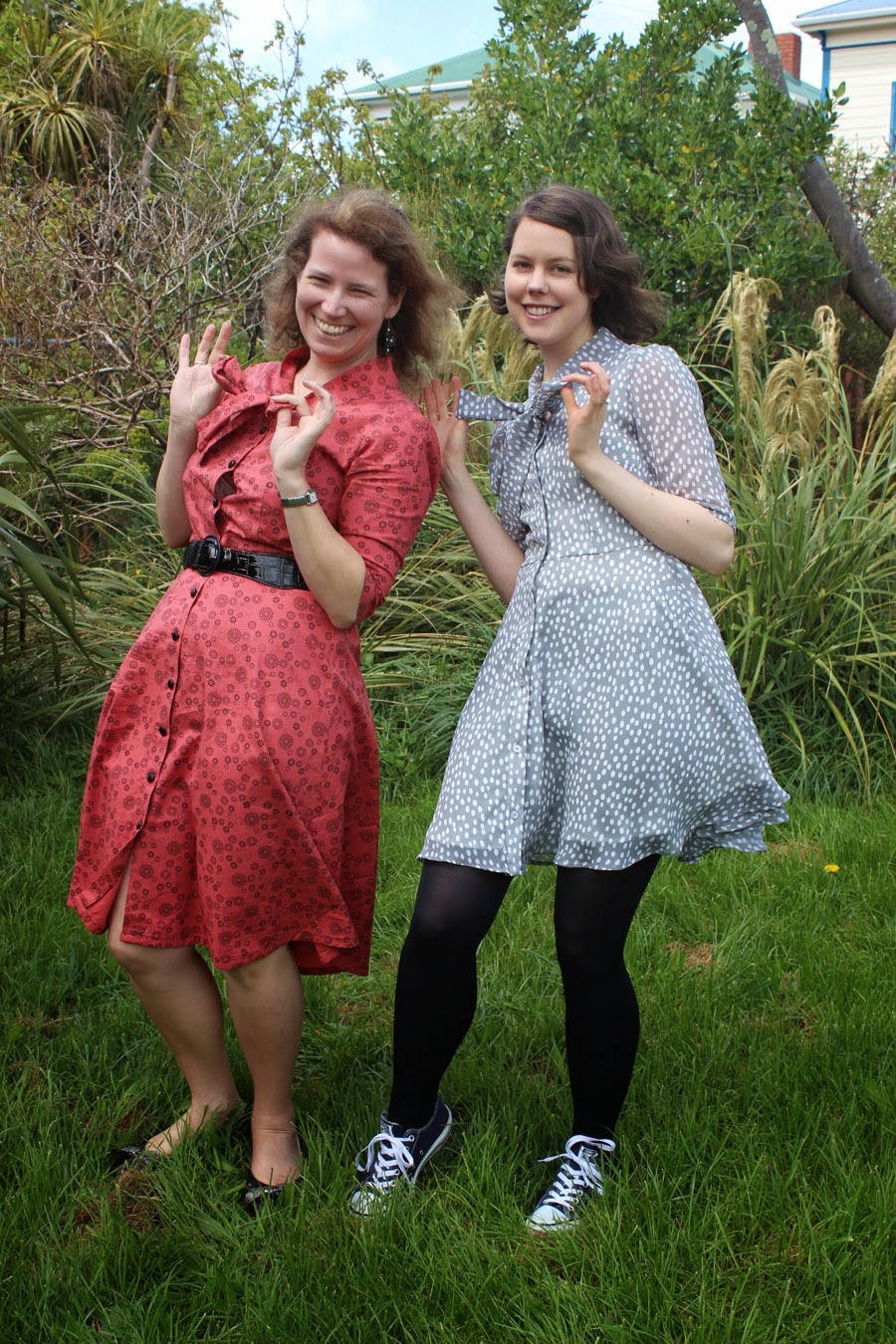 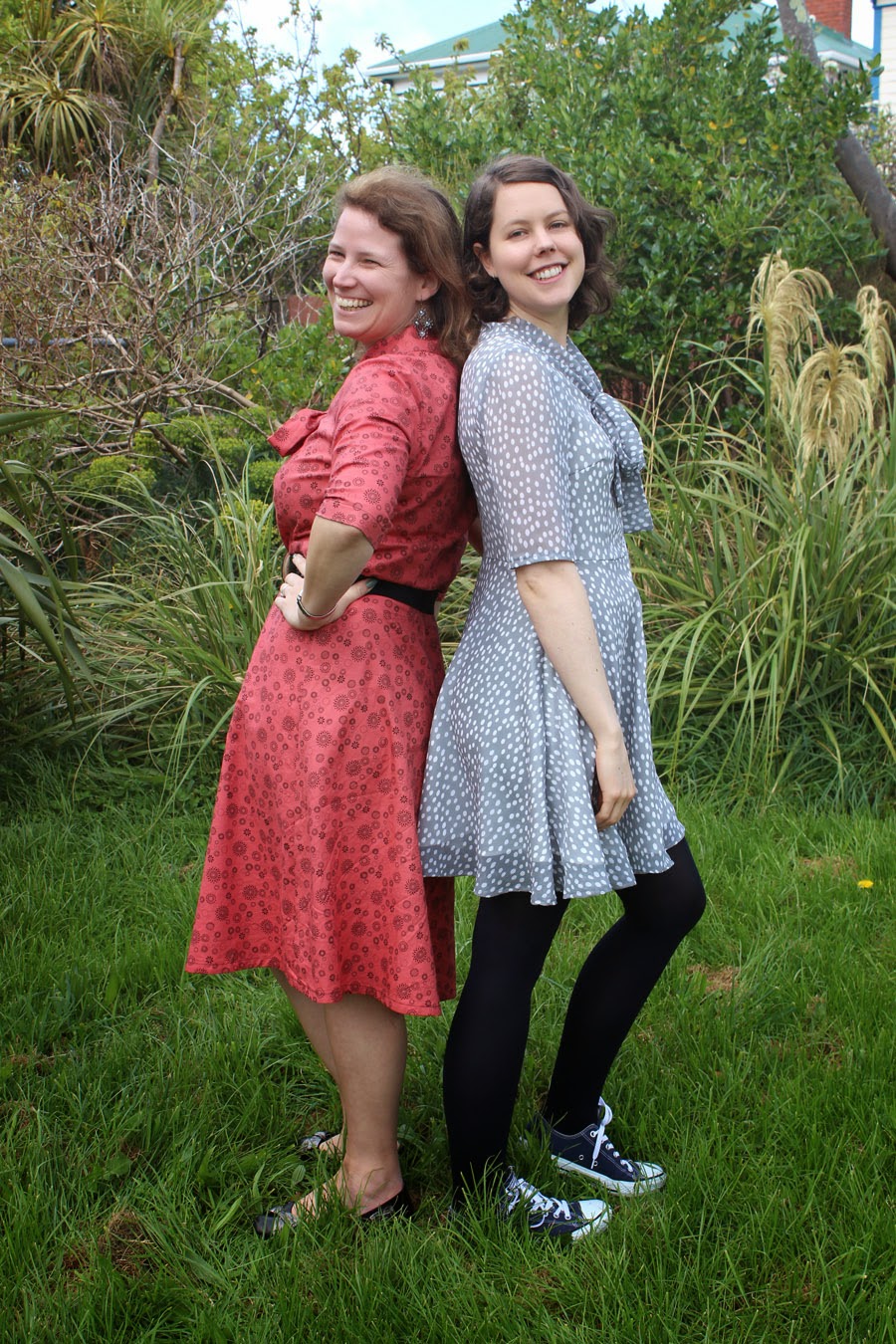 I decided to underline the bodice with my white acetate lining, leaving the sleeves as one layer of chiffon. I lined the skirt part of the dress, and as my new philosophy is "just make stuff up", I figured out my own way to stick it in. The button placket is underlined with the acetate, and the lining is attached down the centre front to each side of the placket, but hangs freely around the rest of the skirt. It's similar to the way the Colette Beignet skirt is lined, actually!

It's hard to explain, and I totally neglected to get pictures of the guts! Gah, bad blogger! But I'm in another city right now so that's my excuse. 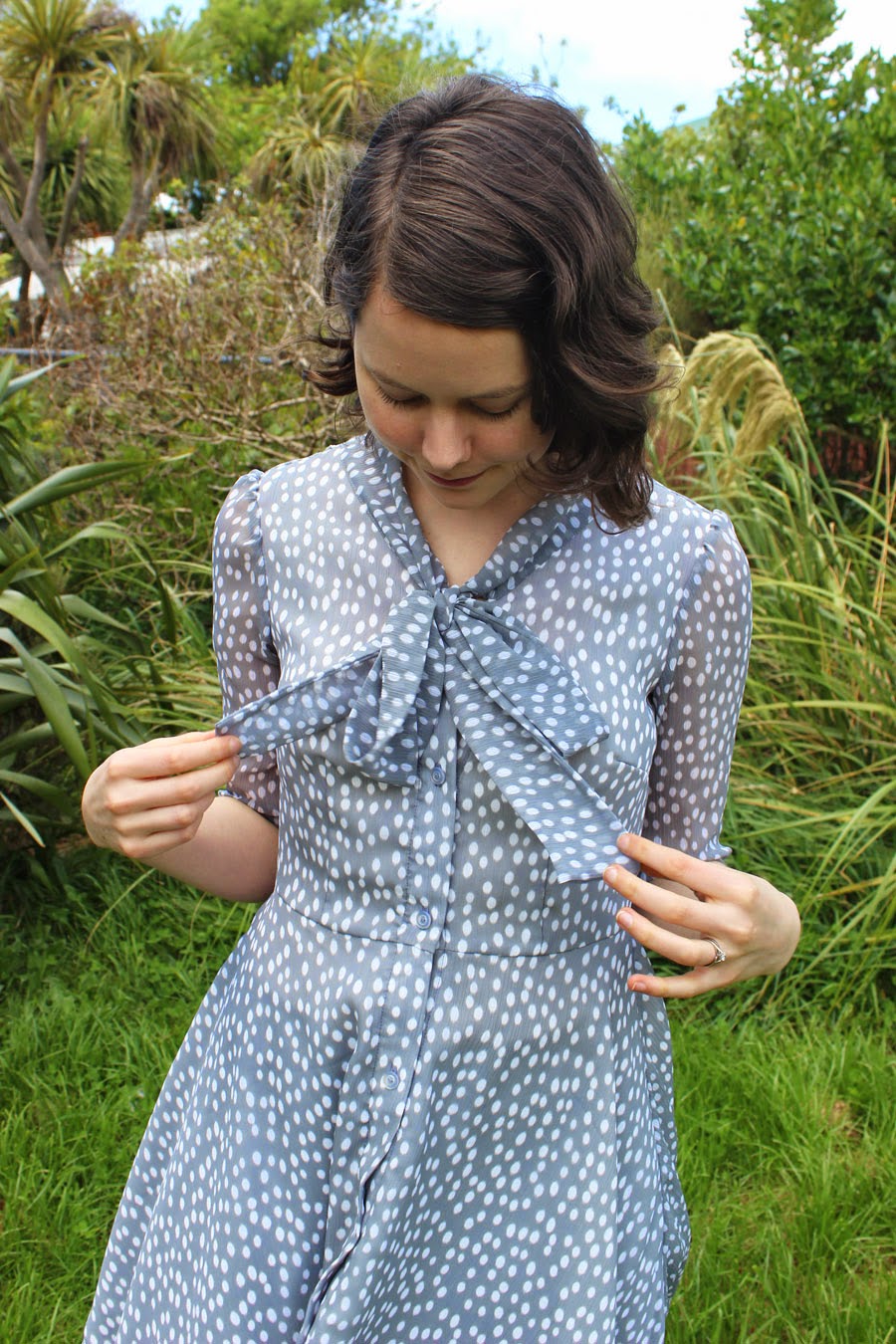 The bow isn't underlined either. I sewed the dress with a combination of french seams (mainly on the skirt), and overlocked seams (on the inside of the bodice where the underlining means the seams don't show through!).
I realised from seeing the photos that you could see the shadow of where my singlet meets my dark tights underneath, so I should have worn a slip. Even with a lining, it's still slightly sheer! 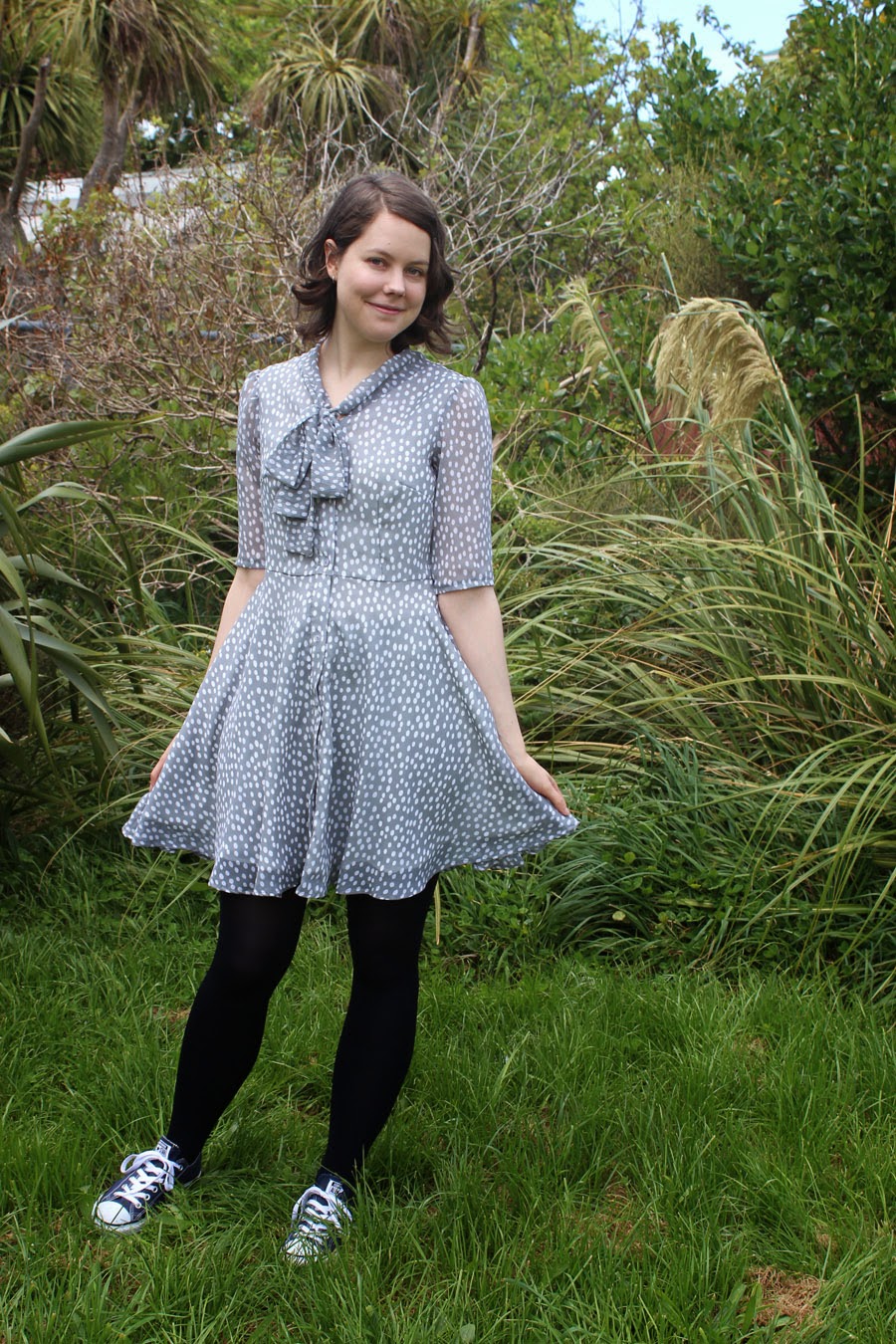 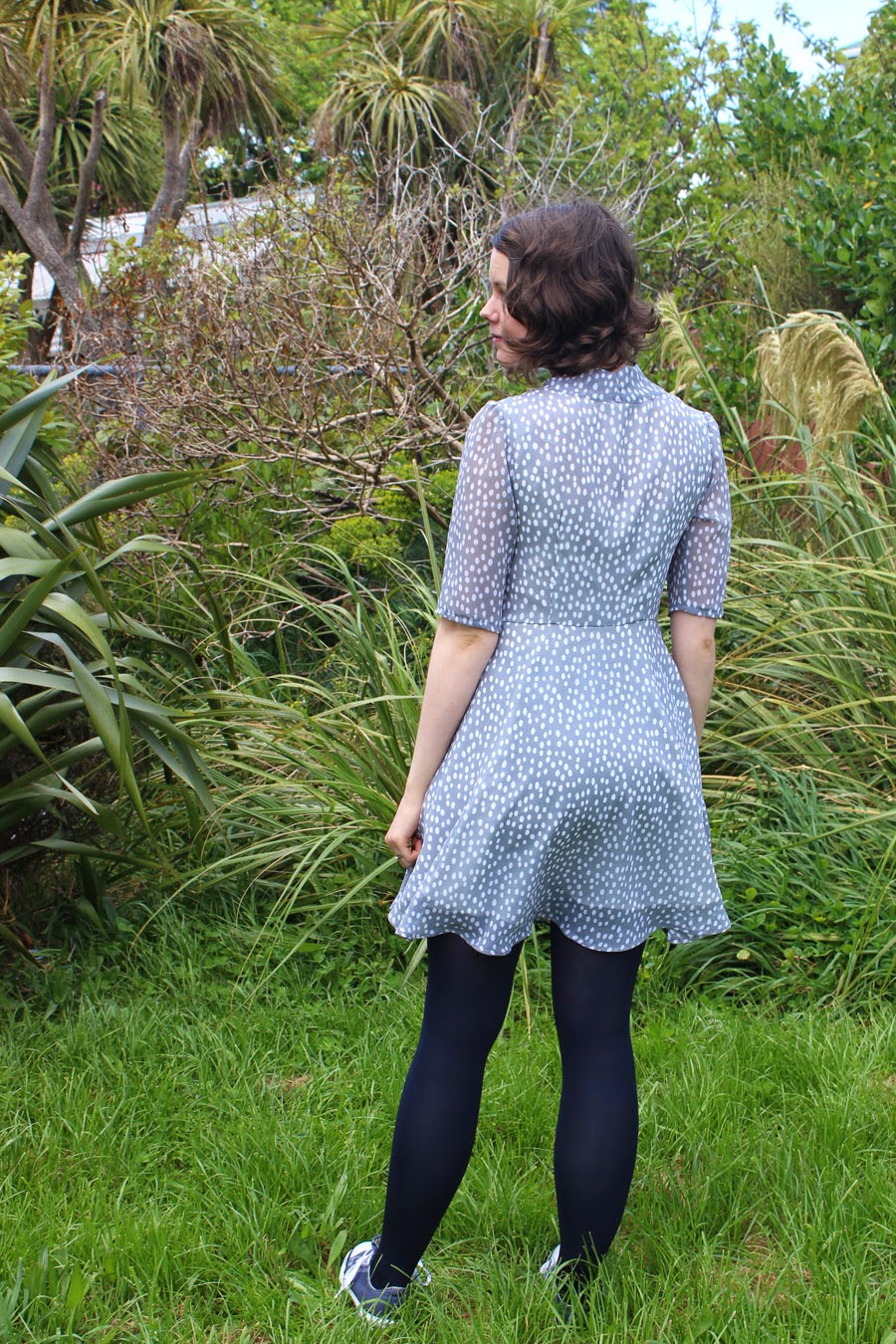 This length is as short as I'd like to go. I think I'll keep the skirt a bit longer next time. I had a moment of brainlessness when trimming the hem, and somehow managed to cut a 1" gash right near centre front. Such a panic moment! I didn't want to shorten the skirt any more, so I just did a manky diagonal blend, shortening only the centre front, and quickly blending out to the longer length.   It was suuuuch a hassle, as I had already finished the bottom of the lining and the placket, so I had to redo them (several times as I kept stuffing it up. NOT FUN!). You can't even tell the length is different at the centre front, thanks to the general volume of the skirt. Phew! But seriously, the hem is quite a mess when you see it up close. I've spared you the horror of the close-up, thanks to forgetting to take detail shots! :D

As with my last version of the dress, this fabric is a polyester. Not my favourite fabric for a sleeved garment. It gets a bit sweaty which is gross. But I'd rather cut my teeth on a polyester than worry about ruining a gorgeous silk yet. This fabric was given to me by fellow WSBN-er Gemma! Thanks!!
Actually sewing it wasn't too bad, but MAN, it dropped hugely on the bias. When I chopped it off to level it, there were sections that were about 4" longer than the rest, with one side significantly more droopy. In this post, Sherry describes most fabrics having a dominant grain which causes the opposing bias sections to hang differently. I think it sewed up a bit weirdly on the side seams. You can't really tell from this picture, but it hangs a bit strangely, so I probably should have let it drop before seaming it up. Again, I wish I had a detail shot!


Anyway, I'm pretty happy with this dress, even though it was challenging at times! I like working with fiddly fabrics (well, SOMETIMES). It makes you feel very accomplished when you get it to behave. 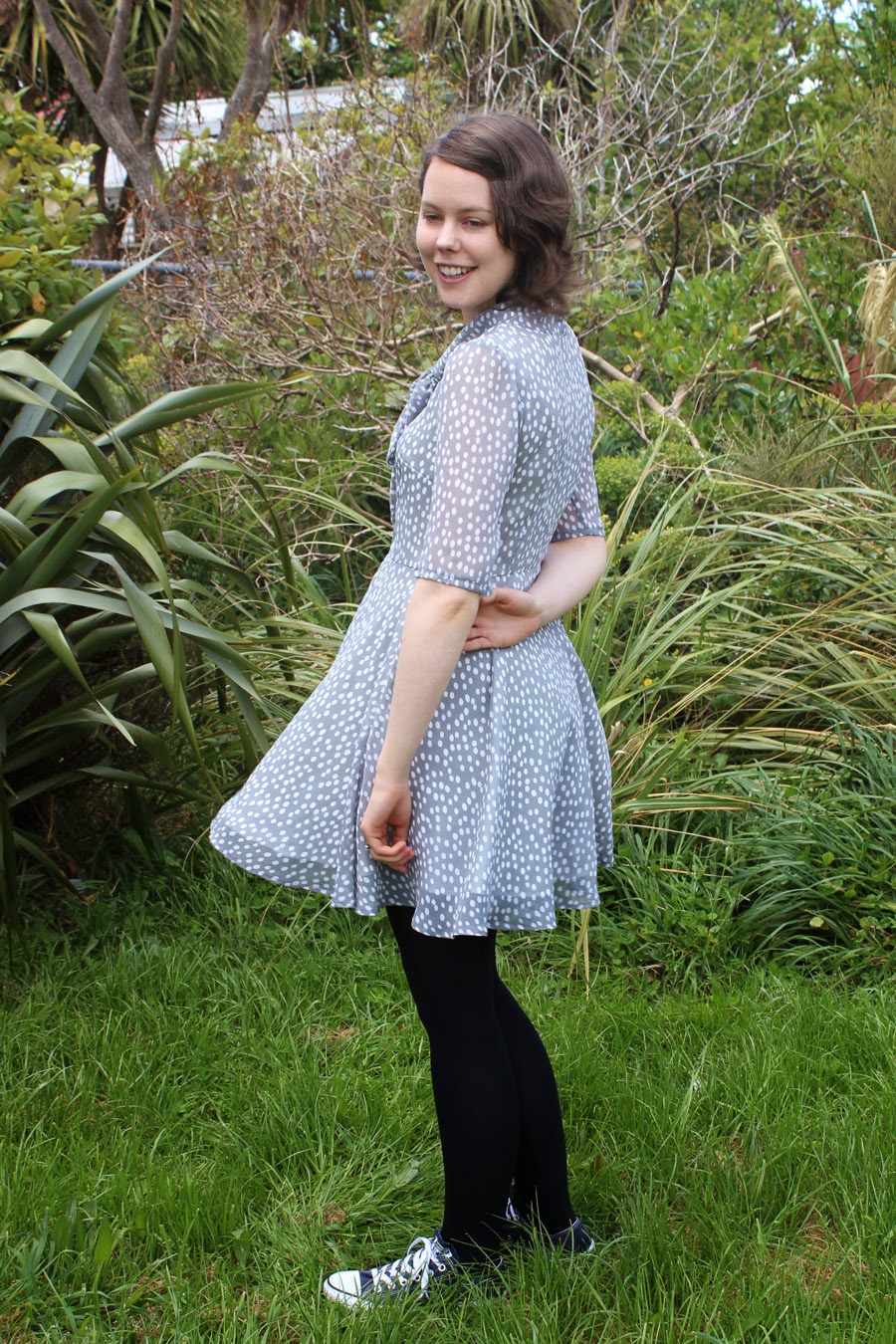 As you can see, I wore it casually with my sneakers, but it would look proper classy with some nice heels.

This is my third dress made utilising the darted bodice block I developed early in the year. So happy for circumventing another hellish trip to muslin-town! Yaaaay! In fact, I think that's worth of a new tag on my blog.

Oh yeah, and me and Nikki totally stole Kat and Mel's Papercut-love pose! (With Kat's permission of course): 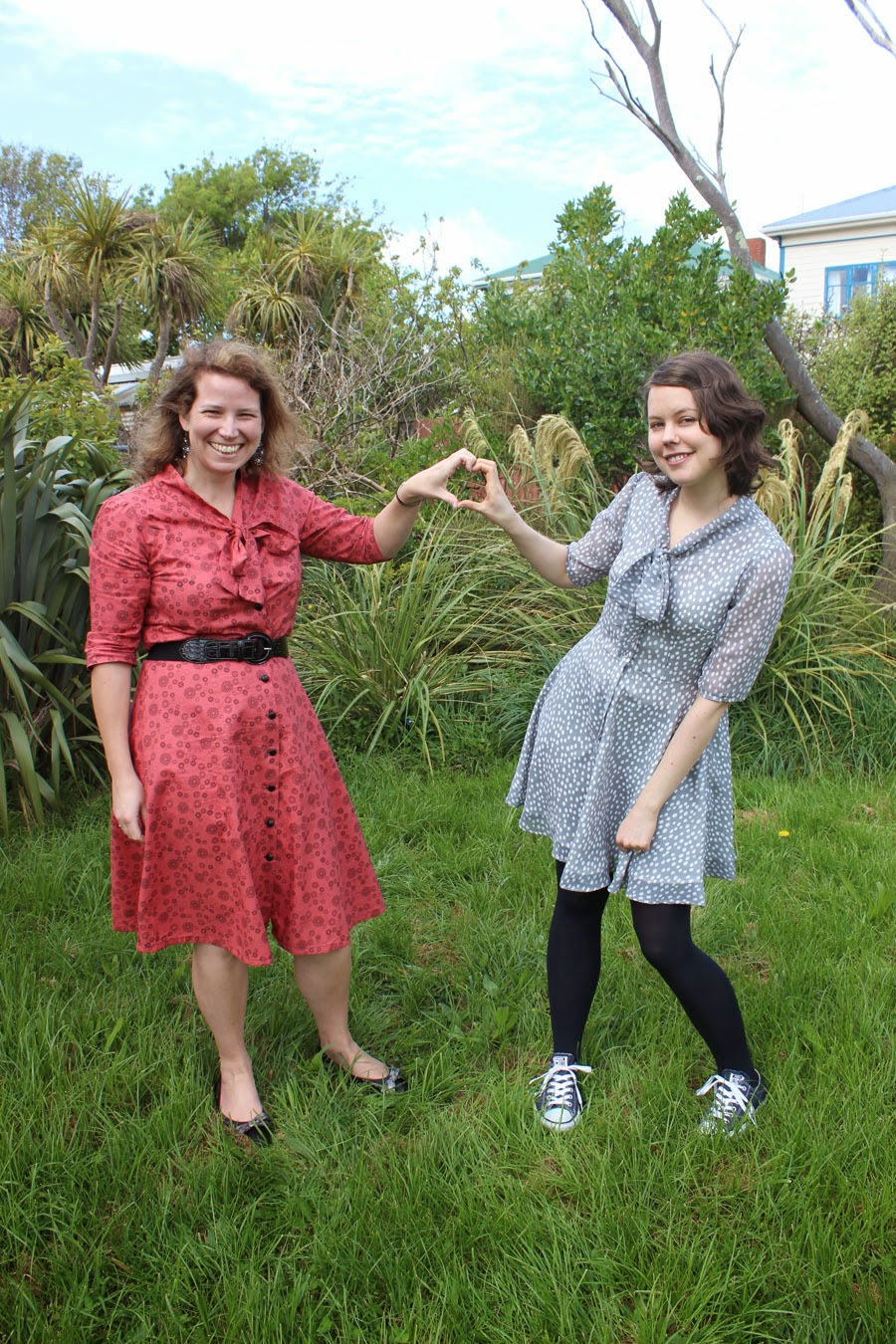 Yay to dresses, and bring on the warm weather, finally! :D 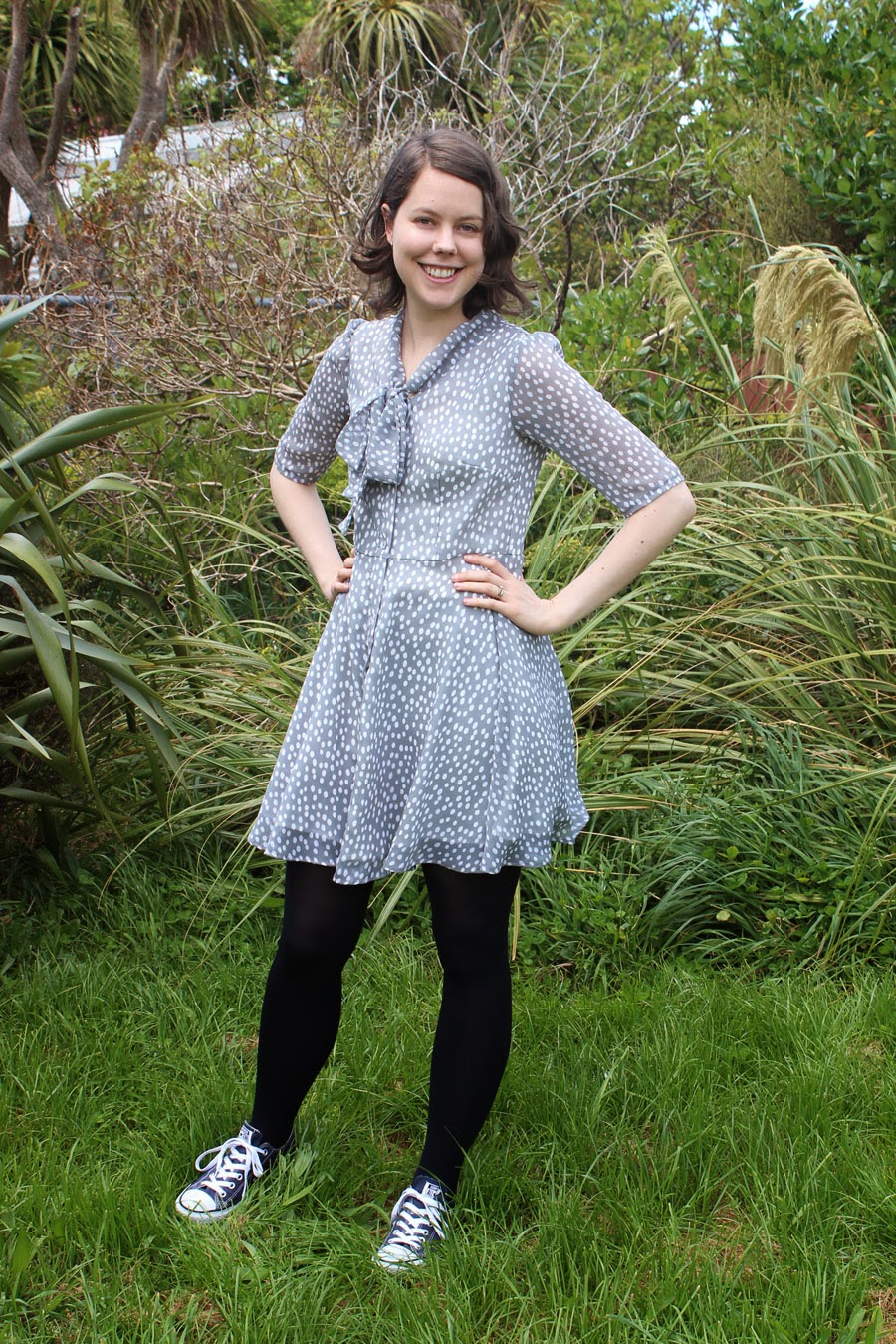