Hello! I made a top! Oh yeah, and Merry Christmas and Happy New Year and all that. 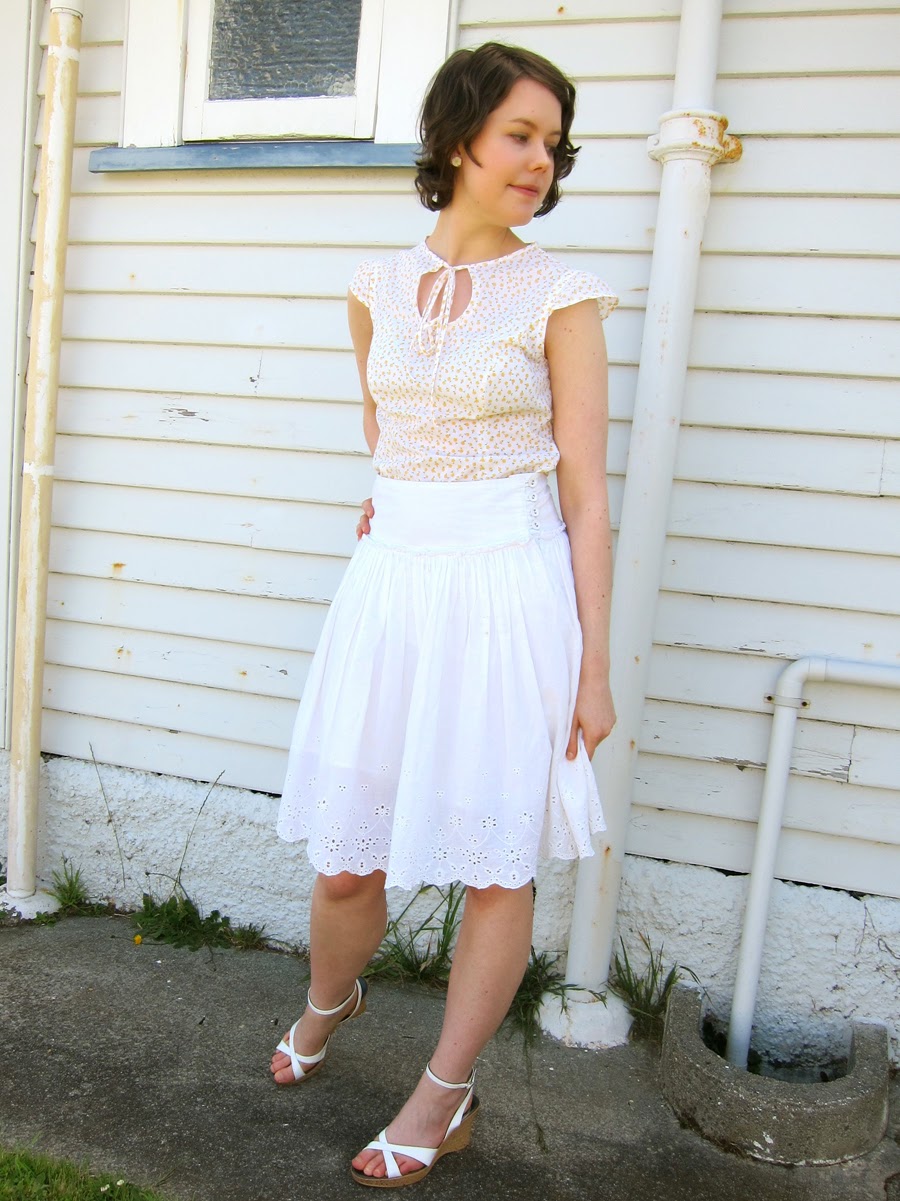 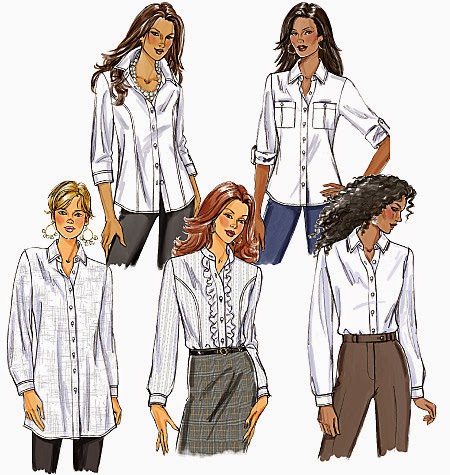 Except you may have noticed it's nothing like it. Don't worry, it's just because I'm a crazy person.

I really want to make a shirt, and have wanted to for ages, but I wanted to make up this pattern to test the fit first. So I took the button placket off, and made this top first to see if I was happy to proceed. Let me say first though, that this is not "straight from the packet". Heck no! That always looks beyond abysmal. Prior to this, I'd already made two muslins.

My usual set of adjustments is:
-Rounded upper back (this adds shoulder darts in the back)
-Large hips
-Huge sway back adjustment
-Forward shoulder
-Removal of stupid amounts of ease that plague modern patterns (although for this one, I really did overfit. I took a pattern designed to be only moderately fitted, and made it fitted.)
-Reshaping the armhole.
-Other little fiddly bits because I can't just leave well enough alone.

SO boring, right? Every time I make a new pattern I end up thinking "This would probably have been easier to draft from an existing pattern that already fits me!" Anyway, live and learn. I essentially just recreated the Pendrell blouse here, but with armhole princess seams instead of shoulder. Duh.

I also fiddled with the front princess seams in a not-entirely-successful way, so I will fix that when I make the pattern up again. I'll probably add back in a little ease too. I put in a zip on the side seam, but I could totally make it a pullover blouse with just a skodge more width at the side seams. Zips just don't seem right or necessary in a garment like this. 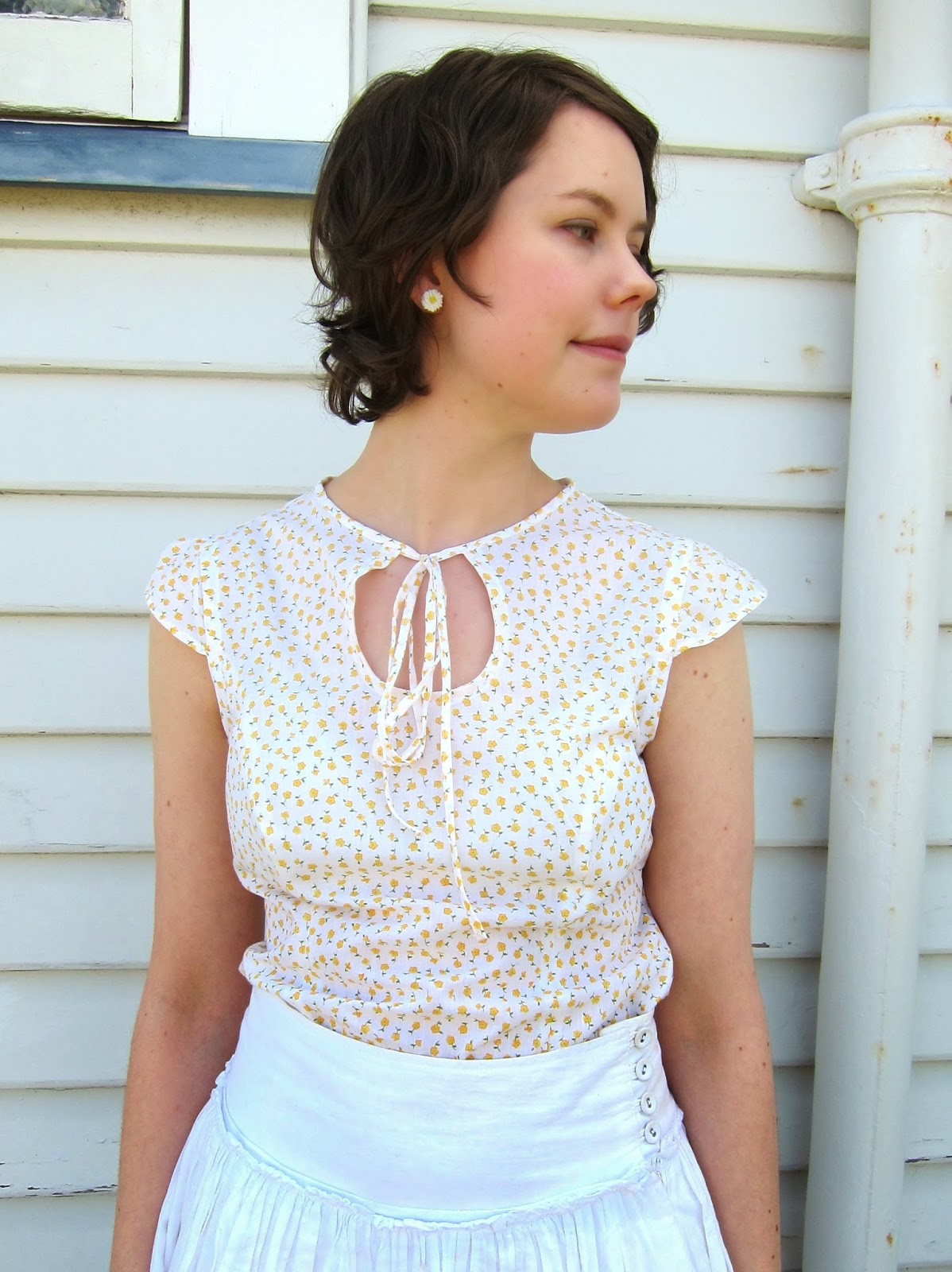 And my penchant for over-fitting really isn't necessary here either. If I'm planning to usually tuck it in anyway, it's going to bunch up, and no-one really sees the fit!

I drafted the little gathered cap sleeves by making it up and then fiddling with it. One of those things that starts out like "Oh, this will be super easy!" and then you have to keep fiddling with it to make it look right. This is not the best way to do things, but I guess it works eventually! I'm going to try it again another time to refine it further. I sort of lost patience at the end and bodged them in. Quality workmanship, not so much.

I also "drafted" (not sure such a fancy term is needed for something so simple) the keyhole. I basically did it, then found that Colette's free Laurel extras download contains everything you need to make this. Gosh, I'm just SO good at reinventing the wheel, right?? Lol. 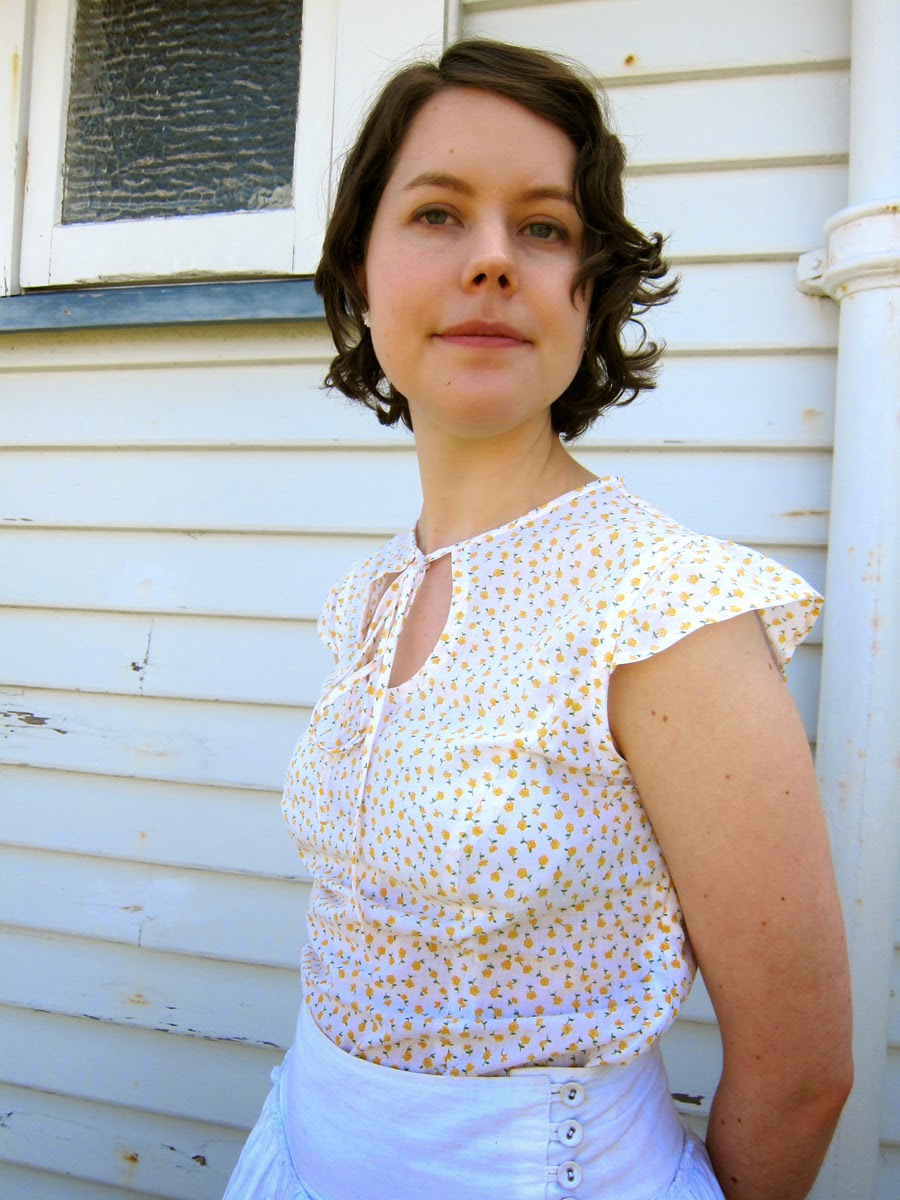 The bias strips on the neckline and armholes went okay, though I do find getting very curved areas such as the keyhole to sit nicely when they have a bias facing. For now, aggressive pressing before and after gets me MOST of the way there. This bugs me on the curviest part of armholes too. I'll let you know when I find a magic trick... but I DO find comfort in seeing Tilly's yellow Françoise sample seemingly showing the same effect around the armholes that annoys me when I do mine. Well, from what I can see, at least.
It may be best to stick with proper facings when possible, but that just doesn't work well for sheer and lightweight fabric. 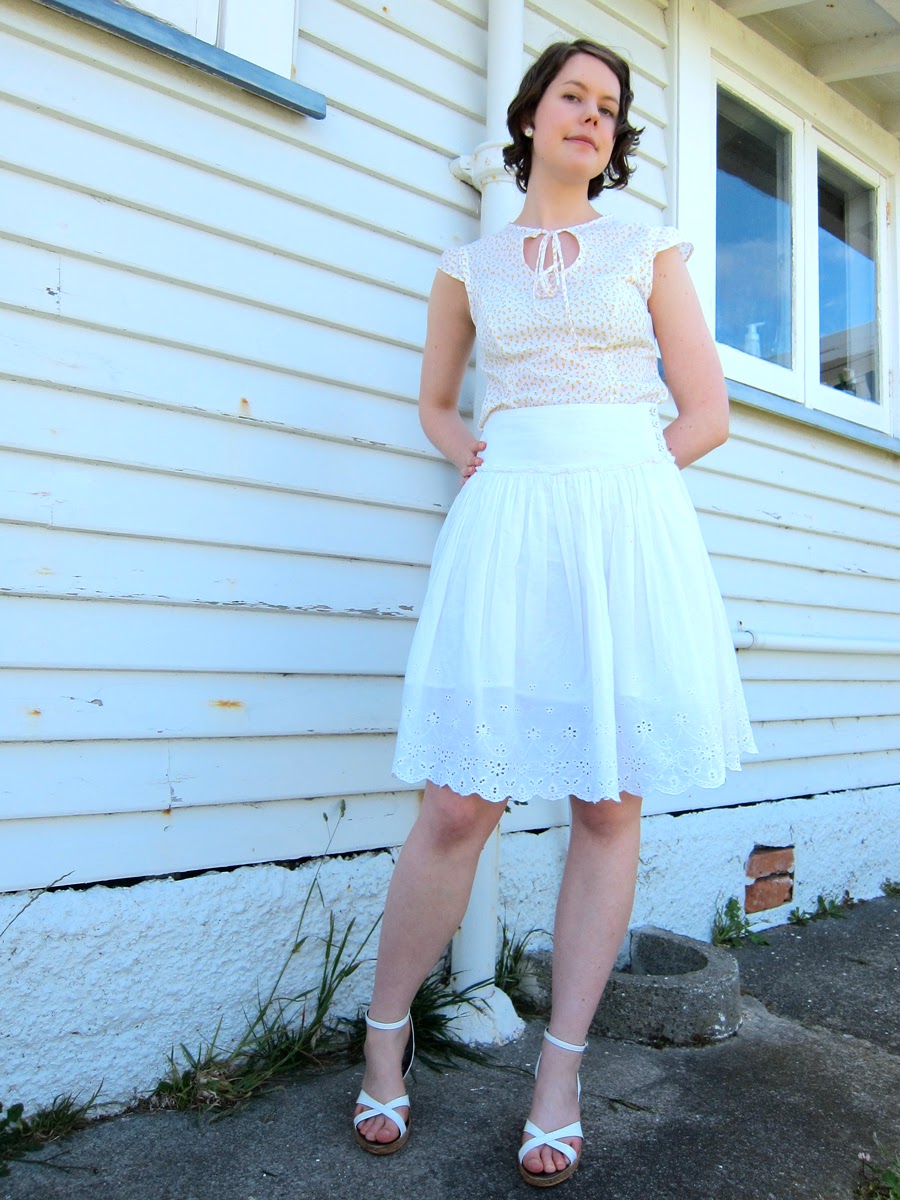 Thanks to the Dreamstress for taking these photos at a Wellington Sewing Bloggers Network  Christmas get-together :) I neglected to get shots of it from the back, AND untucked though, naughty blogger! But, I got a photo with her cute cat, so obviously you'll forgive me :) 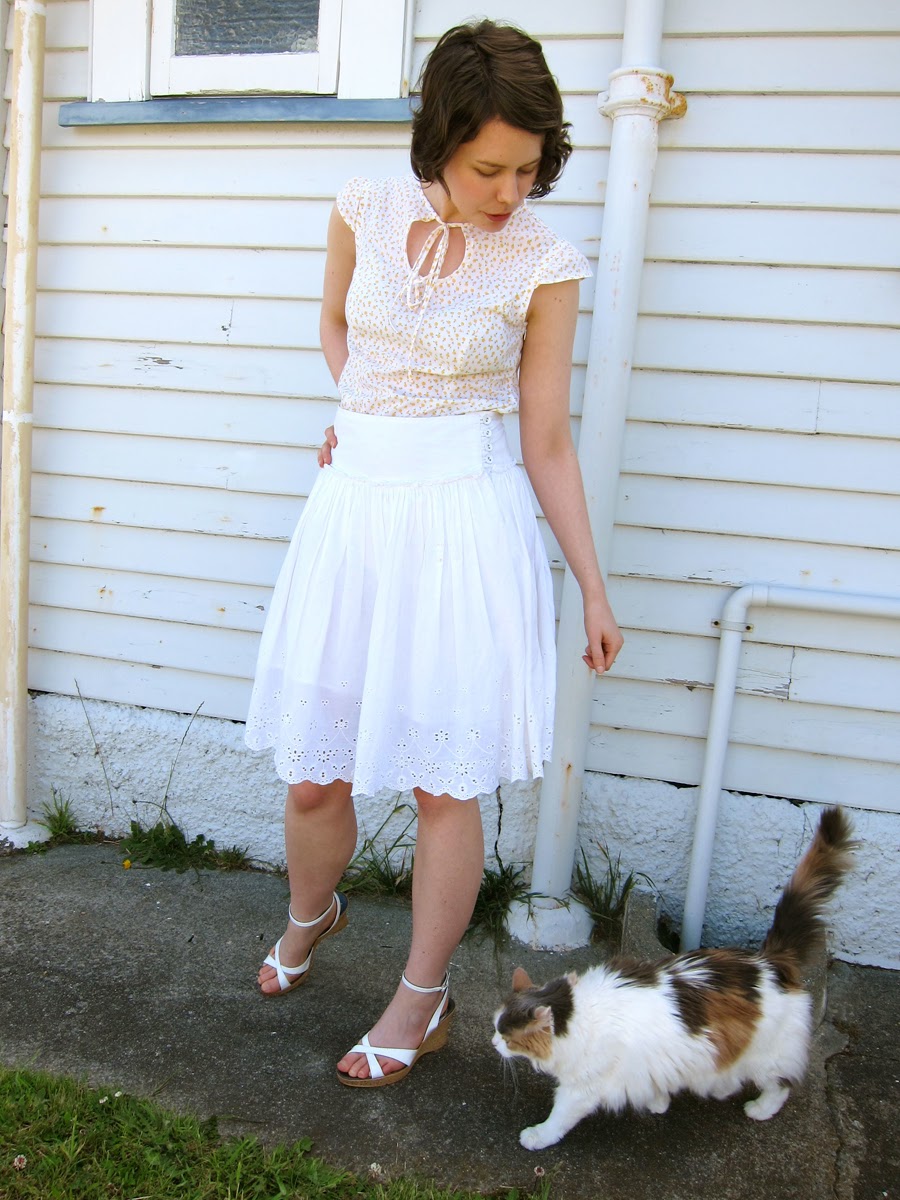