I made some accessories a little while ago and only just lucked out into getting good enough weather for photos!

The gloves are a free pattern on Ravelry called Vancouver Fog.
My project details on Ravelry here.

They turned out a lot longer than the pattern picture, but the extra length has actually been really nice on my frozen hands as I walk to work in the morning!
I can fold them back though and they look nicer that way.  I think it's because I have small hands!

I found these really quite challenging- making cables while working in a small circumference in the round.  I'm not used to either of those things so it took ages!
And don't even ask about the cast on... the pattern recommended a circular tubular cast on.  What a nightmare- I'm still traumatised, and to be honest, I don't even think it looks that amazing for all that effort, lol!

I also made this Crochet Cloche, which may I add has a HIDEOUS sample, lol!  I looked beyond for the potential within!
My notes are here on Ravelry. 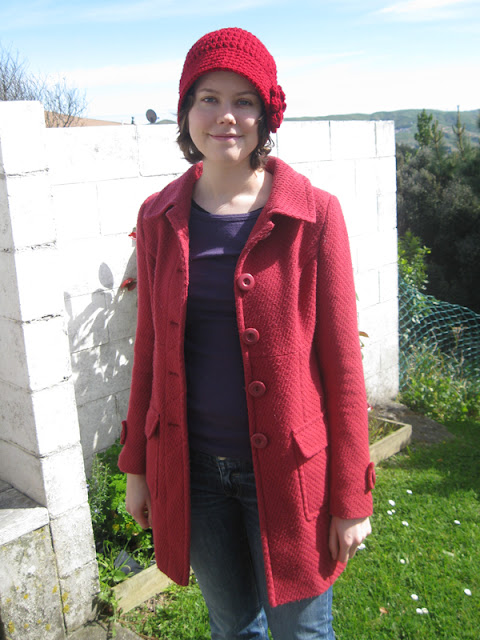 Okay so be honest guys, does it evoke the graceful 30s vibe I wanted it to, or is it 90s bucket hat? (eew!) 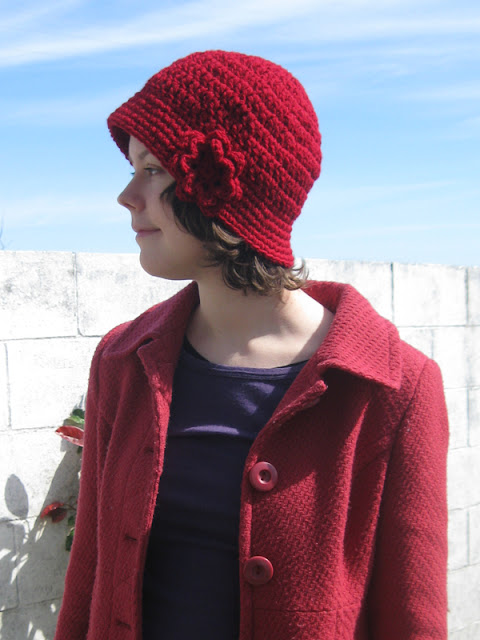 Probably not my favourite thing ever made, but it does keep my head damn warm!

Oh by the way guys, GUYS, I made an important discovery recently.  I hate recaptcha comment verifications so much- and I realised thanks to this post that my blog had those annoying things on it!!  They are removed now, so be free!!  Comment without fear!  I hope to hear from more of you now :)
And guys, don't forget to check your blogs too- recaptchas are a giant nuisance, right??
Posted by Johanna at 12:18 23 comments:

You know how everyone who makes Renfrews is all "Oh it's so fast.  It only took me 2 hours including cutting."  Well guess what?  This took me ages, so there!  I took ages cutting it, and I took ages sewing it too!  I am a seriously slow sewer.

This time I made a stripey version... look familiar?  Yes, I'm just like Tasia.  But I swear I had the fabric before she even released the pattern!  So she copied me, okay? 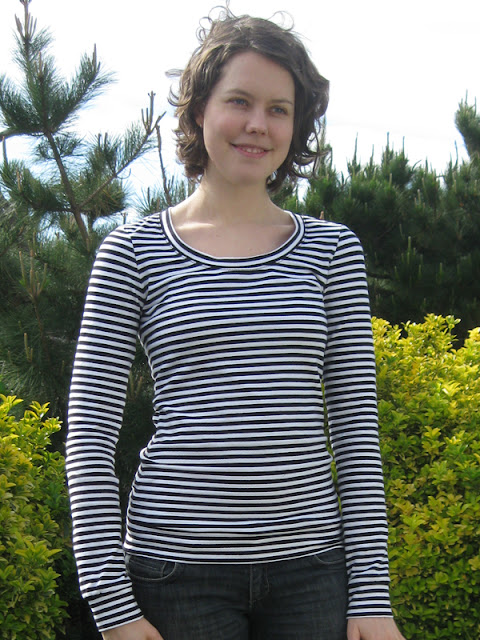 The stripes definitely didn't make it easy for me.  They were all nasty and wavy on some bits of the fabric for one, so it was a nightmare to cut.  In the end I just had to do the best with what I had.

Luckily, with a bit of fudging, I managed to match the important seams quite okay!  It took me quite a while though and I did have to redo some bits!  I also tried for ages to match the armhole stripes before figuring out it's not really possible.  Even Tasia's don't match!


The pictures aren't so hot sorry.. the weather around here has been horrible lately so I was lucky to even get these.  I really need to learn not to have my eyes shut in all my pictures too!  Plus I was feeling a little ill.  Soo yeah. 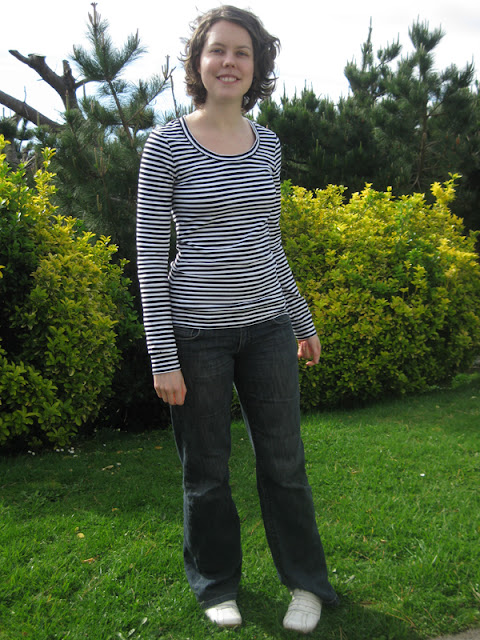 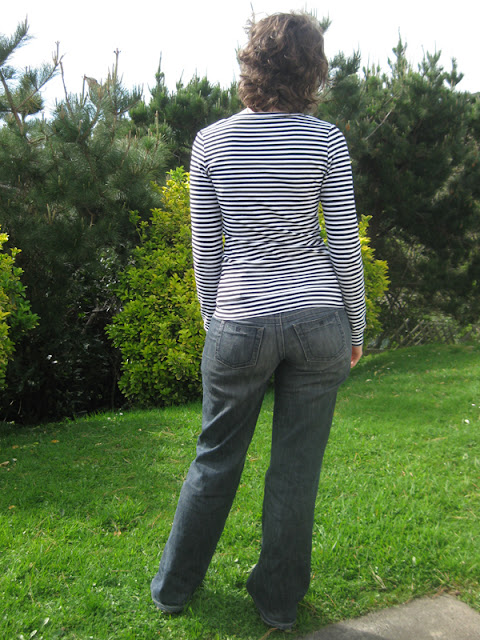 I made a few alterations since my first test Renfrew.  It definitely fits better, but not perfectly!  Of course most knits have different properties so it's hard to compare fit.
I made it bigger in the shoulder area.  I also took out some length and went up a size in the hips...  Though I think I could go even further on those two alterations!
It still tends to ride up over the bust.  I wonder why it does that... when looking at these photos I just want to give it a good YANK!

I also noticed it still has some wrinkles around the shoulder area.  I realised I probably need to do a sloping shoulder adjustment just like the other patterns I've fitted so far.

Overall I'm happy with it as it's an improvement over the last and I love stripes! :)
Of course I will make another version and hopefully it will be better again! :)  Cowl neck view, anyone?

Onto the next knitting project!
I'm going for my most challenging yet.
Milena- a free pattern on Ravelry.  It's a bottom up cardigan in 5 ply cotton (my finest gauge yet- eep!).  Also, it has rather scarce instructions- no gauge and no schematic.  Hmmmm!  But so cute, I can't resist.

I've created a gauge swatch and tried to calculate how big it will be based on the number of stitches in the pattern.  I've got about 3 inches of negative ease at the bottom.  That seems like quite a lot!  But I tried wrapping it around me and it seems it will stretch to fit me.  Well... it better.  lol!

Of course my gauge swatch was for the stocking stitch on 3mm needles, while the ribbing is on 2.75mm needles.  So I don't know what that means for my calculations.  I THINK I'll be alright.  Maybe.

Anyway, I have a lesson for you all.  I bought some circular needles to knit this on and it was torture!  Why?  Because the cheap needles had a horrible join that the stitches kept catching on.  It was incredibly slow and painful.

So the basic moral of the story- buy the good needles.  Hobbies should be fun right?  I went out and bought some Knit Pro needles (Knit Picks to U.S people), and it's night and day.   Lesson learned- don't waste time on inferior tools friends!  They may be cheaper but not worth the pain!

Here is my small amount of progress.  I have a feeling this knit will take me forever, but that's okay.  I really enjoy the process (when I'm using decent needles that is!). 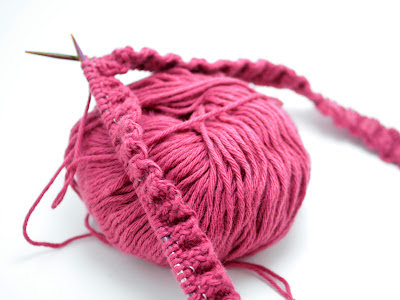 What do you guys think- any thoughts on the ease factor?  Will the ribbing stretch enough?
Do you obsess over ease like me?  Heh heh :)
Posted by Johanna at 22:25 11 comments: