Don't be judging. Yep, it's another Renfrew mod.
I considered not posting it but I am, so there!
It's in a red wool double knit, which I was scared of ruining because it was expensive, haha!

I paired it with my trusty wool circle skirt which always makes it on the blog cos it's good to pair with everything. Clearly I need more of these!

I actually took quite a lot of thought on this one. You see, the neckline finish was important to me- I didn't want to put a band on it like the regular Renfrew, as I didn't think that would work with the sharp angles of the shoulder seam. Also, the whole point of a boatneck is its elegant simplicity- I didn't want extra visual mess around it!

In the boatneck Renfrews I'd already linked in my Renfrew mods list, there were two different ways they'd done the neckline- one has a narrow top stitched facing which is stretched so that the neckline cups to the body instead of flopping, and one has a cut-on facing. You see, my friends? There is more than one way to skin a cat!
For my rather thick fabric, I wanted to minimise bulk. That was enough to make me discount the idea of a band, or seam, or binding at the neckline.
And simply turning under and top stitching is an inferior finish, according to what I've read. It stretches out of shape and distorts.
So I found this tip on Pattern Review- stitch clear elastic on the seamline before turning under. It stabilises your seam to prevent it getting loose and droopy, but it has enough elastic action that it doesn't fight the stretch fabric!
I found it worked well. I'll update if the neckline gets grumpy with age though :)
If I'd been a good blogger, I would totally have a close-up of the neckline. But I don't, so... sorry!
I also did this neckline finish BEFORE sewing the shoulder seams, which is different to the normal construction order.

Other than that, the other mod I made was to eliminate the bands at the hem and sleeve hems. I just lengthened the pattern pieces and used a twin needle hem. Again, it reduces bulk, and keeps it simple.

Here are pictures of the original pattern sitting on top of my modded one; you can see how the necklines have been altered. You can also see that there is a small narrow shoulder adjustment on the original tracing; that's what the red lines and overlapping is.


I allowed for a hem of 1.5cm on my neckline. If in doubt, make the neckline higher than you think- you can always chop more off when you try it on! :)

One thing I was glad about was the 1.5cm seam allowances. Quite unexpectedly for me, I found my trusty Renfrew pattern was too narrow in the shoulders all of a sudden! How strange! My theory is that the extra high neckline added more stability than the scoop neck original design, so the neckline was pulled in. It could also be to do with the clear elastic. I feel the third factor could be the thick fabric, which is probably a lot more stable than my previous Renfrew fabrics. Interesting, no? So this Renfrew has minimal seam allowances at the shoulders! I'll have to take notes if I make a boatneck Renfrew again....

I haven't really taken the time to examine the fit too closely on Renfrew since I didn't care, haha. But I'm going to try to improve it next time, just to experiment. I'm seeing sway back, but I also think it needs more width in the back so it can fit over my backside better. It all adds up to a lot of horizontal wrinkles in the back.

So you see, even though it's such a simple project, there were quite a few new learnings. That's always good.
BUT!! I promise I have some more exciting projects coming up. Hahaha! :D 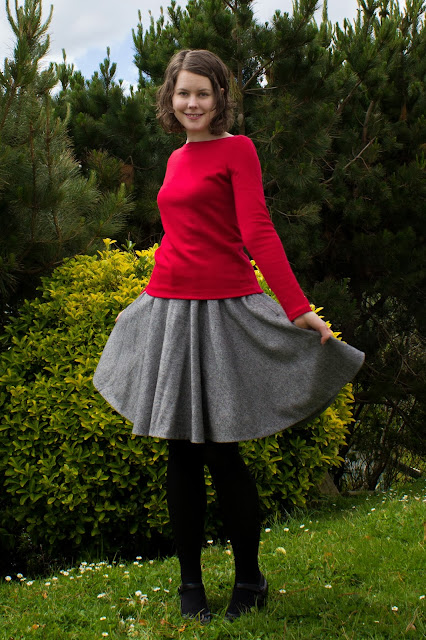