Ooh! A summery knitted cardigan! I've been planning this for ages. I fell in love with the lace and of course, the cropped design. My weakness... This pattern was a gift from fellow knitter and blogger Kristin after I finished my very first cardigan, the Miette, so I'm glad I finally made it up. Thanks so much!!
I'm wearing it with my vintage Simplicity dress, which doesn't get worn much due to its slightly costume-y nature, heh! And yes, after these photos, I went inside and changed into jeans....sorry, but I'm not that glamorous in my everyday life!

So this is the most ambitious and fancy lace I've ever knitted... I showed it to my husband and he said "It looks just like all the other cardigans you've made". Haha! Well, I'm sure YOU guys appreciate the awesomeness of this lace.
I'll share a secret with you though, since you guys are cool. I messed up one of the honeybees on the back and couldn't fix it, so I sewed it up all janky-like with yarn. That'll teach me for being lazy about putting lifelines in. I was too lazy to rip all the way back to a distant lifeline, and I didn't want to risk messing up the lace by ripping back to a spot with no lifeline- I thought for sure I'd just cause more issues, since the lace is so complicated. There aren't even any rows knit plain, you're doing lace on every single row, right side AND wrong side!
I'm not too worried about the fix though- I managed to disguise it okay, and no-one's going to notice but me. Well, I HOPE. lol :)
At least it's on the back, phew! I'm shocked I didn't make loads more mistakes than that, to be honest!
Speaking of mistakes, I only just realised when I was putting it on to model it.... I'd put the buttonholes on the wrong side!! That really ticks me off, though I guess not many people will notice. But can I just say, "AGHH!" Come on, I'm sure I'm not the only one who's done that...

When I tried it on before blocking, the ribbing barely came to my waist. "Hmm, I wonder how much difference blocking will make!", I thought, doubting the lace's stretch and my own calculations.
Well, when I blocked it I basically stretched the bejeezus out of it- see the pic I tweeted here- so many pins! It was a lot of work! And I had no idea what I was doing, haha.

Well, when I tried it on after blocking, I was amazed! It really transformed! However, the ribbing and the neckline had also been stretched out and were looking super floppy. Not the look I was going for. So I got out the steam iron and smooshed those bits back into shape as I steamed them. That helped the ribbing contract back... phew! (Wish I'd gotten a pic of the floppy stage! It looked really dumb.) Now I see these pictures, it seems the blocked length has shrunk vertically again. I guess wearing it pulls the lace back up as it stretches horizontally?? I think I'd knit it slightly longer next time. Learning lessons about lace over here!

The next smaller size was 5" smaller in the bust, so I stuck with the 33" bust for approximately zero ease. I thought 5" negative ease at the bust would be pushing it. The ribbing at the waist has a little positive ease in it. I probably should have knit the ribbing a little tighter and increased more stitches in the first row before the honeybees... well, too late now! It looks fine, just not as clingy as I like!

Also, I didn't plan it, but I think it looks really nice with my recently completed La Sylphide skirt. 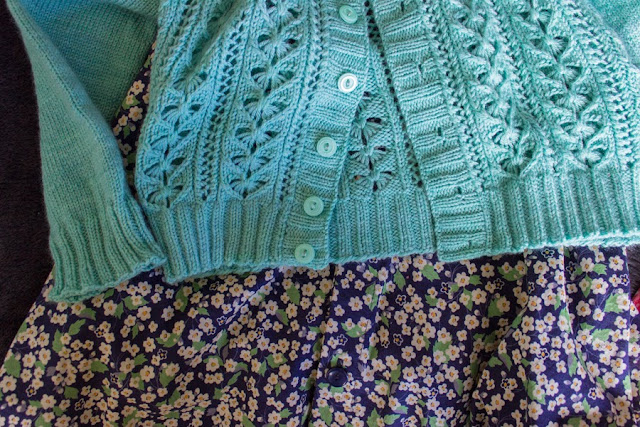 So the yarn I used is from Linda of From the Purl Side. She recently opened her own shop where she sells hand-dyed yarns- Kettle Yarn Co. I'd been following and enjoying her blog for a while, and she had a 15% opening discount. Umm how could I resist?? (Oh by the way, she has a 20% off Christmas deal right now!!) She custom dyed this shade for me. Custom!! It's so special! The yarn is beautiful and thanks a LOT Linda for ruining me for average-quality yarn. It's 80% "British Bluefaced Leicester" (some kind of fancy sheep lol) and 20% bamboo. If only I could afford yarn this nice for every project! :) The good thing about a lacy, cropped project is that it doesn't take much yarn to knit it up. So it was pretty affordable in this case.

I was worried about running out of yarn, as I bought slightly less than recommended. So I used a provisional crochet cast on for the bottom of the sleeves (they are knit bottom up). Did I get a picture? Nope! Sorry. But it means you can pick up and knit downwards later, so you can knit the bottom of the sleeves shorter if you don't have enough yarn. I totally didn't even need it though, I had leftovers when I was done! Phew!

There were definitely some tricky bits in this project. As usual I wrote complicated notes and dumped them on Ravelry here in the hopes they'll help someone else.
And as usual, this cardigan goes so well with things I totally haven't made yet, but are in my head. Heh heh! I have some lovely fabric stashed that would go so well with it. Better get sewing huh?? 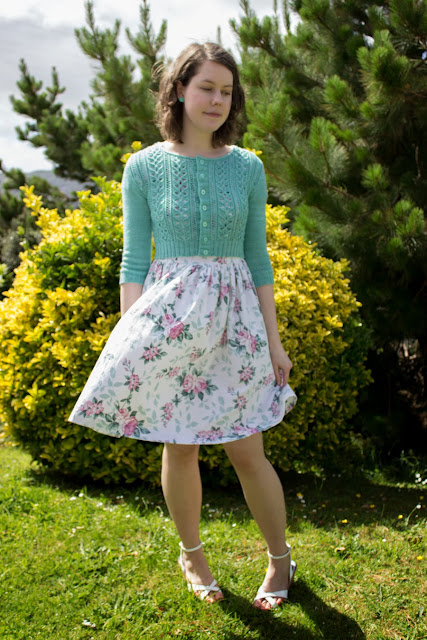