So you guys chose for me to make the Beignet Skirt from Colette Patterns when I polled you last month. And behold, I deliver!!


I gave it a fear factor of 4/5 and I think I was justified in that (self-fulfilling prophecy?). Lots and lots of hurdles presented themselves but I finally, finally got there in the end. Phew.

I'm really glad I was able to conquer this garment. I probably wouldn't have done it if I hadn't been bossed into doing it by all of you!  I definitely have to make it worth my while by making a bunch of versions (one of my goals for the year, to use tried and true patterns).

I have wanted a Beignet Skirt for so long, after stalking the amazing versions from Tasia and Andrea.

Luckily, I had some great tips from Andrea's post on the skirt- I only bought 1.5m of fabric, and it was enough. Colette recommends 2.5, that's a whole metre more! In fact, I almost got the whole skirt out of one width of fabric, getting all of the panels but one out of the first width. If you have small hips, or the freedom to flip your pieces (obviously you shouldn't do that in corduroy, friends! Pay attention to nap! :) ), you could sneak it out of less I think. In fact, yes, Tilly only used 65cm for one of hers! By the way, that's just one more blogger with a stunning set of Beignets. Must... emulate!!

A tip from Andrea was not to bother trying to turn your belt loops inside out for a bulky fabric like corduroy. Instead I overlocked one edge and folded each edge in, with the overlocked edge on top. My corduroy was quite fray-happy so I was careful not to leave any raw edges. I even finished the top and bottom of each belt loop before I folded them under and stitched them on. Better safe than sorry...
And taking another page from Andrea's magical book, I reduced the number of buttons from 12 to 8. That could save you some coins if your buttons were expensive! (Mine were a bit expensive, for some unknown reason. They look fairly average to me.)
I also pressed the corduroy seams open instead of to the side because of the bulk (except on the side seams because of the pockets). 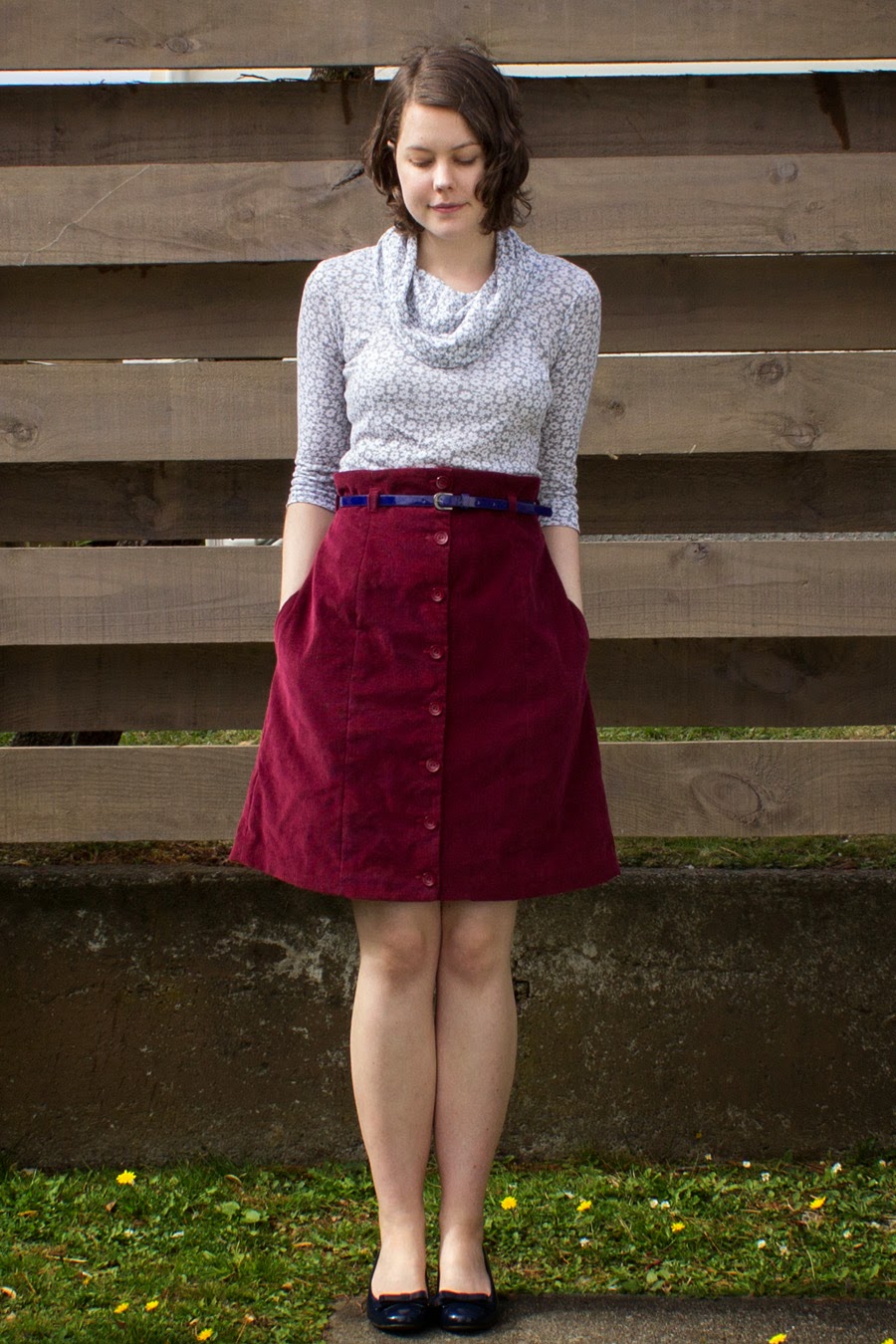 Okay so the pockets were a pain in the butt. I changed the construction because their way didn't make sense to me. I saved my long-winded blathering for my pattern review. Figuring out all the wee details of construction take up so much time, but now I've sorted them out, hopefully subsequent versions will be a breeze. Or I'll be super lazy and omit the pockets...No, pockets are too great.

I didn't want to make the tie belt for bulk reasons, but I wouldn't wear it without a belt to define the waist. Ooh it's so flippin' fancy.  (You can tell I'm a casual girl cos I think belts are what fancy people wear.)

I made two muslins, but realised too late I'd totally done it the chump way and made it way harder than it had to be.  Sigh!! Because the pattern ran large, it sat below my waist.

So I raised it to my waist by taking it in, but I only realised later that DUH, the skirt sits above the natural waist! So it was still too low!  Cue a multitude of adjustments.  I got there in the end...I could do a separate post if people wanted to know all about my behind. Heh. 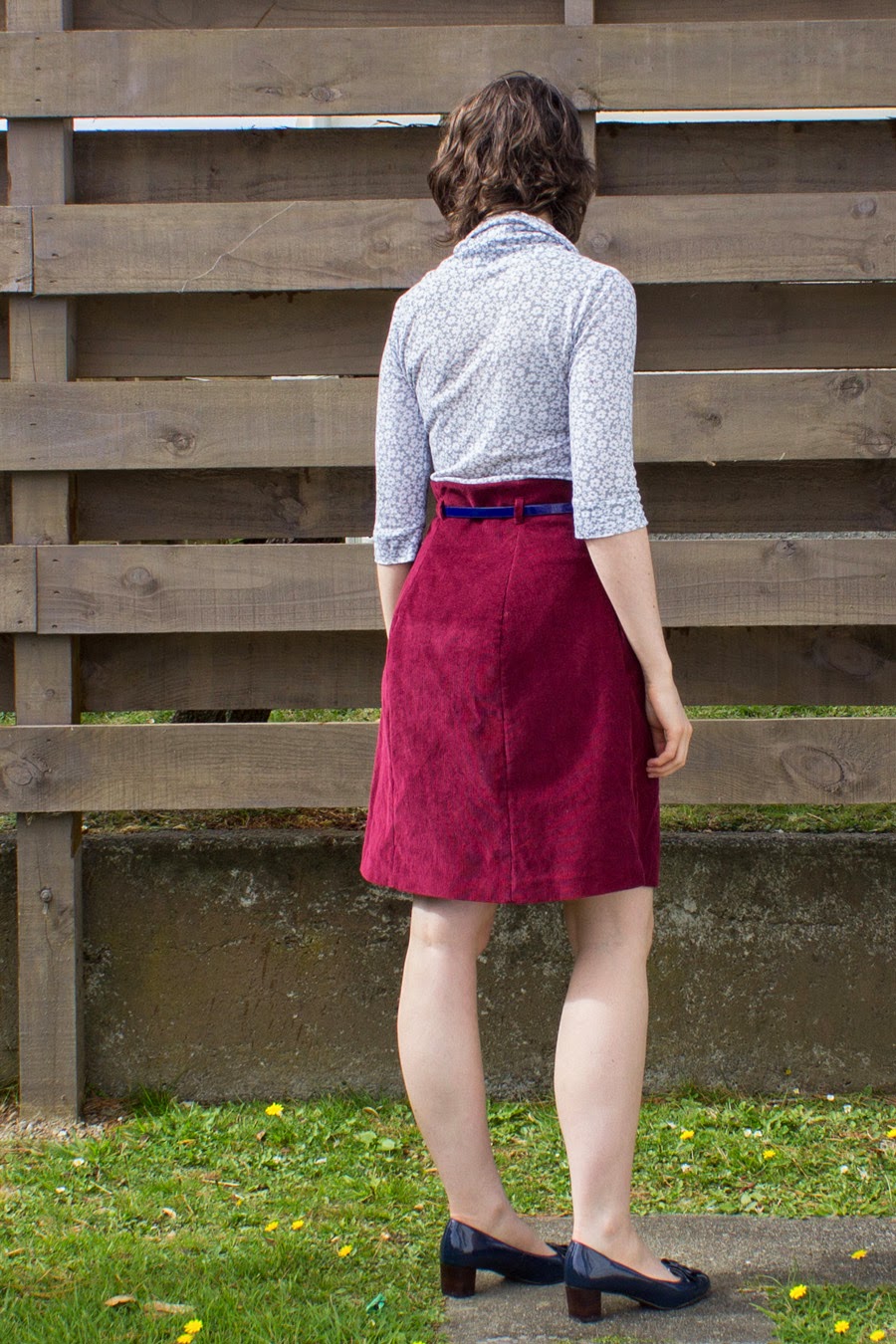 Anyway, once the changes had been made, the seam lines were all changed so much I had to totally redraft the lining and all the facings. It took me ages to figure out how to do it and then do it (the lining hem has to line up to a precise point at the centre front and get sewn to the facing etc.) And when I was sewing it I could NOT figure out why the front facing didn't line up (because I'd drafted it the wrong length for some idiot reason!) If I'd just checked that straight away it would have saved me a LOT of time. On the plus side, I guess I know how to draft all that stuff now??Oh, Here's another plus side, I finally got this skirt I've been wanting to make forever! Celebrate the good side!

I managed to convince myself while making it that it was going to be too small. I do this all the time with fitted garments! Talk about paranoid. But a muslin doesn't act the same way as the final garment.  My corduroy garment has interfacing, thicker fabric, and facings, and I worried I hadn't taken that into account enough. However it DOES fit, to my relief. Haha! I will conduct field testing to make sure it stays comfortable all day. THEN I'll make a squillion of 'em, yeah?

To be honest, everyone seems to rave about Colette's instructions, but I was underwhelmed. They were slightly sparse on the diagrams and details and written no clearer than the Big 4, I thought. I made notes on my pattern instructions for next time. BUT, when I was having issues with the mess I'd made of the pattern redrafting, I e-mailed them and Sarai was super helpful! You really can't beat that for customer service, can you! So all in all, the pattern gets a thumbs up! :) Better keep my eyes peeled for more Beignet fabrics... ;)

Ooh, by the way, of course you recognise my Renfrew I've paired with it, yeah? I think this this skirt is very versatile, and I hope to make some cute tops to go with it...
I had a lot to say about this pattern, but I haven't even talked about the fabric yet! I took care not to press the corduroy severely, and put my leftover corduroy underneath my skirt on the ironing board while pressing (with nap facing the same way as the skirt), to avoid mashing down the nap.. Threads has a great article on corduroy. They even recommend shaving your nap down in the seam allowances for bulky corduroy... tee hee! I didn't do that, but it amuses me.
Obviously making sure all the pattern pieces were cut with the nap going in the same direction was important too. I used a plain cotton for facings, to reduce bulk. 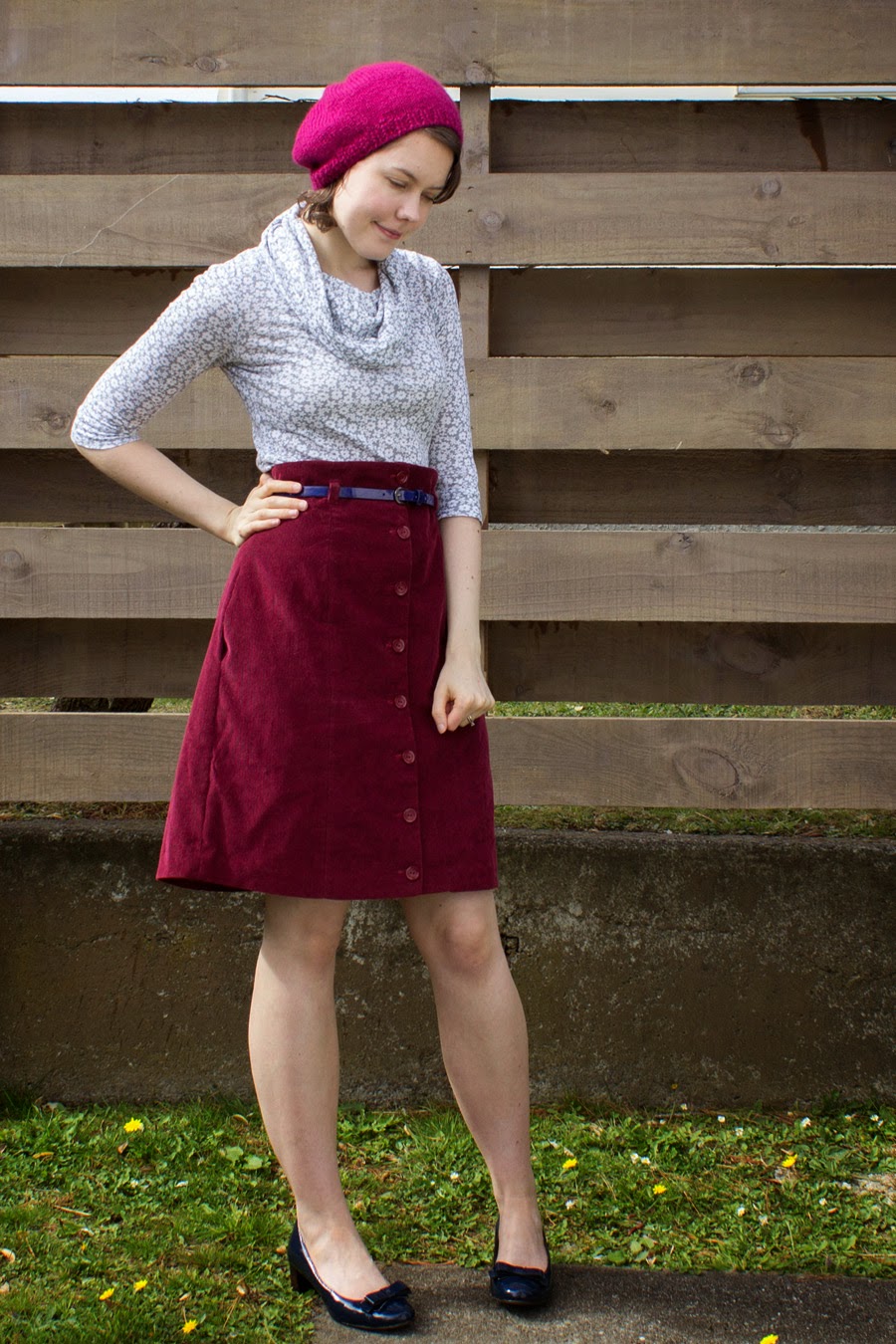