I am a sucker for a sewalong, to my own detriment. I totally squeezed this Sewaholic Cambie out at the last minute just to be one of the cool kids and join the Sew Dolly Clackett sew along!
Sorry about the bad quality photos, but well, at least I finished the dang thing! 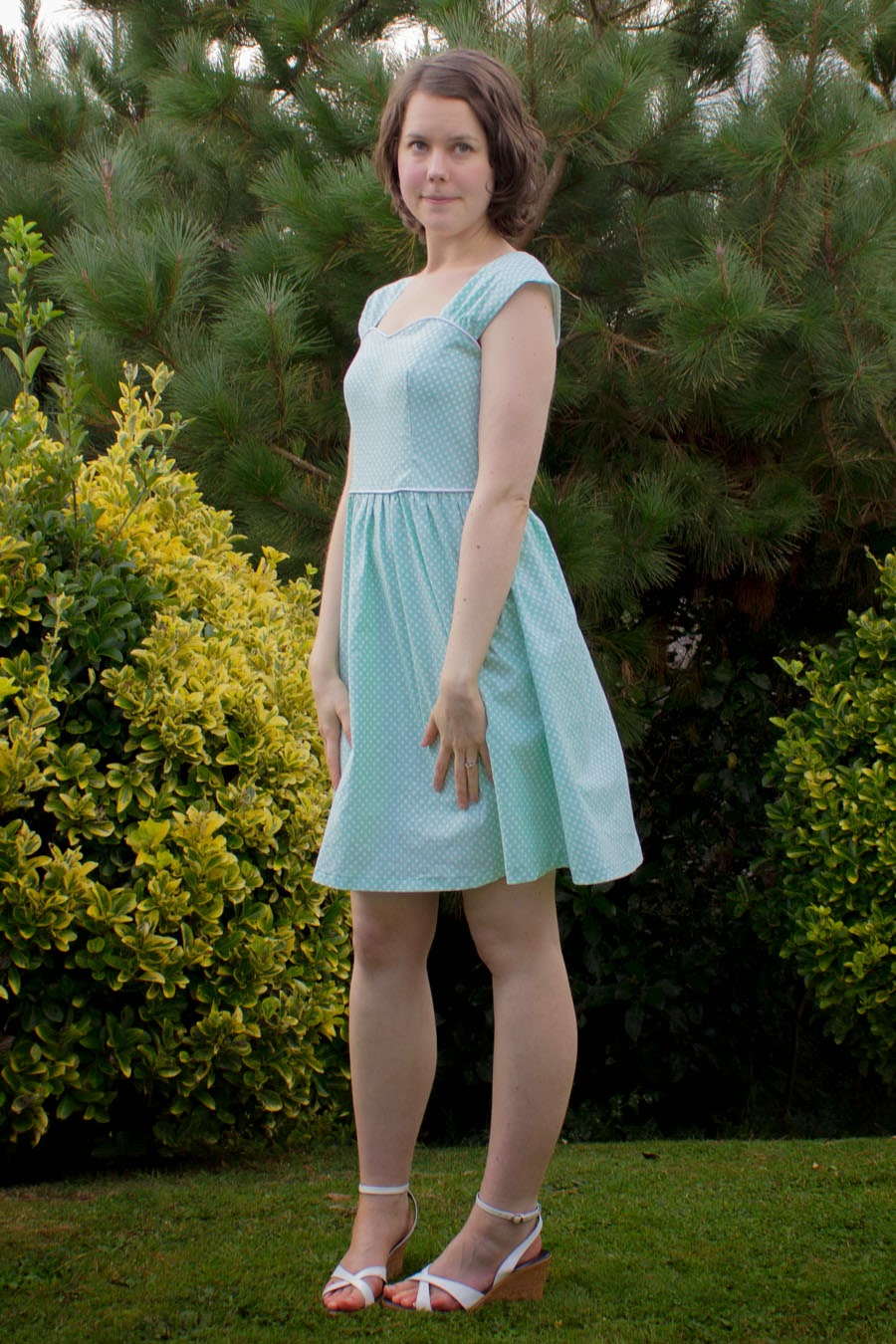 I call this the Maryanne dress in tribute to Maryanne, who runs Made on Marion, blogs, and is generally awesomely skilled and inspirational! I bought this fun cotton from Made on Marion. I don't generally buy quilting cotton for dresses, but I wish I had more cute dresses like this!

Okay, time for a full confession: The lining on the bodice isn't even stitched down in these photos- I didn't have time! Haha! This is why I think I ought to resist sewalongs, so I don't end up sewing shoddily at the last-minute!
However, I did get to put the zip in by hand, even if the bit where the piping meets is slightly dodgy. 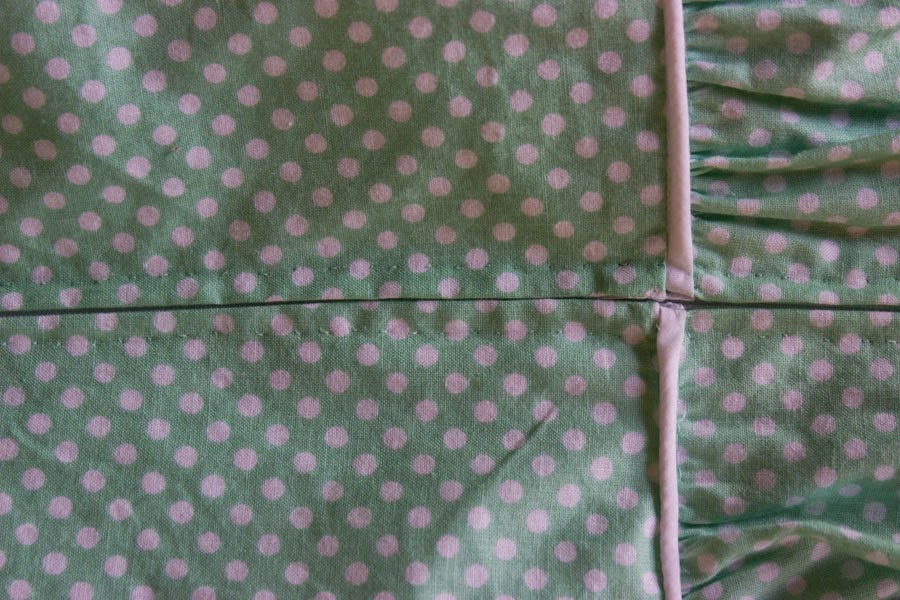 Oh yeah, and piping! It was my first time putting it in- and it looks decent, though I need more practice. Too bad these photos are so bad you can hardly see it, haha!


Omg though, I had a scary moment when I tried it on and realised the piping had made the waist tighter (it may have also been related to all the Easter chocolate I scoffed)! I think the extra bulk, as well as the stabilising effect of the piping reduced the ease. I also wonder if I accidentally eased the waistline into the piping as I sewed it. EEP! I let out the centre back seam as much as possible. I hope it's enough, because you can't just sneakily let out the side seams when the piping is already at a set length. Lesson learned- be very careful with piping!

I was smart enough to prewash the piping though: check how much it shrunk after washing! Now imagine the nightmare of having that shrinkage happen upon first wash of the completed dress!

Okay, let's talk about the fit. Since I worked so hard on getting my Vogue darted bodice to fit, I was hoping I could get away without making a muslin, by comparing the cambie with my fitted bodice. I read about people using their blocks to circumvent the muslin-fitting process so I gave it a try. I won't go into what I did since I fumbled my way through. But the result was it fit perfectly!! Haha, just kidding. It still fit badly. I was quite discouraged...
What did I learn from this process? Flat patterns are complicated beasts currently beyond my full comprehension. I think next time I would just muslin the pattern from scratch instead of trying to get clever.Another mistake I made was trying to get away with the lining-as-muslin trick since I thought there was a chance it'd need barely any adjustment. This really just made the process harder as soft lining fabric isn't suitable for a muslin, and you can't mark, slash and hack with abandon like you can with a proper muslin.So in other words, by trying to save myself time, I made the whole process just as tricky, if not more so. To be fair, it did fit better than I normally get out of the packet, but it was still bad.

So in future, if you see me contemplating trying out a new fitted dress pattern, smack me over the head and tell me to use a tried-and-true!!

Anyway, Maryanne rescued me by offering to help me sort my fitting issues. Sewing friend Joy also helped. Sewing friends are the best! I was having issues with nipply dart points- I took some volume out of the bust with a tuck, but couldn't resolve the nipplies until Maryanne helped me by pinning them in shape on me! Lifesaver! The interesting thing was that everything I'd read said to end them below the apex (and I'd tried and tried to make them work like this), but Maryanne showed me that they needed to go right to the apex. Which shows you that you shouldn't take everything you read in a book/online as gospel!

I probably should have just stuck with the dual bust AND waist darts like previous fitted bodices have used. Just having the one dart naturally makes it a bit more finicky to fit I think. But once I've perfected it, at least the dart sewing will only take half the time?? :P

Oh and I used the skirt from New Look 6799, which is a gathered A-line, because I didn't want the full poof of the gathered rectangle from the official Cambie skirt.

I put myself under last-minute pressure trying to get this finished, which is definitely not my favourite way to sew... though I must say, at least it was a motivating factor!
Anyway, more pics:

All in all, I think this is a successful Cambie, though I did learn a few lessons and muck around a lot. Hopefully I'll make a bunch more in future and they'll be super easy! I'll be playing with piping more though. I've always admired it as a detail, it is so cute!

And congrats to Roisin for her upcoming wedding. Thanks for inspiring us with your amazingly cute dresses!
Posted by Johanna at 10:34