For this dress I wanted to have a play with knit dress pattern McCalls 5974, as I'd had two successes with it in the past. Isn't the blue lovely? It's a spandex cupro blend, according to the guy at the shop! I'd never heard of it before, but it's supposed to be similar to rayon. It's lovely and soft. 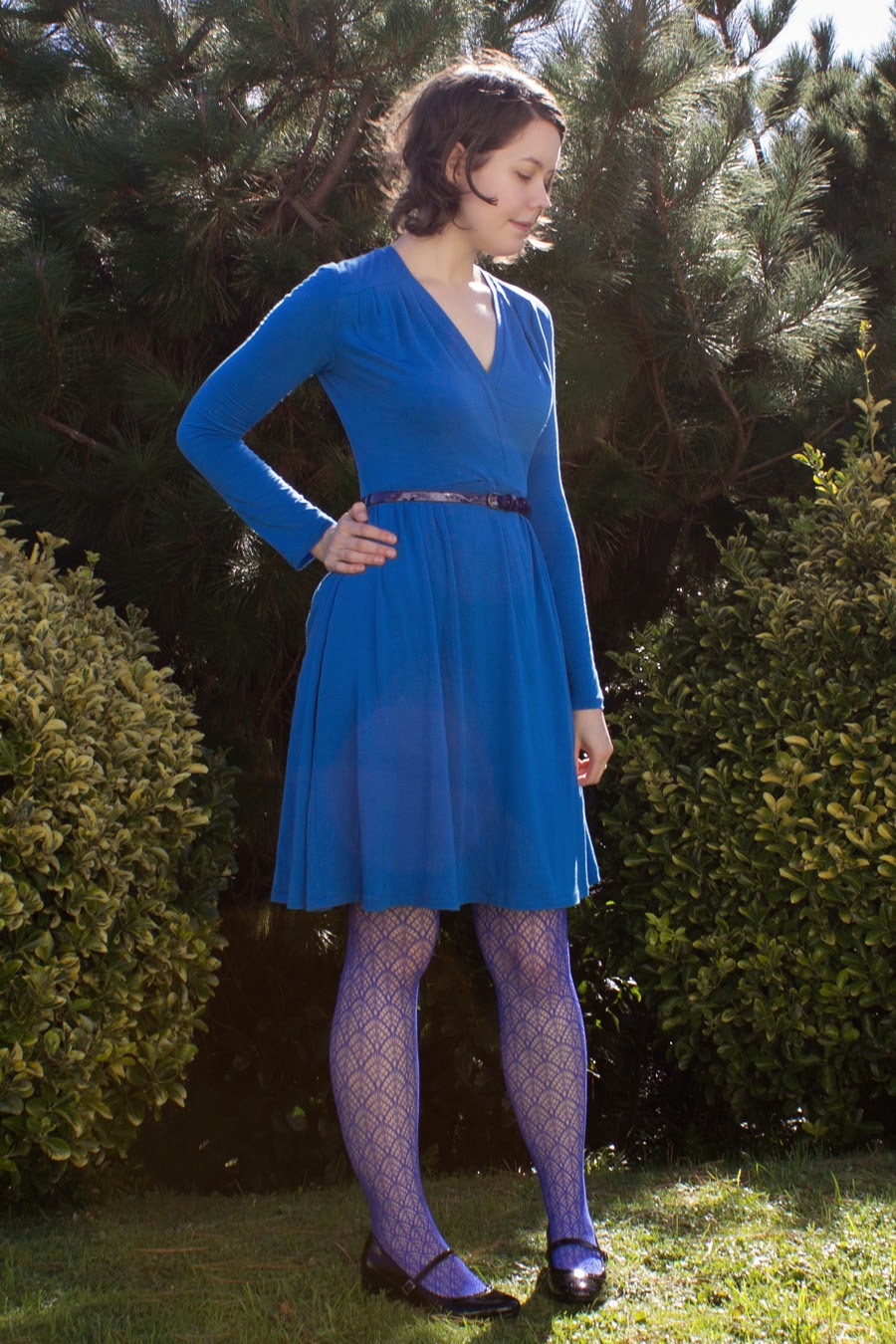 I also put it in the Sew for Victory sewalong because even though the pattern is not vintage 40s I think the style is (totally allowed in the sewalong, I assure you!).Actually the gathered yoke style is similar to the cardigan I knitted for the Knit for Victory 40s knitalong. Gosh, talk about a one trick pony, haha!
I styled it in a modern way though, because I'm not into being period authentic, and this is just for fun. I'm not actually time travelling ;)
This was another of those instances where I think I'll do something simple and it turns out to be much much more complicated than I thought. I essentially redrafted the entire pattern. I created a yoke and rotated the pleats into it (sorta just making it up as I went). I also lengthened the bodice to have a waist seam.

This of course meant redrafting the skirt too. And then when putting it all together there was an infinite amount of fiddling as I tried to make it work to what my vision was. Gah! So much work. So many seams unpicked and resewn!One of the lessons learned was to always cut the pieces bigger than you think you need if you are just making stuff up. Perfectly obvious in hindsight, but that's why my bodice is on the verge of indecently low-cut. And that's also why it has bands, to add a little bit more width. I probably could have crossed them over more but didn't want it too tight...That's also why the waist seam is uneven; I ran out of fabric to make it long enough in the centre front! Tilted waist seams are the bane of my sewing life!
Thankfully wearing it with a belt hides that issue a bit. This belt seems to go with a lot of my stuff!

I also did some invisible hand stitching on the front overlap just to make sure there weren't any wardrobe malfunctions/gaping.
Here is a shot without the belt. I think it's definitely lacking something. So much so that I appear to be falling asleep in the photo! I considered sewing up a self tie-belt. Maybe something to try another time? 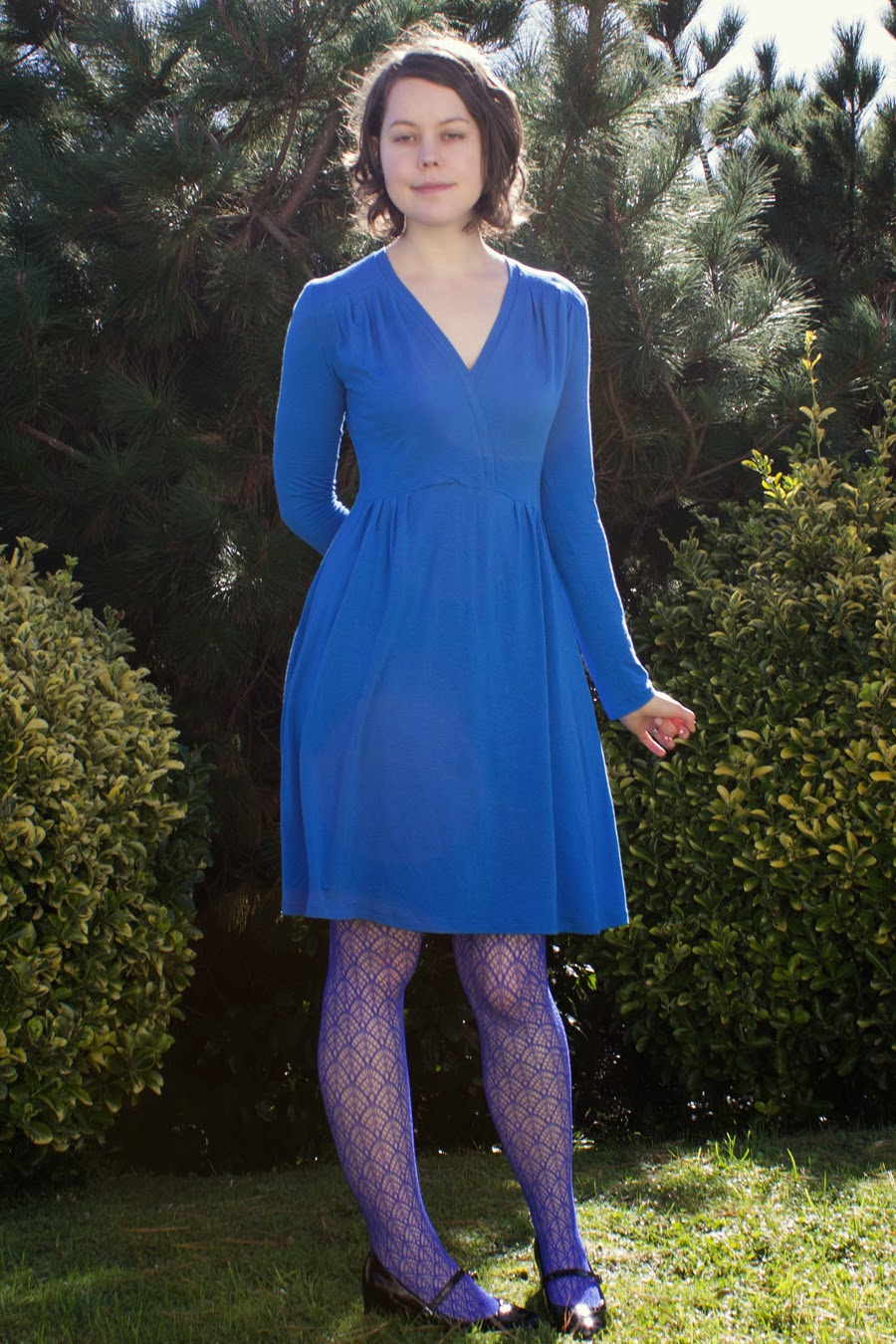 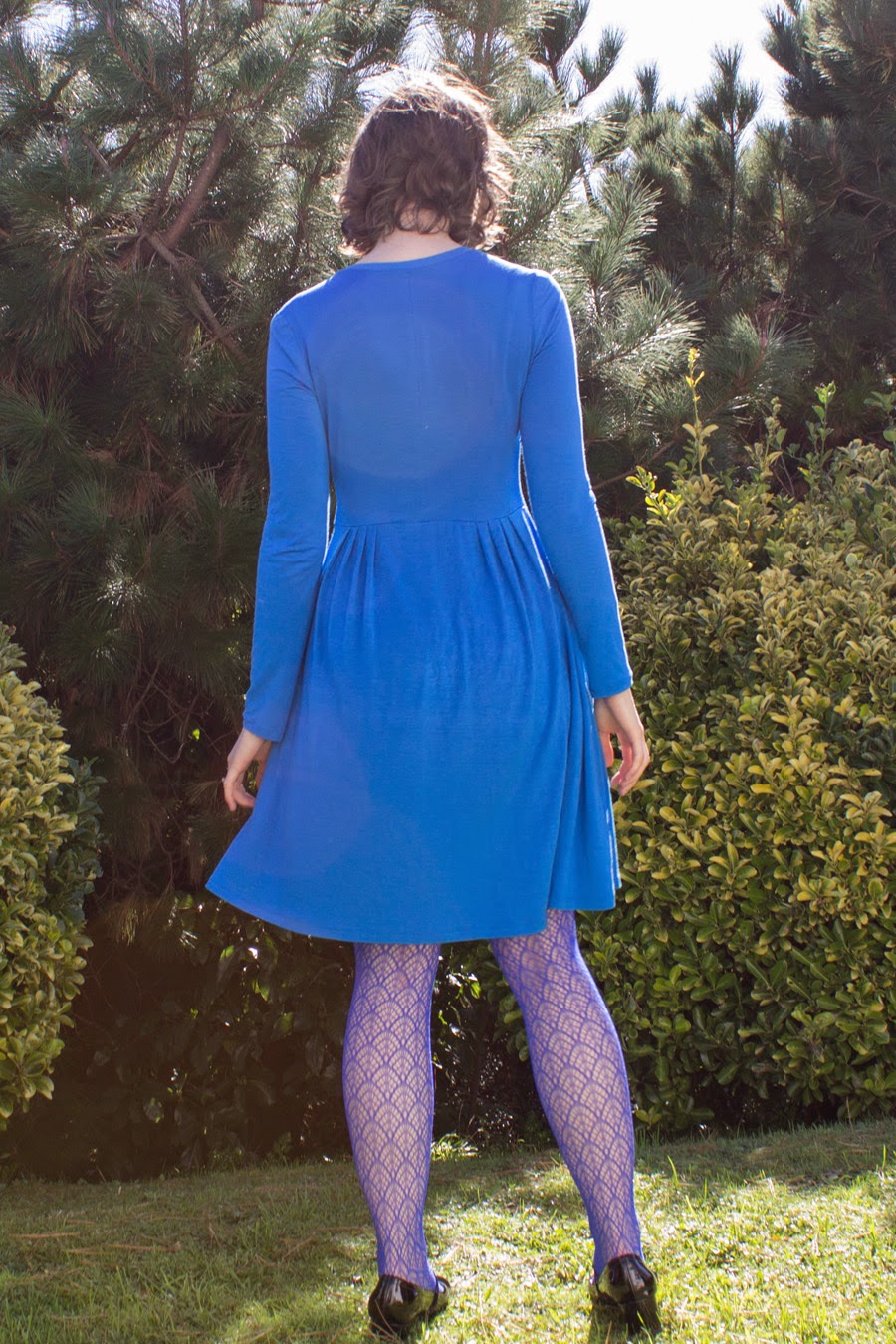 I am not a photographer- here is an out of focus shot because skirt twirlies. 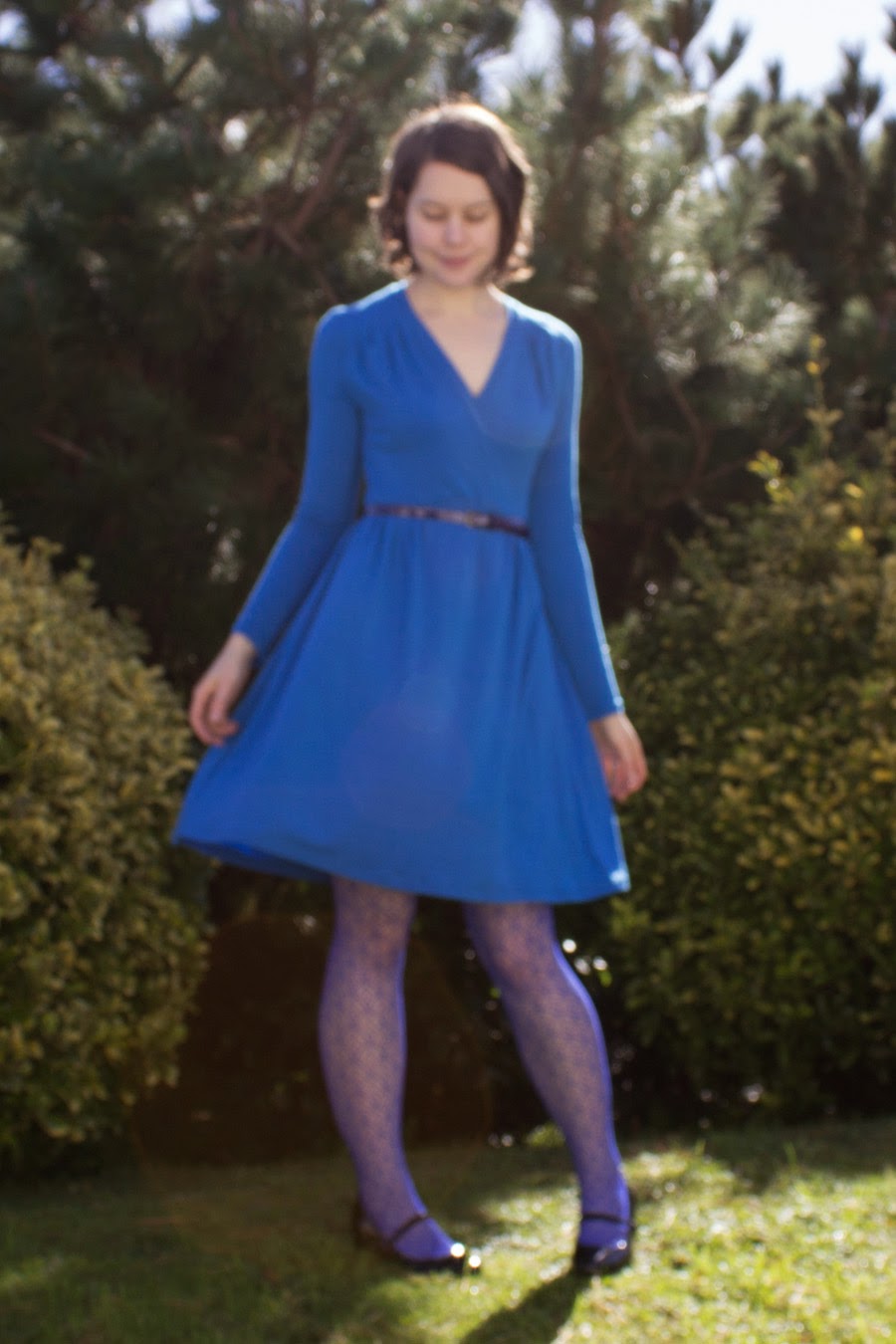 And can I just say YAY, I found something to wear with these cool tights I got for Christmas! 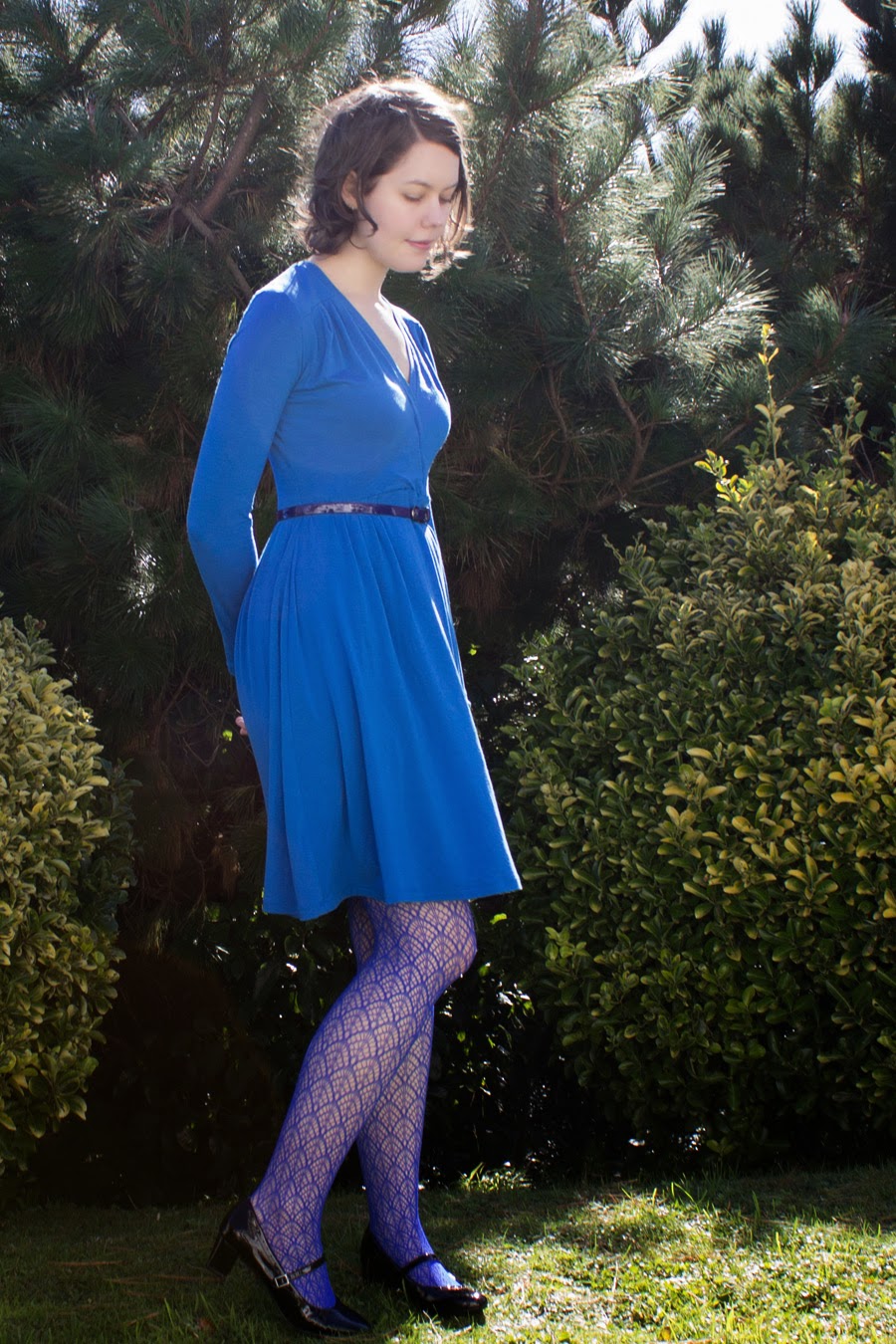 I didn't even know if this would be wearable when done but in the end it is passable. I'm still not sure if I should make another one. On one hand, I quite like the style, and think I could make it better next time. On the other hand there would still be a lot of fiddling! It's probably inevitable I will try another version as this is like a wearable muslin and I want to show this idea who's boss. Would you make another one?
Posted by Johanna at 17:51