Okay, let's just get this out there. I made some knickers, okay?? I trust you all enough to show you my smalls. Except they're not smalls, they're giant "granny panties", lol!
Warning: This post contains a million links, as I ended up vigorously researching undies! Heh! 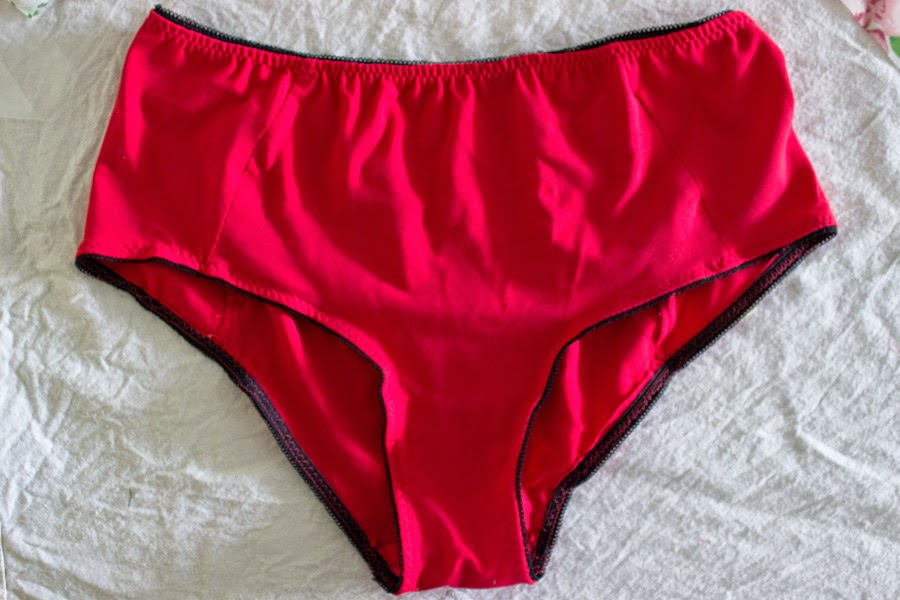 Sophie-Lee hooked me up with the pattern, (the Ohhh Lulu Betty High Waist Panties) which helped me, as the huge amount of undies patterns out there is overwhelming! I'm learning to take one option at a time, instead of looking at too many and going mad with so many choices!

I've been meaning to have a go at making my own undies for ages. Saving money you say? Tell me more! I'm hoping from now on I can scrounge a pair of undies out of each cotton knit garment I make.
But I also want to get some nice combinations of fabric and elastic going, because this plain pair is not too glamorous. It's just my "wearable muslin", and it's a bit fugly, there I said it! I hate the combination of black and red (mostly), but it's what I had.

Can we talk about high-waisted undies for a second? I personally stand strong in my opinion that they are not sexy. They are grandma undies! But I made them up in the original high waist at first to try it out.
Then I laughed and then chopped off the top once I'd confirmed that yes, high-waisted undies are for grandmas. Your opinion may differ of course.

Here is myy dress form (who has no butt/crotch) modelling them for you for a laugh:


Based on the hip measurement, I cut the largest size (I do have a large butt, but surely this sizing would exclude a lot of women if I'm the largest size?). I didn't bother grading, and as expected, it was loose in the waist. But that's okay, I chopped most of it off anyway. I just did this by folding them down to a height I liked while wearing them, and marking with pins before taking them off. I then snugged the seams in around the waist, and also at the bottom of the backside. I'm not sure this is necessary as that extra looseness could be eased in when the elastic is added. But I did it anyway.


These are designed to be made in knits, OR to combine knit fabric on the sides with bias panels of woven fabric in the front and back. This makes the pattern open to lots of variations! Ohhh Lulu's shop on Etsy has some beautiful inspiration on how to make non-fugly versions of underwear.

Also, omg, Ohh Lulu has a tutorial on adding ruffles (albeit to a different pattern but I'm sure it wouldn't be hard to adapt!)... RUFFLES!

If and when I experiment with wovens, they'll probably have less give, so I hope they're not too small. But they're not super-tight when made entirely from knit fabric, so maybe I'll be okay. I thought they looked giant next to my RTW undies, but when I put them on top of each other it was mainly because my me-made undies are still a bit higher-waisted. I might add more to the butt coverage next time, and chop off even more from the top.

Aaand I guess I just revealed I have a pair of bright yellow underwear... Meh, I thought about it and realised that undies are undies. If someone thinks it's scandalous to talk about, that's their problem.

This tutorial from Novita (omg she makes amazing underwear) shows three different kinds of elastic and how to apply them. I used picot elastic. I'd like to try out all the different types of elastic and finishing techniques on underwear! I am very intrigued by fold over elastic. Sandra linked me to Sunshine Shoppe Supply on Etsy which sells some very cute printed fold over elastic! Then I found Elastic By the Yard too. For local Wellingtonians, Made on Marion carries it as well (Buy local, Wellington people!! Sunni had a great post on why this is important)! Oops, didn't I say I was learning not to overwhelm myself with options??
Okay, just one more for New Zealanders: Cordall in Levin sell multitudes of elastic, do mail order, and have great customer service to boot :)

The famous Gertie made this pattern a while back (and has several cute ideas for fabric combinations). And recently I saw Frances of Would I Wear It in Paris made them and raised some good points. There are no notches or lengthen/shorten line. I would add that the instructions are pretty sparse. There are some photos, but no diagrams, so it took me a little bit of extra thinking to figure out. I mean, it wasn't rocket science, but I do like pretty pictures and clear instructions. Of course I discovered there was a sew along on Ohhh Lulu's blog afterwards, but I don't want to have to use a sew along. The instructions should be clear enough.
I liked that the seam allowances were 1cm instead of the standard 1.5. I think that they could even go down to 6mm. Maybe I'll alter them down to 6mm once I get the pattern how I like it, for speedy and accurate assembly!

I did notice mention of the seams being eased into each other. When I chopped off the top, I trued the seams to be the same length.
Looking at it later I saw that the side back seam is a little longer than the back seam. It's just like a princess seam for boobs, which makes sense, as a butt is a curve too! Or at least that's my understanding.

I thought I'd add some of that ease back in so I slashed and spread the pattern piece, and then trued the grainline by folding the pattern piece in half (The grainline is totally a thing, Gertie said to do it). I have NO idea if the slashing and spreading thing is a thing. I have yet to try it out but I plan to make more undies in the future so we'll see! It'll probably be one of those things I can't even tell the difference with.... I'm totally over-thinking undies aren't I?


Anyway, I know this isn't a glamorous make but I'm really happy to open the door on new ways to save money with sewing, and a practical way to use up scraps. It gives me eco-friendly good-feels! Have you made undies or are they waaaay too practical and boring? :)