Garment-Along! Part One: The Dress

This is my post for the Outfit-Along being run by Andi and Lauren, two of my favourite bloggers! It involves knitting something and sewing a dress to match... such a great idea. I'm really glad I made the deadline :)

Plus, it gave me a chance to use my creepy "Lauren" blog post label! Haha! Yes, you have your own tag, ever since we became knitting twins!

I decided to put the two garments in their own posts so they don't get too super-long. You'll see the cardigan soon! (Okay, so you may be thinking "What the heck Jo? You just posted a knitted cardigan!" Don't worry, I'm not a ninja who knits a cardigan in a week, Washington Square just took me a long time to get around to posting! Heh :) )

So I'll start with the dress: La Sylphide by Papercut Patterns. I've made the skirt version before.


I'll admit I was irrationally scared of making the dress version. You may have read about my nightmarish fitting woes, so any new garment is a bit scary for me! However, this time, I successfully used the Vogue 8766 fitted bodice I'd completed at the start of the year, instead of starting from scratch and going to muslin-town unnecessarily.

La Sylphide only has one dart in the front, going from waist to bust, while Vogue 8766 has two (one from waist, and one from side bust). I initally rotated the bust dart into the waist dart to mimic La Sylphide, but remembering the nipply nightmare I had when I did that with my Cambie dress, I changed my mind and kept both darts. If it ain't broke, don't fix it!
So all I needed to do was steal the neckline from La Sylphide, draft on a buttonband to match, and make sure the neck bow was the correct length to match. My method of doing it was very made up, so I won't bother trying to explain, unless you're very interested. It worked, so I suppose it wasn't wrong!
It sounds kinda simple, but it did take me a while, especially since I triple-checked everything out of self-doubt!
Oh, and then I had to make sure the front and back skirt fitted to the front and back bodice.
Anyway it WORKED. Yay, and NO. MUSLIN.


I'd never fitted the sleeve for 8766 though, so that was something new I had to do. I'd completely messed up the armhole of the bodice through my fitting changes, so the sleeve had to be changed too.
Since I'd done a forward shoulder adjustment, I used this tutorial to alter the sleeve. I made up a muslin sleeve and pinned it into the bodice. I wasn't too fussy about the fit, and it seemed good enough so I moved on to the real thing.
I had a look at the two sleeves, and noted 8766 has a much differently-shaped sleeve cap. I think 8766 has a lot more height, and mine definitely sticks up a bit at the cap. I bet La Sylphide's sleeve gives a more subtle gathered effect. UPDATE: Mel of the Curious Kiwi let me know that as drafted La Sylphide has no gathers, oops! Wrong info there. PS She made two adorable ones!

After I cut this out, I had a brief moment of panic when I realised I hadn't considered the print at all! (Though I was smart enough to cut it all out going the same direction). Should I have matched it along the buttonbands at the centre front?? Luckily, the WSBN girls assured me that for such a small print, it didn't matter. And they were right, you don't notice at all.
I also realised, actually, even if it was noticeable, most of the front is obscured by the bow, and the skirt falls into drapey folds so it really doesn't matter!

The print is really busy so the bow kinda gets a bit lost, but you can see it up close. It also looks really good sitting on top of my cardigan, which you'll see in a few days! 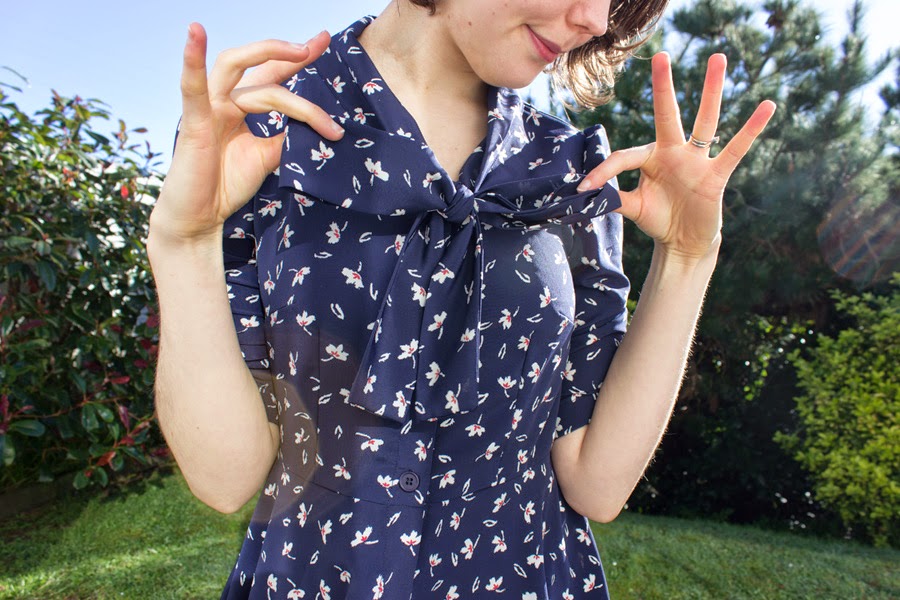 I'm pretty pleased with myself for making this even though I was a bit scared (don't be such a wuss, Jo!). There were a few glitches, like forgetting to alter the sleeve hem to fit the La Sylphide construction- it's turned up 3cm instead of having a narrow hem, so mine puckered as I hadn't shaped the side seams correctly (hard to explain, but you can't just have it taper down to the bottom. You can see in the sleeve pattern pic above, the La Syphide goes back out again so the turn-up matches the sleeve circumference. You can see I've corrected my 8766 sleeve to do this for next time!). I had too much fabric on the sleeve compared to the facing within, so I just bodged a gather on the outer arm and called it a design detail. Heh... 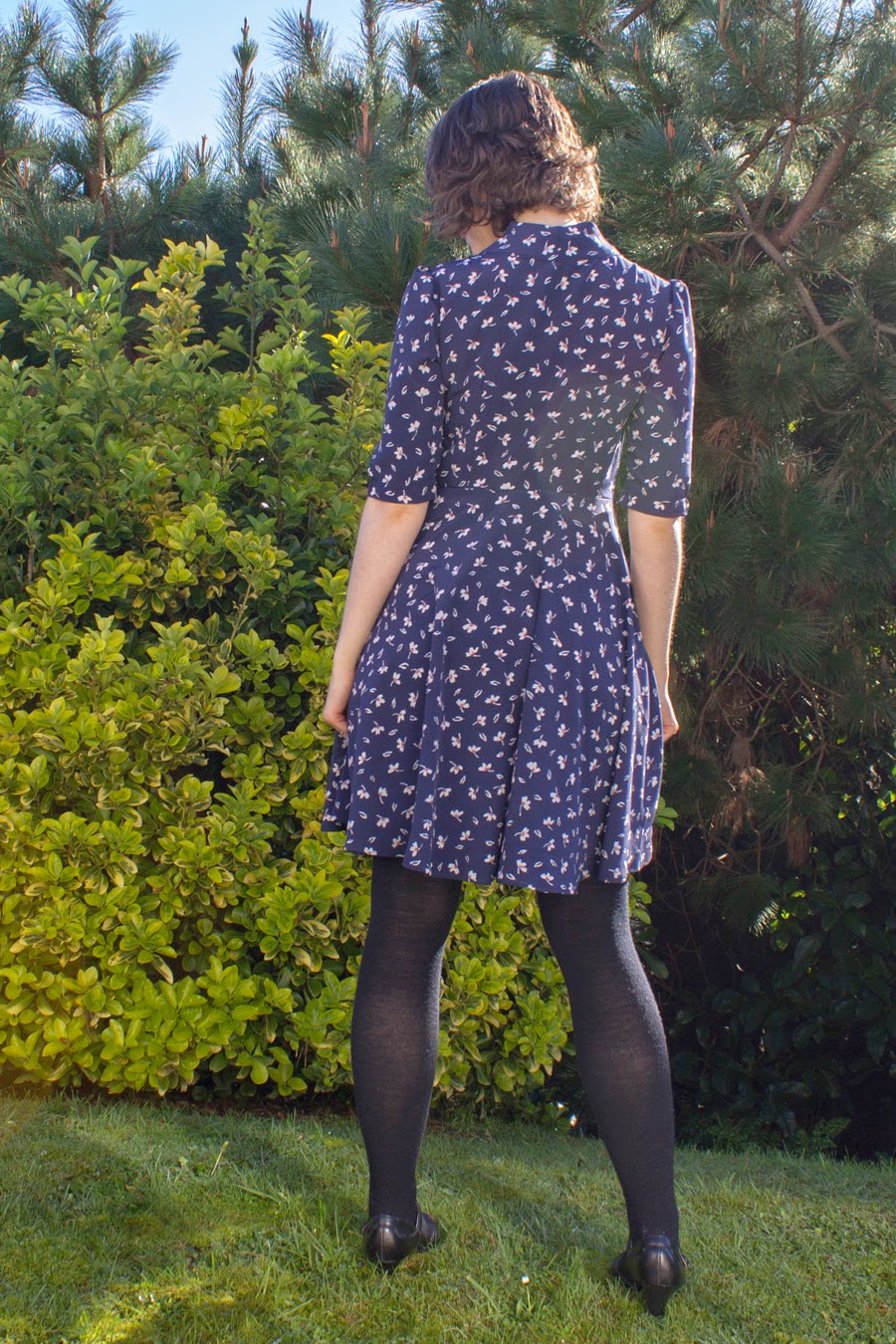 Overall, I'm really pleased with the end result, and would like to make this dress again. There are definitely a few janky bits, like the sleeve-bodging, and the hem... It tried to do that gross diagonal rippling thing when I narrow-hemmed it, just like my Miette skirt did on the bias.

Miraculously though, they all ironed out in this fabric. Hey, I'm certainly not complaining, though I do still want to improve my bias hems so they don't do it at all! This fabric is a polyester, and it didn't like being pressed, so for the bits where it said to press a fold over the interfaced plackets and sleeve interfacing, I had to baste it in place. I also cut it on a single layer, but that's pretty usual for me! I love precision. Especially with slippery fabrics like this. 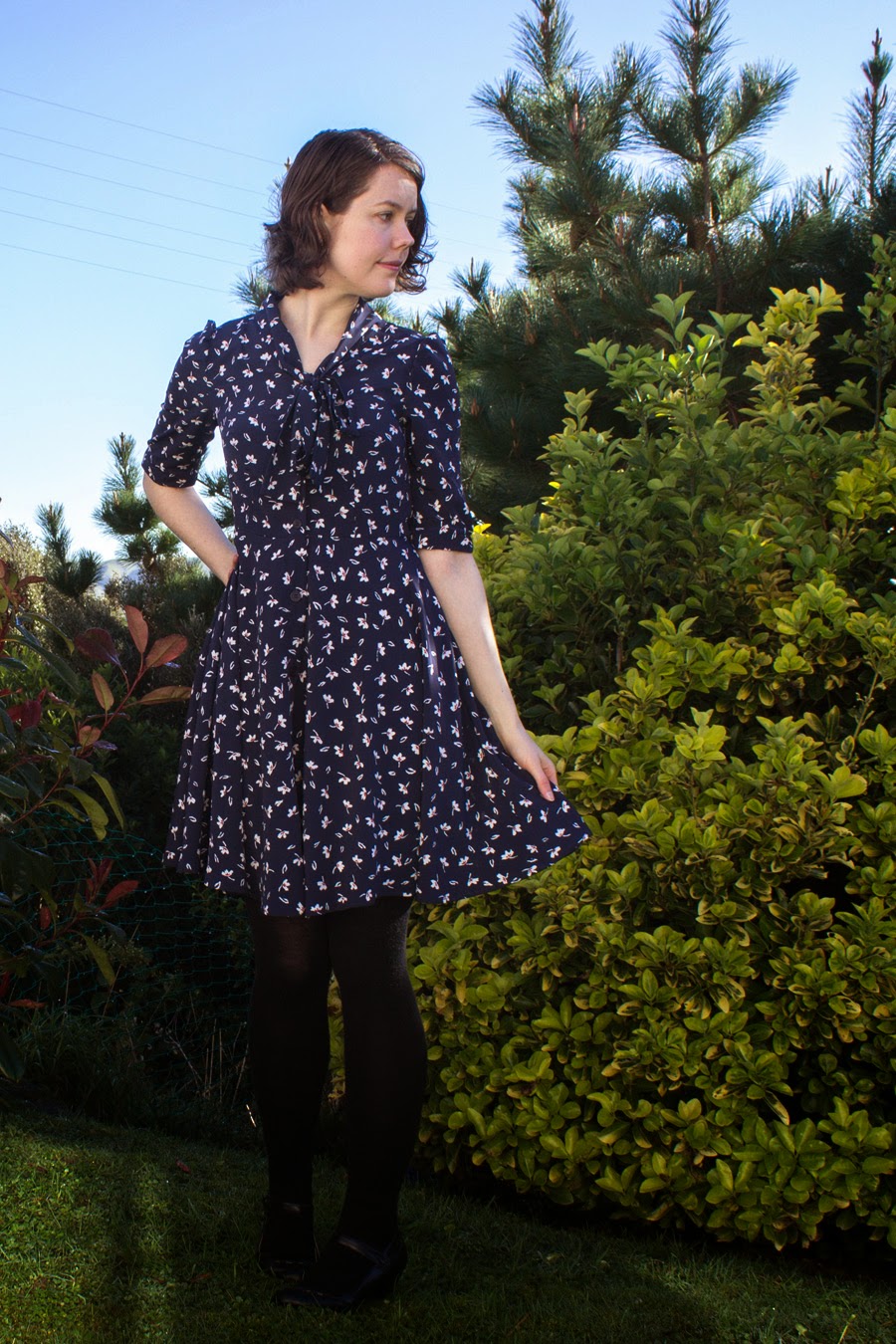 I don't think I'd normally go this short, but got a little over-zealous when evening out the hem. It's still longer than the pattern is drafted though. That thing is SHORT! So I had to add an extra button I believe. Speaking of buttons, I was thinking of being lazy next time and not even making button holes for the bottom few buttons since they're not needed to get the dress on. I could just stitch them right on and make them fakeys! What would YOU do? Would that bug you forever? :P

So overall, I'd call this a win, even though it DID take me forever. I'm think it's a cute design and I love the fabric! Tune in the next few days for how it looks with my new Marion cardigan :)