Well, if you saw my previous post, you'll know I'm doing the Outfit-Along being run by Andi and Lauren, so here is the second part- my cardigan! 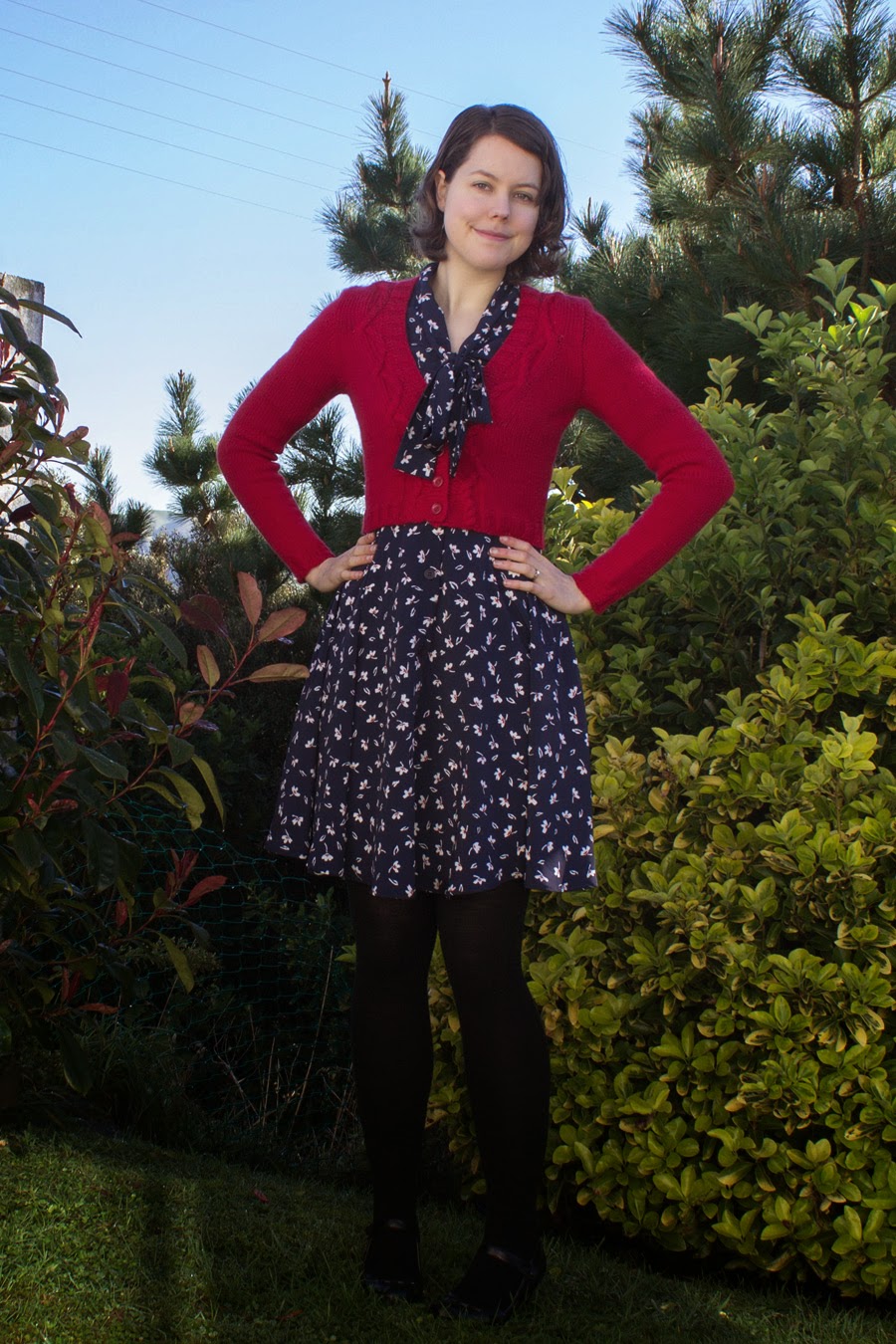 Ahh yes, navy, red and white. Bit of a cliche colour combo but I think it works!
Marion by Andi Satterlund (one of the garment along co-hosts of course!) was a very enjoyable knit, well after I sorted out some gauge glitches. It is designed for 10ply yarn.

As I've mentioned before on this blog,  10 ply is super hard to find in New Zealand. It's all about the 8ply here for some reason, which makes U.S patterns frustrating sometimes as I can't find the 10ply locally!I decided to try out local brand The Wool Company's 8ply as I'd heard it was on the thick side. I had hoped to be able to get a 10ply gauge with it. And I did, on 5mm needles like the pattern said!Raring to go, I started knitting away. But soon I began to realise that the fabric might not be dense enough. I wanted to make sure my cardigan was nice and opaque!So I swatched again. It was so hard to be patient, because I was excited to be part of the garment-along!Knowing my stitches would be smaller, I readied myself to do some maths. It wasn't too hard though, as it's mainly a stocking stitch cardigan! I essentially just knitted a size up. 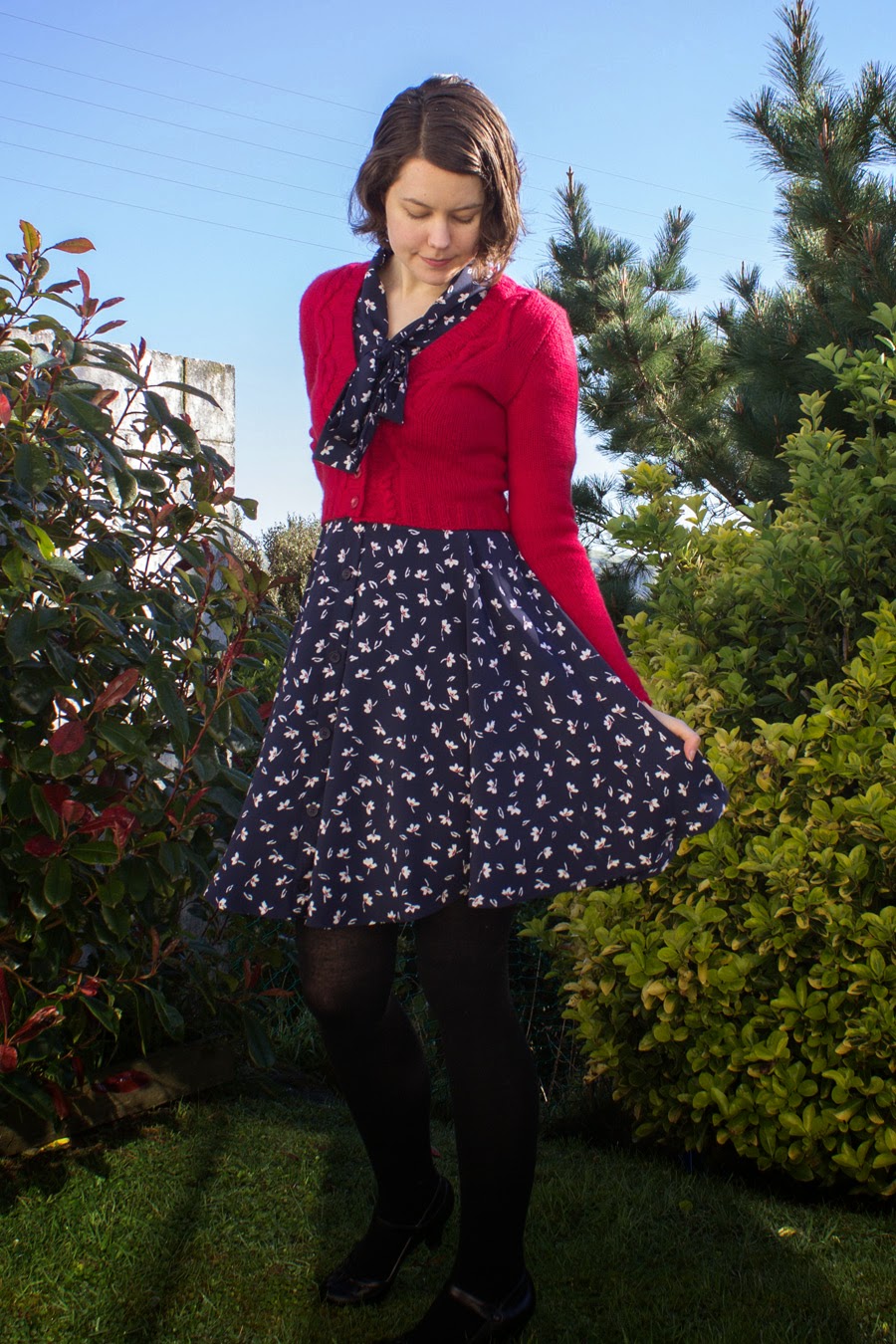 I had trouble with my first sleeve though. I ended up ripping it out when I was 3/4 done! Ugh! I just decided it was too tight! That's what happens when you play around with gauge. Oops! I did the next size up again and they were fine. I also wonder if it was because my gauge in the round may have been tighter than in the flat.My short rows also looked much better on the second go- the first time I had picked up my wraps. But they ended up looking quite loose and ugly. The second time I didn't pick them up and left the wraps sitting there. It looks so much tidier!I also dug out my DPNs instead of using magic loop, which I think helped even out my tension a bit. I'm converted to DPNs now, I think!

Here is a picture of the work in progress. You can see that I thought I'd be extra clever and put another buttonhole in, like the larger sizes have. WHY? So silly. At that point of the V, you'd never button it up. You can already see the button below that is straining. So I chopped that button off and did a janky sew-up job on the button hole. Heh. 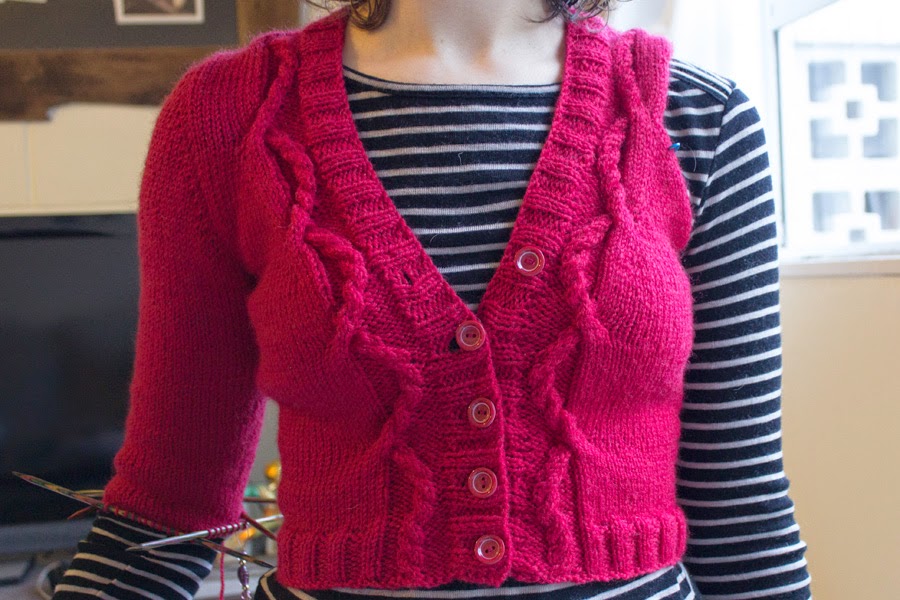 I knitted it with a little more negative ease than the pattern recommends (hers is 2-3" and I think my calculation had mine sitting at about 3.75" negative ease). Why? Stubbornness... for some reason I didn't want to modify the stitch count at the bust for the size I'd chosen. It really makes no sense since I mod everything, and stocking stitch is SUPER easy to modify.
Also, I modded the stitch count at the waist since I'm not as curvy. So there are less decreases going to the waist.
One more mod I made was because my row gauge was smaller too, I didn't follow the pattern for length either. I just had to make sure my cables ended on the right row to merge into the ribbing as they're supposed to.

I do think though, I would make it longer next time. I'm sort of coming to the conclusion that I like my cropped cardigans to sit just below the waist, not on it. It just makes it easier to layer with skirts, as that way I don't have to worry about them scooting above the waistband and looking silly! Lauren's one sits slightly below the waist and looks great! And hmmm, hers is red too... I promise I'm not a creepy copycat, it's coincidence, lol! 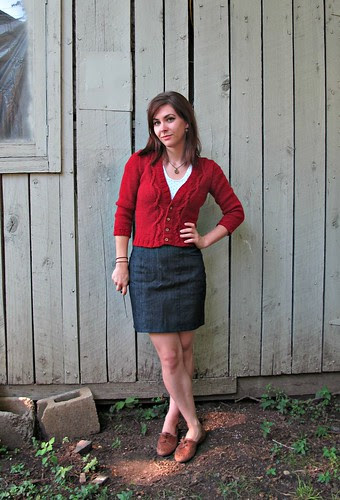 UMM, okay, I just realised she modelled hers with a combo of red, navy and white too. Maybe I'm totally a subconscious creep! Agh! Haha!

Anyway, to fix the gaping buttonband, I stabilised it with ribbon (it was thinner than ideal, but it works.). I've done this before so didn't need the tutorial, but check out Lauren's tutorial on this, it's really well put-together! Also, I bought enough ribbon for both sides of the button band, but was totally lazy and only did the side that sits on top, figuring the underside is hidden, so maybe it doesn't matter... Logically, this makes sense to me, so I may continue my lazy ways in future. Perhaps a comparison is in order sometime!
You'll have to trust me that it helped the gaping though- you can't even see it under the bow on the dress! Whoops :D


A design detail I noticed was on the button band. At the hem edge, it has garter stitch instead of the usual rib the at the bottom two stitches. (Only on the band that sits on top though). The garter stitch mimics the look of the rib, but doesn't curl like normal rib! Very clever! At least that what I assume the function of that idea is!


I should have made my buttonholes in the ribbon longer though, getting the buttons through them is a bit of a pain. Oops!


I really love the top-down construction of this pattern. Andi is really great at designing knits like this, and I really enjoy it! I like knowing I have insurance for running out of yarn (i.e I can shorten it if I'm desperate!), and that I can try on as I go! Oh, and I lengthened my sleeves to full length instead of the 3/4 the pattern is designed for. 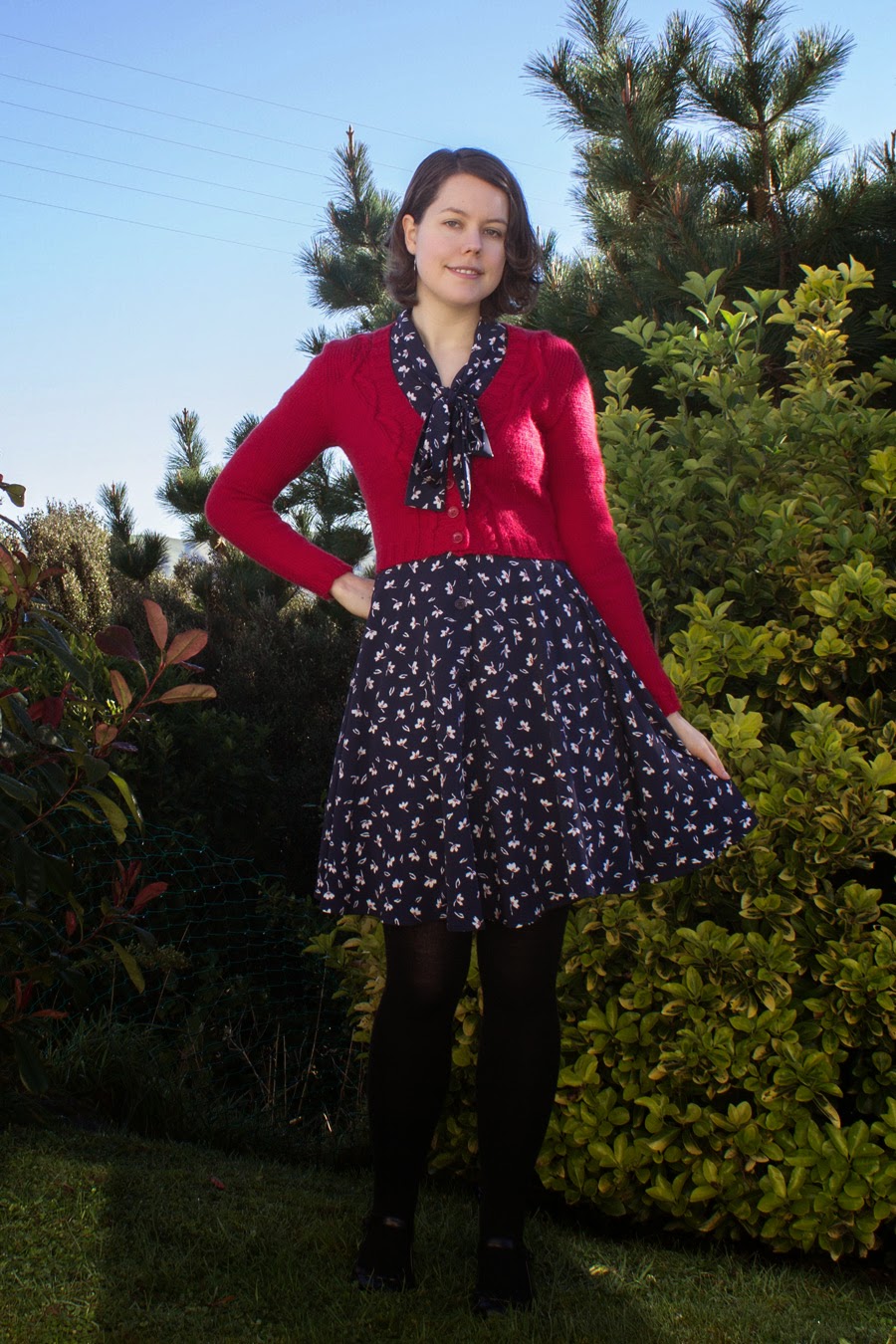 I've wanted to make this darling cardigan ever since I set eyes on it so I'm really happy to have it done! My Ravelry notes are here (and suprisingly bare tbh!). Thanks Andi and Lauren for doing such a great job hosting, and I look forward to seeing all the other awesome outfits! :D
Posted by Johanna at 06:47