I really like my corduroy Beignet; it's one of the best things I've made so far, I think. I really worked hard on the fit (two muslins/toiles I believe) and aimed to make plenty more! But it wasn't easy, and I made loads of mistakes on it.

This Beignet was also fraught with difficulty!
I was pretty convinced I'd hate it the whole time I was making it, but surprisingly, I think I can make it work!
This the basic picture below: I wanted to show you the most boring style so I could explain this skirt! 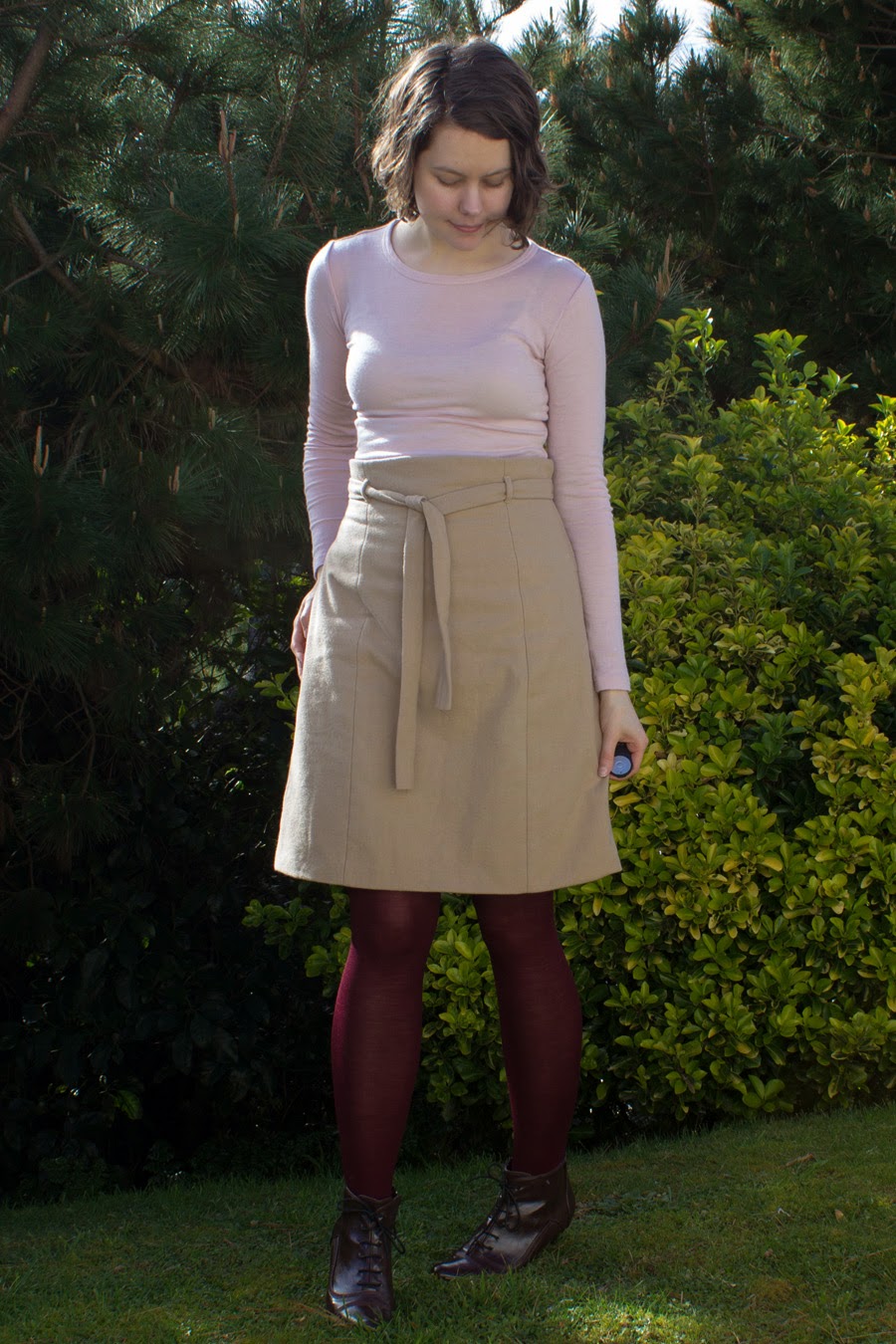 You may notice a few things from this picture!
1) I HAVE A REMOTE! AGGGHHH! How come I didn't do this earlier??? I used to make the camera take bursts of 10 on a timer, which made sorting the pictures afterwards a nightmare. So if you see me holding something, that's what it is. I love it.

2) The skirt is super hmm...what's the word? Basic! Boring? And styled in this basic way I think it is really average. But sometimes "boring" is a great base for fun combinations!

3) I'm really branching out on colour. I committed to trying to expand my colour palette a while back and this is a foray into warm tones. It's also light, and I tend to stick to darker tones on my bottom half.


4) The belt is not tied up properly. I made the belt up but it's far too bulky. I didn't even bother finishing it because I knew I'd never wear it!

5) The thing about the fabric is that even though it's not heavy, it is quite bulky. I don't even know if it's meant to be for a skirt like this. I'm wondering if it is supposed to be a coating? I don't know enough about fabric yet!
And for someone like me who is hippy, I was very concerned it would exaggerate it badly and I'd look giant on the bottom! This basic styling doesn't help that, so let's move onto something better. 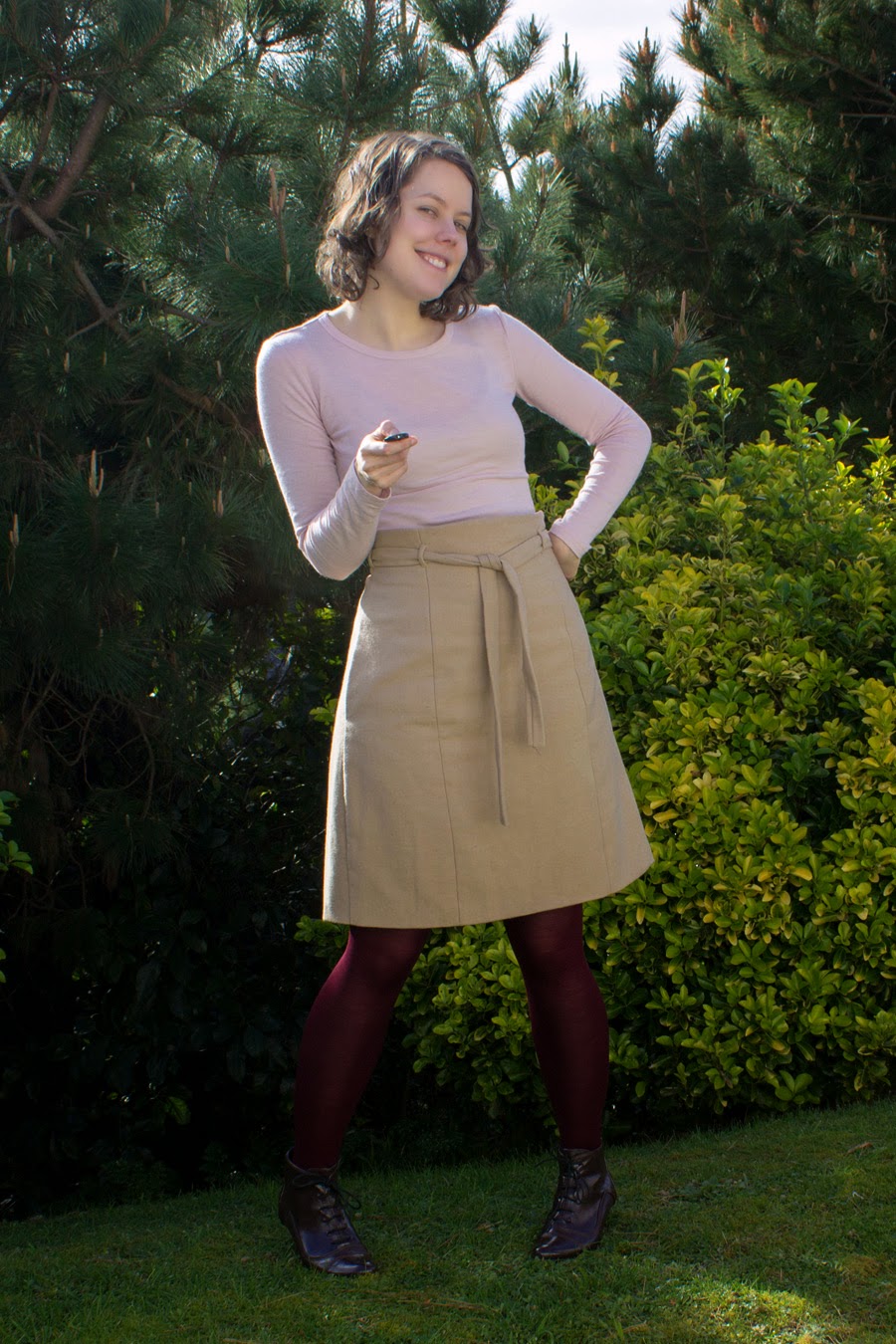 Okay, so isn't this SO MUCH better? Adding a proper belt (which defines the waist), and adding some interest on the top half, really balances out the figure, and adds some much-needed colour contrast, in my opinion. 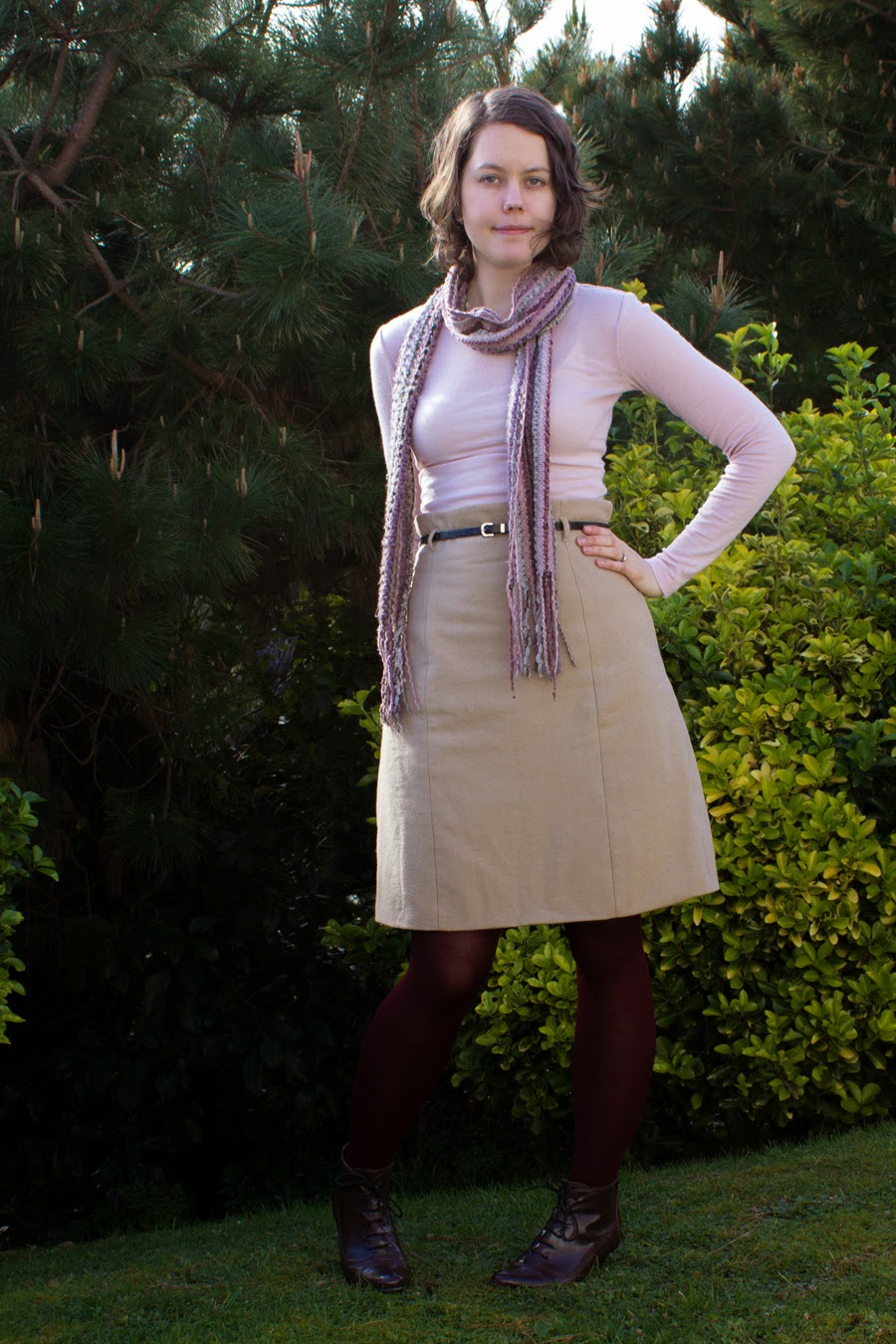 So yeah, I was pretty much afraid this would be unwearable the whole time I was making it!
Fabric choice is one of the trickiest things I think. Pairing the correct fabric to the pattern is still a challenge to me and can really make or break the garment.
I got this wool second hand, and decided I wanted a Beignet. This was heavily inspired by Andrea, one of my sewing idols, who did something similar! I also copied her by removing the buttons and going for a zip closure instead.

However, I thought the fabric had too much drape; I liked the stiffness of my corduroy skirt, as it makes the A-line silhouette.

SO, I decided to underline it with thin cotton. I often read about underlining with silk organza but I was too cheap to go that route. I think it would have been better though! It would add the stiffness with no bulk.

So I painstakingly cut all the panels twice, in wool AND cotton, and hand-basted them together. And of course there's a lining too!
This was just one of those projects that dragged on, and the whole time, I was half-convinced it'd be unwearable. So, not a good combo.

I was paranoid that working with the bulky fabric would make it too small. I was also concerned the cotton would restrict the give in the garment.  Eep! I did sew sliiiightly smaller seam allowances to allow for it. It does fit. Phew!

Here I styled it up with my Blackberry Cardigan. The raised waistline on the skirt looks a little lumpy underneath but I don't mind. 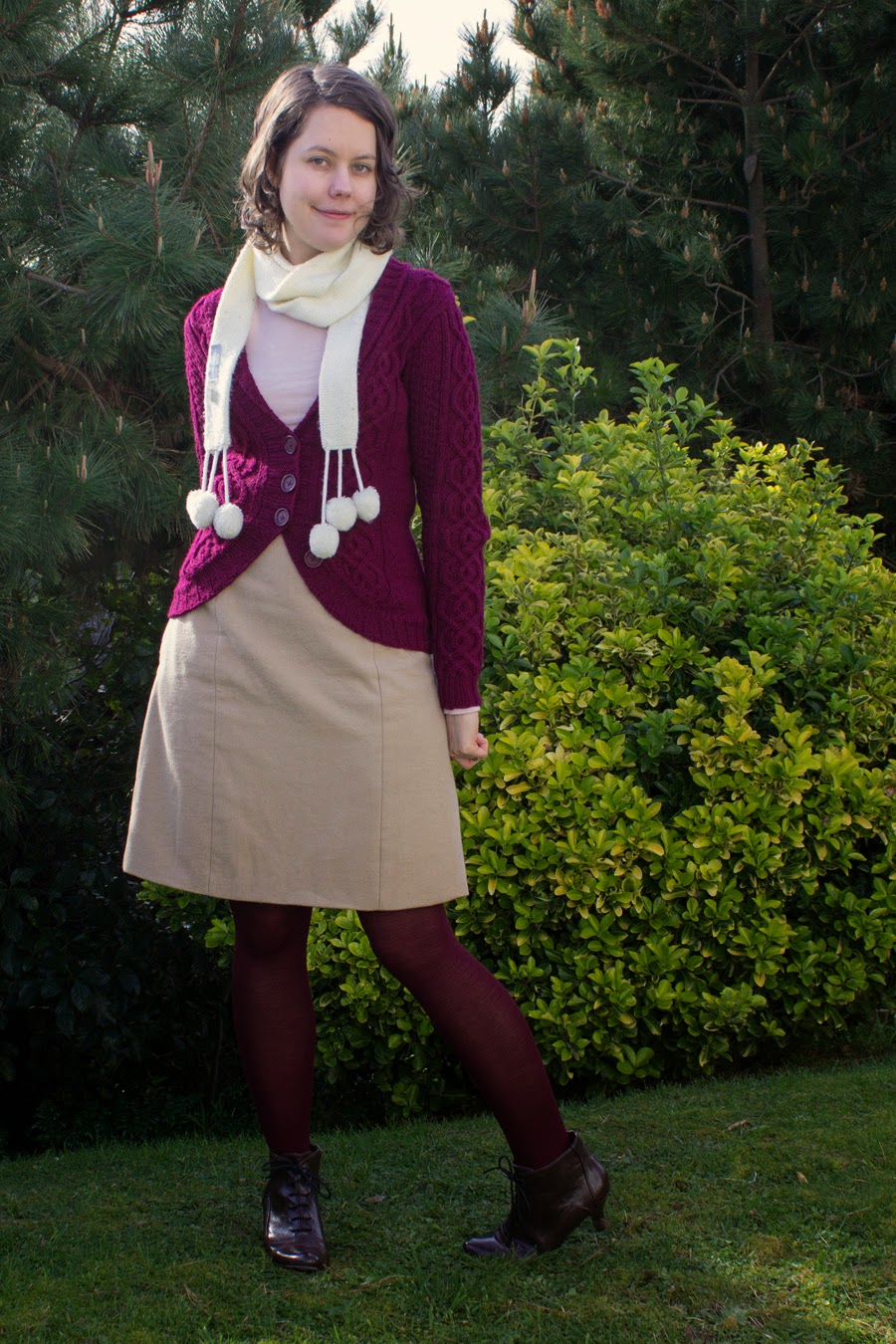 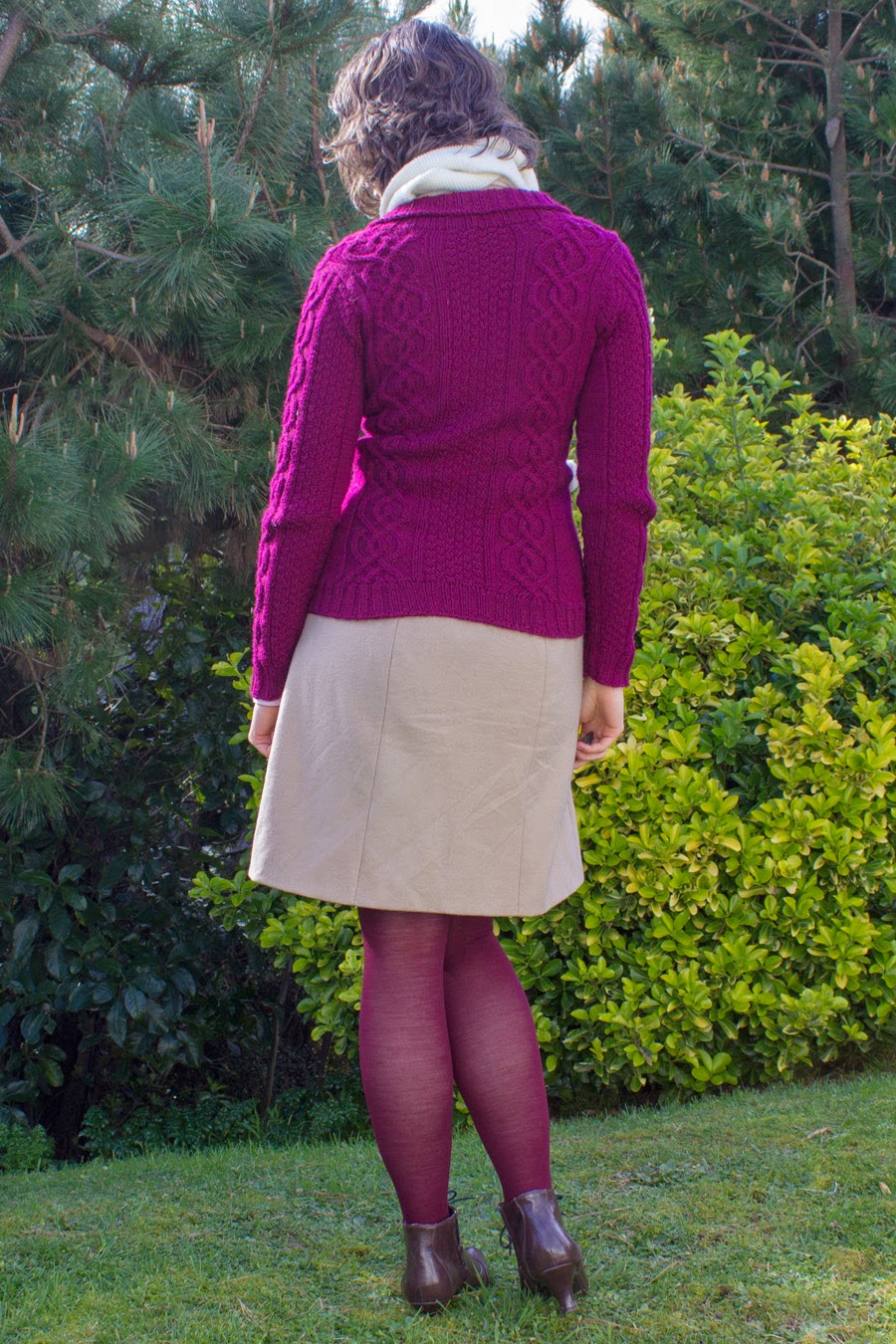 So, the POCKET. ugh. I should have paid more attention to Andrea's awesome version. She smartly added a centre back seam and put the zip in there. But I took it upon myself to figure out how to put a pocket on the side seam with a zip.
It didn't go well.First I spent ages looking online for help on how to do it.Then, I spent ages using tutorials to put the dang thing in.I then decided it was hideous and after a period of mourning for my time and effort, decided to take it out and only have one pocket. Ugh, ugh, ugh.I bet there's a better way to put it in than what I did, but I am in no mood to revisit this technique. Maybe one day, if I'm making something like a gathered skirt, with pockets made of self fabric. That would camouflage a lot better.

Even now, just thinking of it hurts. Construction stuff flips my brain out lol.


Beignet I still love you and I am committing to trying again until I can make you without a hardship!

Some pics of the guts:
I hand picked the zip (yeah, TWICE after that pocket fiasco ruined my first attempt!). I used a lapped application, though I never know how to deal with the facings/linings with lapped zips. They don't line up right anymore because of the lap so I just fudge it....Hmm. 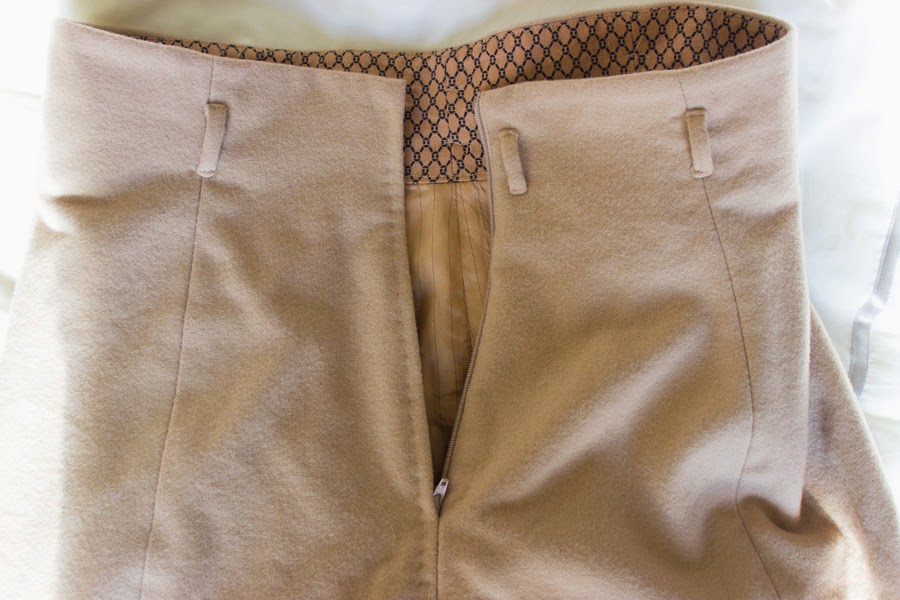 Overall, with all the challenges, I'm quite surprised to like the result. Learning, always learning. Have you guys ever underlined? What do you think of the fabric choice? I'd better queue up another Beignet....

Here, have a pic of me looking crazy. Yay remotes! 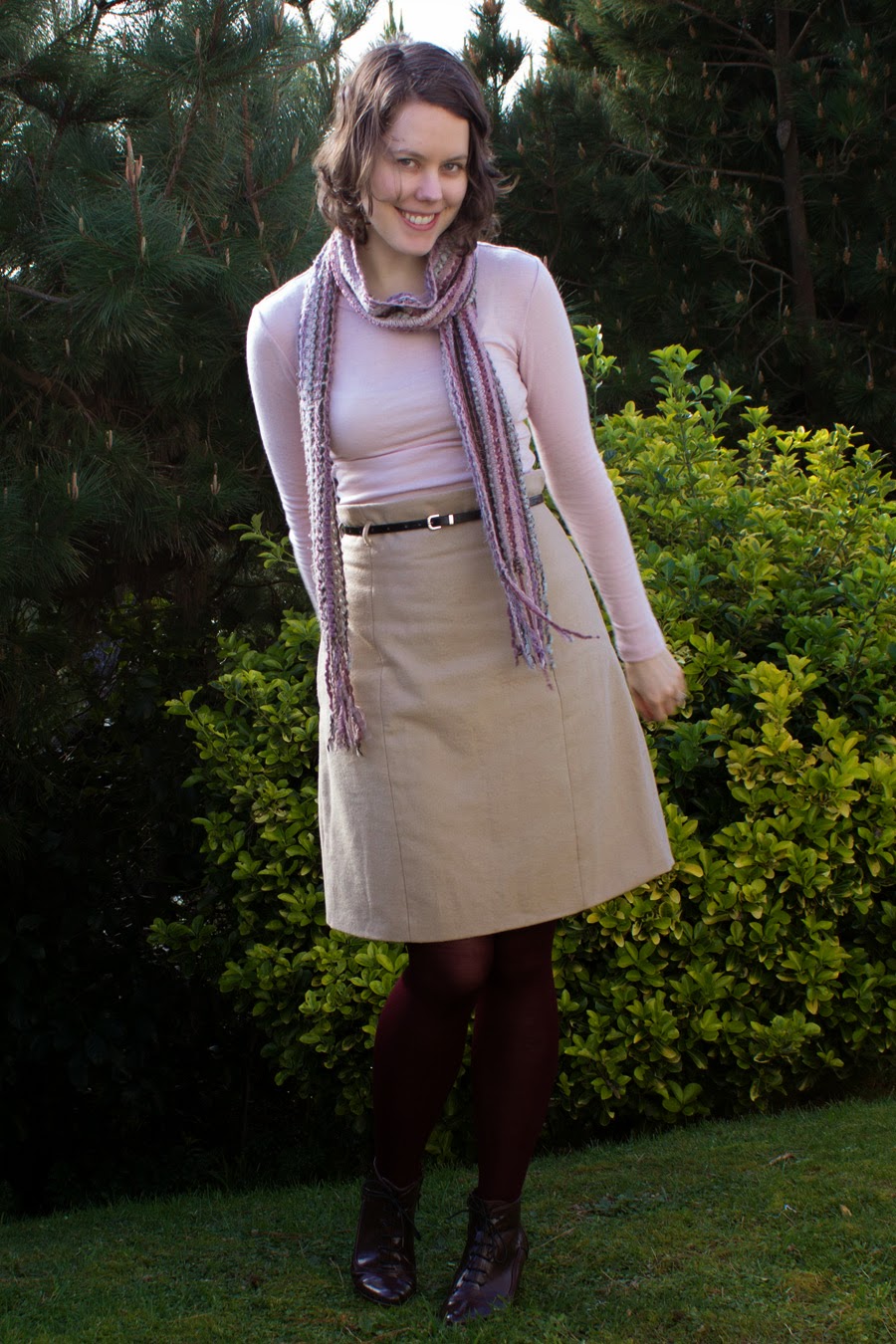