Completed: The "See You There" Hoodie

Hi! I knitted another cardigan :) The pattern is See You There by Joji Locatelli and ooh! It's my first hoodie! :D
I'm wearing it with the dress I just blogged. Sorry for the lack of variety, haha :D 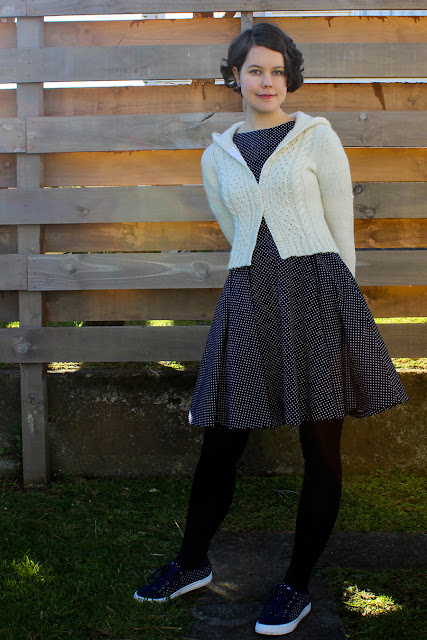 And YAY, I finally conquered my cursed yarn! This was the THIRD project I'd attempted with this yarn. I had to frog the first two projects I started with it. They were both for 8ply, which this yarn apparently is, but it's a very heavy 8ply. I eventually had to conclude it was best for a 10ply project! Since I love my negative ease, I was able to use the slightly smaller gauge I obtained to size down my garment. 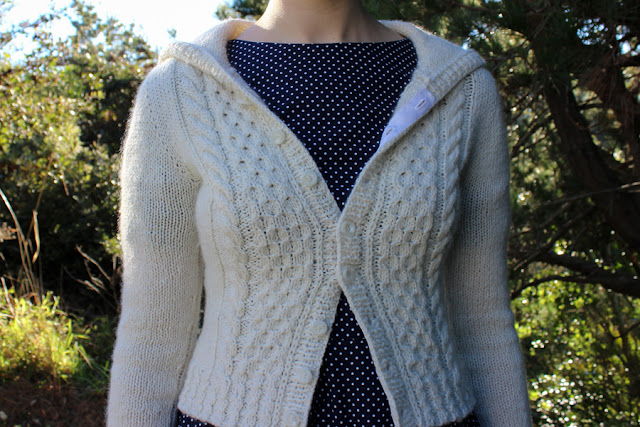 I've done the "smaller gauge" trick quite a few times now; I simply find how much smaller my gauge is than the pattern's gauge (e.g my gauge was 85% as big as the pattern gauge), and then I see which size of the pattern would fit my needs if it was 85% as big. Does that make sense?
In this example, I found that the pattern size with a 35.5" bust, at 85% as big, would be 30.2", which would fit my 33" bust with about 3" of negative ease.

It's kind of a lazy way to do it but so far it has worked for me. Of course, from there I also end up adding custom waist shaping and hip shaping, but this way works to give me a good fit in the shoulders and bust.


The shoulders on this pattern are cool! It's a construction method I've never used before, called the contiguous method. It involves lots and lots of markers, and increasing at those specific points.
It's done top down, and through the increases, forms shoulders (no seams required) and also creates the top of the sleeves! They mimic the look of set-in sleeves, but require no seaming or picking up of stitches. So it's very clever indeed.
It makes the start of the pattern quite a doozy to follow, but once it's all established it's pretty plain sailing! 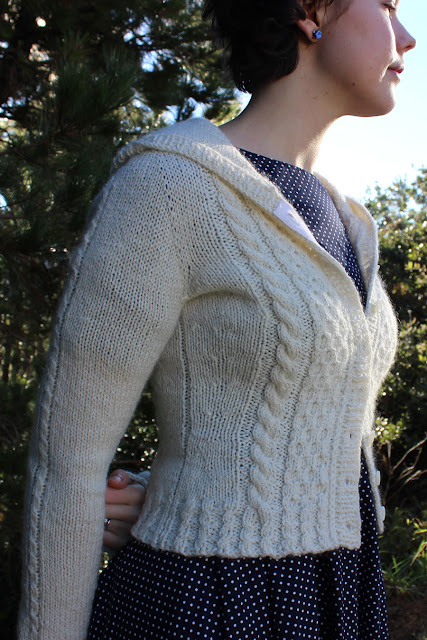 You can see the fake armhole seam here. It sits a little wider than a traditional armhole does, which doesn't bother me. Maybe it's the size I chose, but I think it sits similarly on the model too. Also lol at my lumpy arm due to the dress sleeve underneath it!


One of the BEST things I learned while making this was how to cable without a cable needle. I'd read about it ages ago, but never got around to teaching myself until now. OMG, worth it! It suits me very well, as I mainly knit on the bus; minimising fuss, and droppable objects, is very useful. Here's the link to the tutorial! It's a little fiddly at first, but not too bad once you get the hang of it! :) 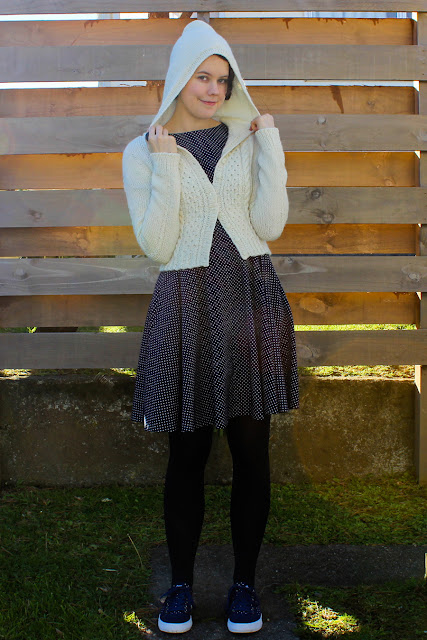 Oh and did I mention hood?? Fun! 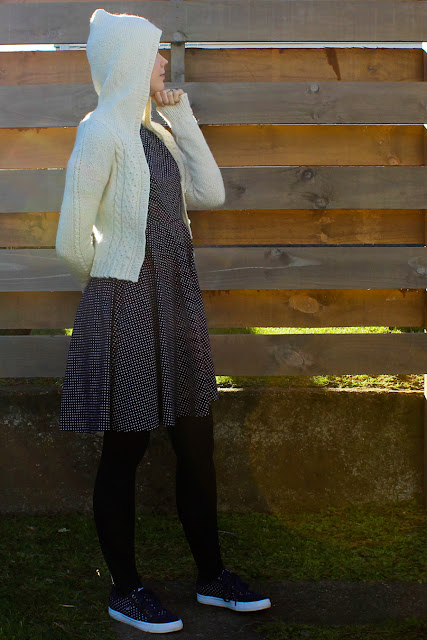 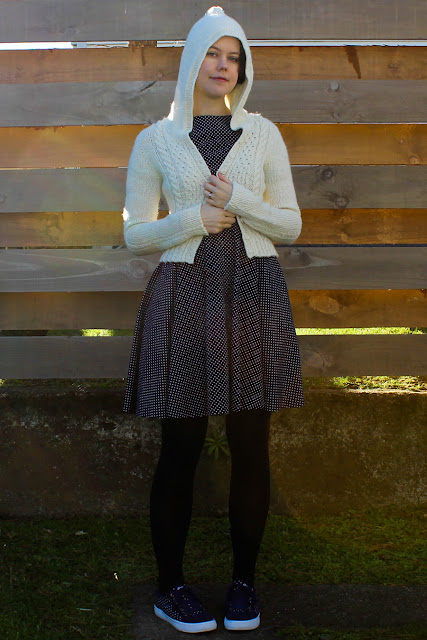 As usual, I changed the length of the pattern to my own needs. I've been trying to find the elusive perfect length for cardigans. I like them cropped to below the waist, which looks good with skirts and dresses.
Since customising the length messes up button band instructions, I ended up going to my trusty formula of 2 stitches for every 3 along vertical edges. Another way to make sure this will work is to divide the stitches per inch by the rows per inch- that gives you the exact ratio (which in my experience so far is usually about .66 to .75)


Speaking of getting the perfect length, SLEEVES! Argh, they always trip me up. This is probably at least the 4th time I've made my sleeves too long. Because blocking often lengthens my knits, it is quite unpredictable what length they will decide to become. Clearly I need to get more scientific here. They were fine before blocking, but when I tried them on afterwards, yep, too long!   However, as they were knit from the top down, I knew I would be able to rip the cuffs back a little. I was totally ready to do it and then decided it was actually fine. After all, I figure the hood is a bit casual so I can get away with slightly long sleeves, as that suits a casual look just fine. Or so I'm telling myself :) 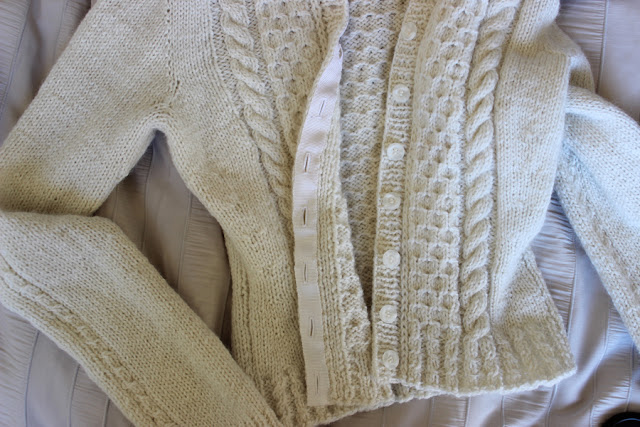 I decided to reinforce the button band like a good girl (sometimes I've been too lazy, oops), using ribbon. I hand-stitched it on after I sewed machine button-holes in it. Nothing new here for me, but anyone curious should check out Lladybird's tutorial :) Being a little lazy though, I only reinforced the top of the button band, haha. I mean, it's the only part that shows right?? Disgraceful.

The cream colour I'm not absolutely sure about, but I'm glad to have used it. I don't have many light-coloured wintery garments to match this, but hopefully I will in the future? We shall see. It seems that most stores insist on stocking dreary dark garments for winter (as if it's not already depressing enough). Aren't we lucky that we have more control over what we wear?

And if I'm going to end on a smug note like that, here's a picture of me looking smug. 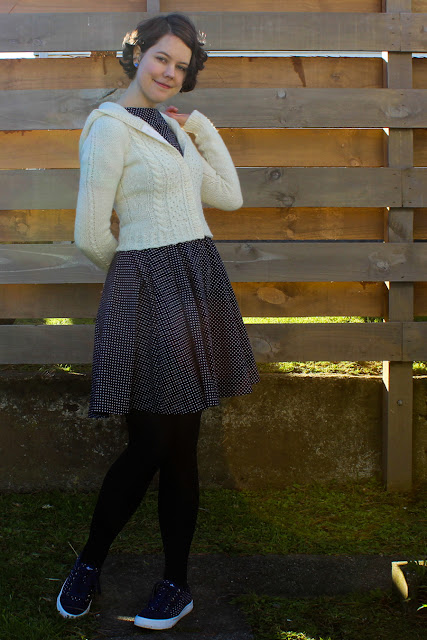 Do you guys like to wear dark clothes in the winter? Or should we all revolt and wear brights? :)
Posted by Johanna at 16:31