Hi guys! I finally finished the dress I made for the outfit-along 2015! It goes really well with the cardigan part of the outfit, but I'll save that for my next blog post since I have lots to say ;) 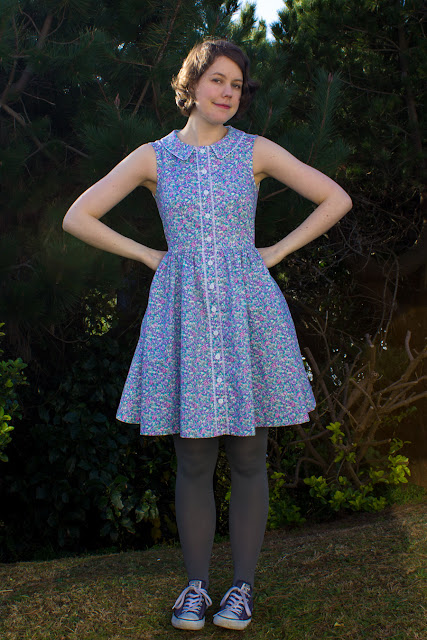 So let's talk about how this is a cuteness overload. I got given this fabric by a lovely friend who also blogs and sews! I called it the Trees dress after her :) It's not the typical kind of print I go for (I affectionately call this a grandma print).

Well, I guess it's floral and in the colours I love, so most people would think this is actually totally a Jo print. But I have extremely specific floral criteria, believe it or not. Moi? Picky???
But I felt I could definitely make it work as it was on the Jo spectrum of florals. Haha.
I thought I'd just go for it and make it as over-the-top cute as possible, since that's what it seemed to be asking for.
I wasn't sure this would end up being a "me" garment, but I actually really like it!

I drafted the pattern myself from my bodice block (same old story as usual). 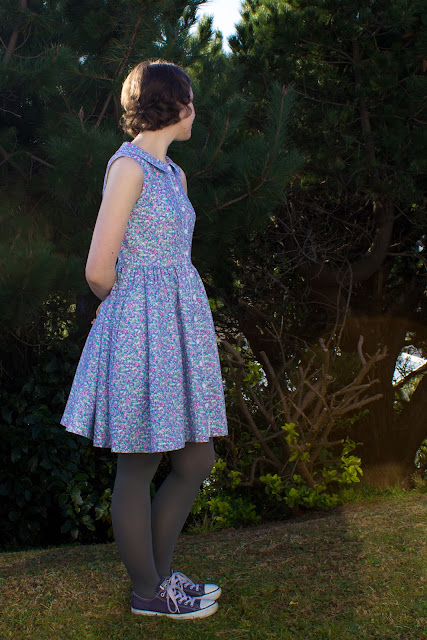 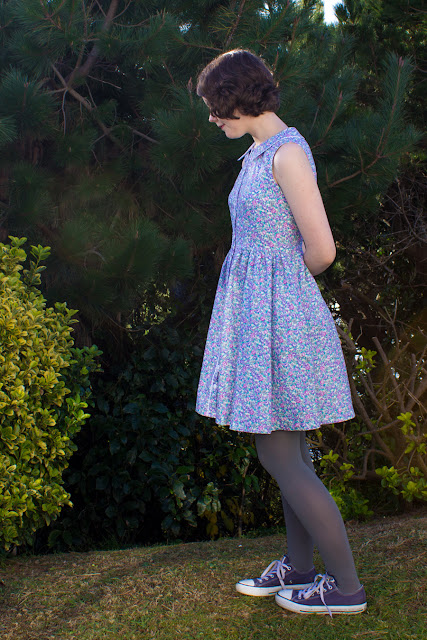 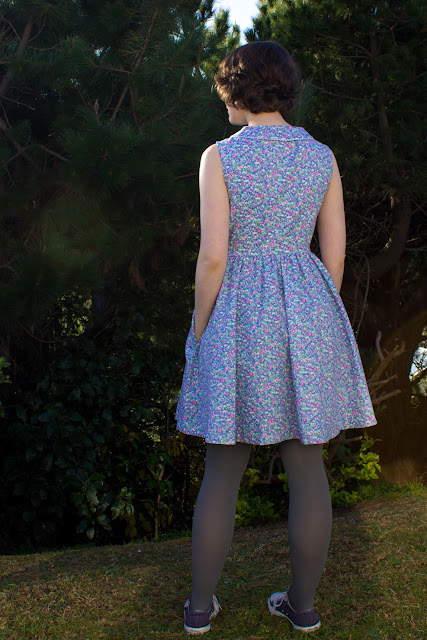 Because this isn't a pattern-drafting blog, I'm not going to go into the details of everything. Here's the summary!

Drafting details:
Scooping out the neckline slightly
Drafting the collar
Drafting the skirt
Converting darts into princess seams
Removing some width from the centre front, and replacing it with button plackets
Bias strips to finish the neckline and armholes

And after all that effort, I neglected to get a close up of the star of the show: the collar! Such a disgrace. Here is a cropped-in photo so you can see it a bit better. 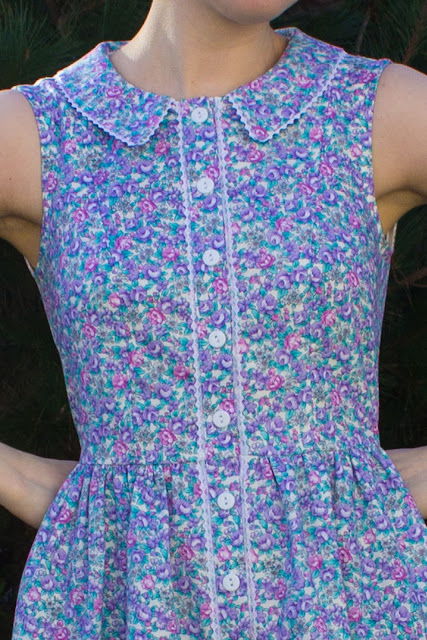 I sort of guessed at the size and shape of the front of the collar when I drafted it. Then I cut it out of calico (muslin for you U.S readers) and basted it onto my garment-in-progress. I decided to trim a little bit off to reshape the front points, and finalised my collar from there.


You know what is a pain with plackets? You have to be really careful when sewing them down, because they try to twist! Well, mine do. I think it's due to the feed dogs pulling the fabric on the bottom through at a faster rate. Sometimes I end up with a little bubble on the top layer that needs easing in. NOT a good look. It happened on the underneath placket on the bodice and it's so ugly. I let it slide because it won't be seen, but still... I need a solution here! 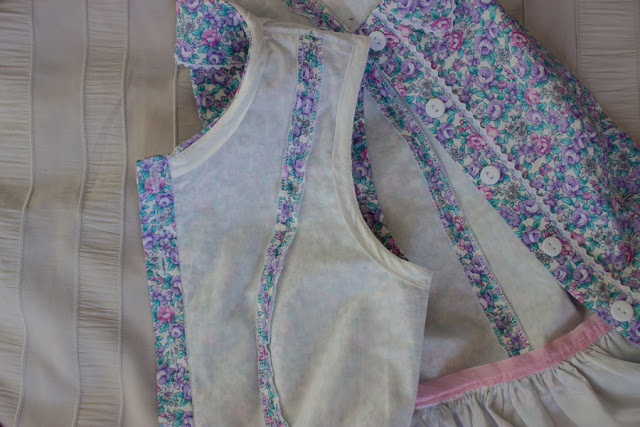 I underlined the bodice, because the cotton was lightweight and thin. I underline partly out of habit really. I supposed I could have just lined the whole thing, which would have meant I didn't need the bias facing on the edges! I AM a bit scared of lining, even though I've done it before, as it complicates the construction process. I'll have a go at lining next time.

That was partly an issue with this dress- the construction process! Since I self-drafted, I didn't have any instructions to follow, so I ended up doing some things in a silly order and then unpicking them when I realised I should have done X before Y (mainly involving the button placket!). 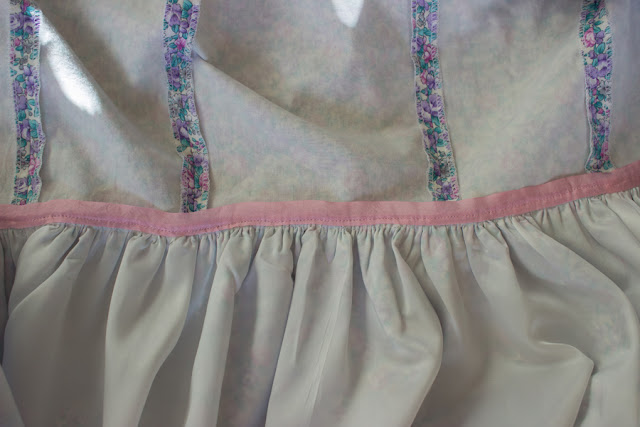 I added some rayon seam binding to the waistline seam allowance. Partly for the idea of a waist-stay (though I'm not sure seam binding is sturdy enough to provide support). Really, I just wanted an excuse for this pretty pop of pink, and to use the seam binding Sonya of Ginger Makes sent me, cos she's AMAZING. Kindest/coolest/most talented girl ever!!

I also opted to line the skirt. I used a cheap acetate, which does the trick, though I think we all know acetate is kinda nasty. The lining is caught into the centre front. I hemmed it before catching it into the placket.
Or rather, I eventually ended up doing this after after unpicking parts of the placket due to aforementioned construction snafus. So much redoing! 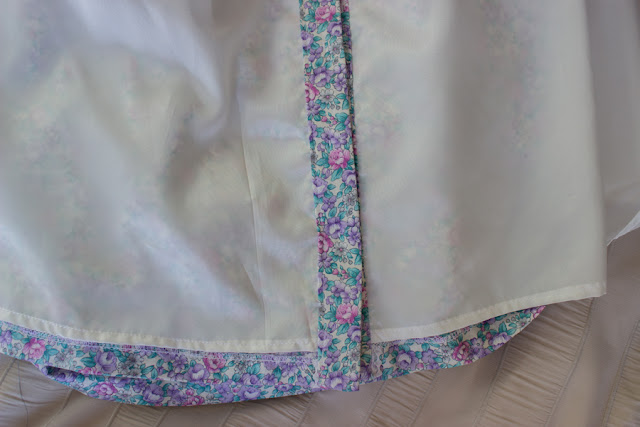 Levelling the hem on this was a pain, due to the order of construction I was making up as I went along. Meh. lol. Enough said about that! I've noted down what to do for next time.

After my previous skirt's blind hem wasn't stellar, I was giving my blind hem function a mistrustful side-eye, but went through with it anyway.... and it was beautiful this time! I put it down to highly cooperative fabric. It's so invisible (I'm sure the print helps too). I just overlocked the raw edges before blind hemming. 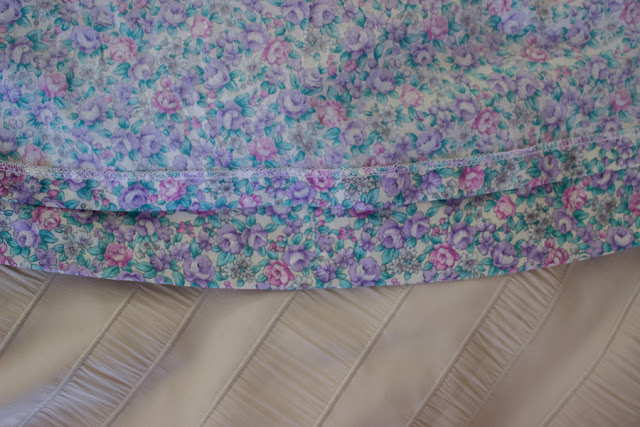 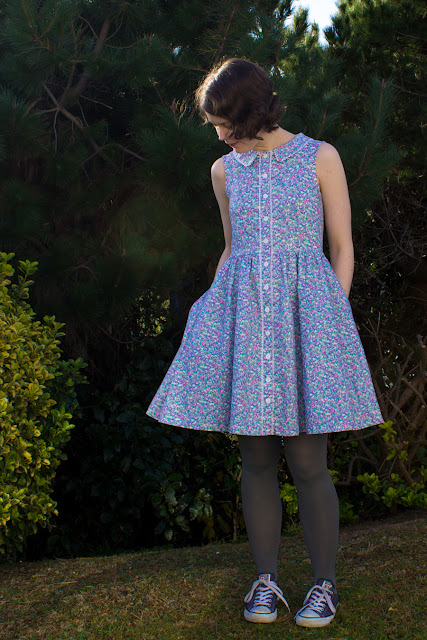 Fun fact: I was going to design some patch pockets once I had made the garment so I could decide their shape and placement on the body. Then I went into autopilot and managed to cut and completely sew inseam pockets into the side seams! I only realised what I'd done JUST as I finished congratulating myself on my pockets! Lol! Well, maybe less is more. Hah!

I'm proud of my drafting, even though it isn't anything mind-blowing. And I'd like to make another one!
I'm thinking for the next time I want to use a flat piping (no cord) in the same places as the lace. Ooh<3 Exciting! 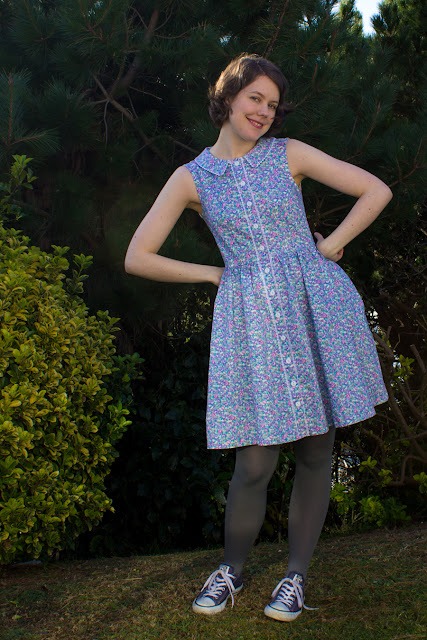 I know I like a garment when I start pulling goofy poses... lol :)
By the way, aren't I smart, making a summer dress right in the middle of winter? What can I say, the spirit took me... Looking forward to warmer weather guys!
Have you got any self-drafting in the pipeline? Do you find it worth your time? :)