Cardigan time! The pattern is Tenaya by Elizabeth Doherty. 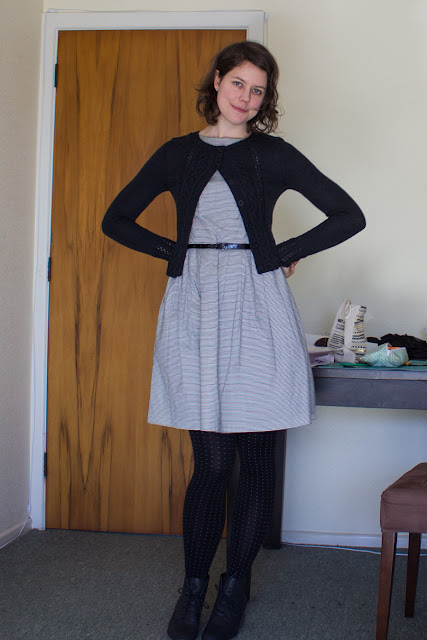 This is knit in 4ply, which is much lighter weight than I'm used to! The only other cardigan I've made in 4ply was my Honeybee Cardigan, which was mainly lace, and a lot smaller, so was quicker!
I quite enjoyed how long it took to knit this though. I don't feel the need to pump out lots of cardigans. Knitting a lot of 10ply garments as I learned was good- It helped me learn what I did and didn't like. But now I feel more confident, I would like to knit more lightweight-gauge cardigans, as I love the more delicate look, and they are a great layering piece for the warmer seasons!

And I'm also aiming for some more neutral-coloured cardigans. They may seem a little boring, but they are very versatile. And given my love for colourful dresses and skirts, sometimes it works to tone it down a little.

The whole body photos don't do the lovely details justice so here are some close-ups. 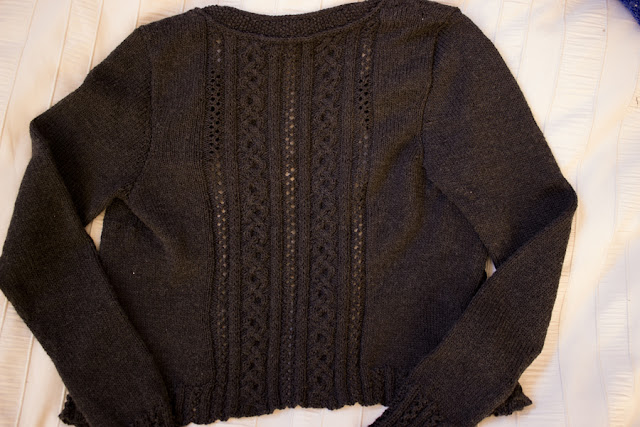 The cables and lace definitely increased time spent on this piece. Again, like last time I made my cables without a cable needle, which is a great technique, in my opinion! At least the sleeves were knit plain, which was a nice bit of mindless stocking stitch. I'm cheeky, so I would save the sleeve parts for lectures at uni, so I could knit away while still being able to listen. lol.

I was a big fan of how this pattern was written. It uses an elegant top-down construction which I have seen in some of the Andi Satterlund patterns I've made like Agatha and Chuck, and I'm a convert. Anything which eliminates seaming is great. And I love how I can try on top-down patterns as I go.
I love the design of the button bands. The moss stitch is lovely, and the neckband is done in an interesting way, with a few interesting set-up rounds before changing to moss stitch. It really makes a feature of the seamline!

OMG though you guys, I frogged so much on this cardigan. So much.
For example, after I'd picked up stitches for the sleeves, which are created with short rows, I knitted the whole sleeve cap and tried it on. It was too big! Gah! My own fault for not doing any calculations on the size of the sleeve... So I ripped the whole thing out and picked up less stitches the second time. (I've usually picked up about 1 for every 2 stitches when forming a top-down short-row sleeve cap. This pattern has you pick up more, which I thought must have been due to the small gauge, but it didn't work well for me.)


THEN, I did some calculations about the body size I'd selected (the smallest one). My numbers weren't adding up - the pattern was turning out 3 inches bigger than the pattern schematic noted!
I emailed the designer, who explained that the 3 inches extra is allowed because of the cables drawing the fabric in, thus making the garment smaller.
Well, I disagreed. Having already tried it on and seeing that it looked too big across the chest, I also thought that this calculation didn't work logically. The cable panels are interspersed with lace. And lace makes the gauge LOOSER, so would offset the tightness of the cables at least somewhat.

I ended up making the drastic decision to frog the partially completed sleeve (for the second time!), and rip back to the mid armhole. Not happy! My poor husband knows all about these moments as he bears the brunt of my whinging, haha.

So I decided to reduce the cardigan by twenty stitches. At mid armhole I added some decreases at the edges (rather than starting the cardigan again from scratch), and I also cast on less stitches at the bottom of the armholes. You can see the mid-armhole decreases in the picture above.

At the end of the day, I think I was a little over-zealous when reducing the size of the sleeve. It now fits very snugly, and I think I'd prefer a little more ease put back in. Lol :) Oh sleeves, when will I get you right? 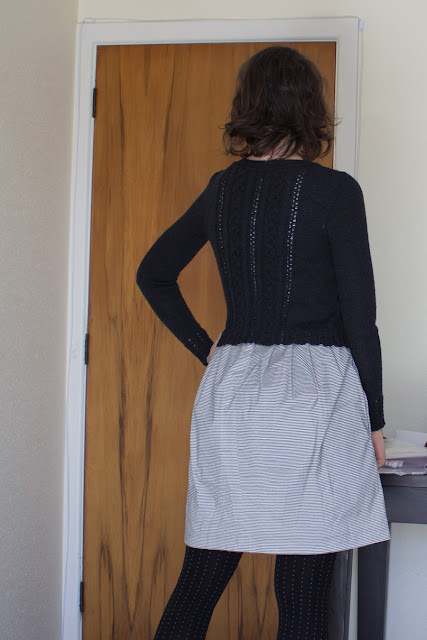 Anyway, the frogging wasn't finished. The neckband was another source of misery, as I first misread the directions for the fancy i-cord you do after picking up stitches. After ripping that out, I followed the directions correctly, but still got a bad result. The yarn overs were causing that row to look holey, horrible and loose. I think this is a flaw in the pattern, but I couldn't see anyone mentioning it on Ravelry, so maybe it's just me?? After getting bad results and asking for help from the designer, I eventually won and got it looking okay.
After all this, I can't even remember the details, other than going down 2 needle sizes instead of going up 1 needle size like the pattern suggests. 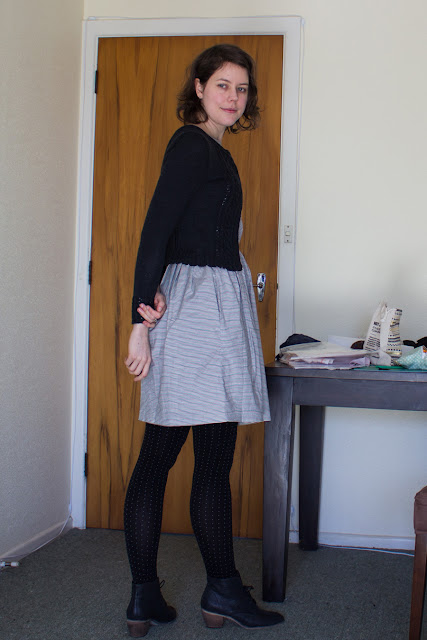 The dress I'm wearing is blogged here, by the way.
I'm glad I finally got around to blogging this as it was quite a lot of work! Too bad the dark colour hides the lovely details so well. And I still don't think dark colours are best with lace; I think I'll always prefer lace with light colours as it suits the airy nature of lace. Maybe I should make another in a different colour, heh :) 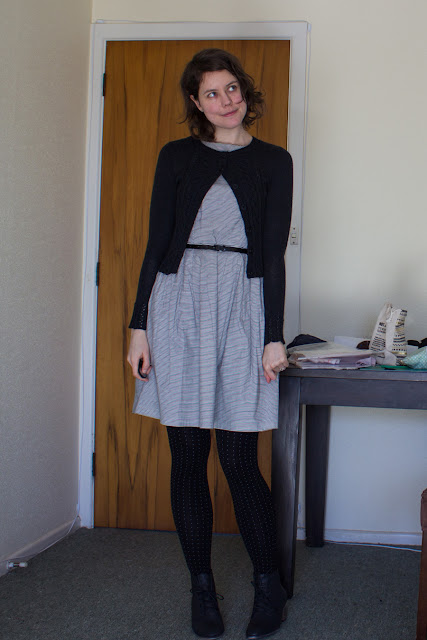